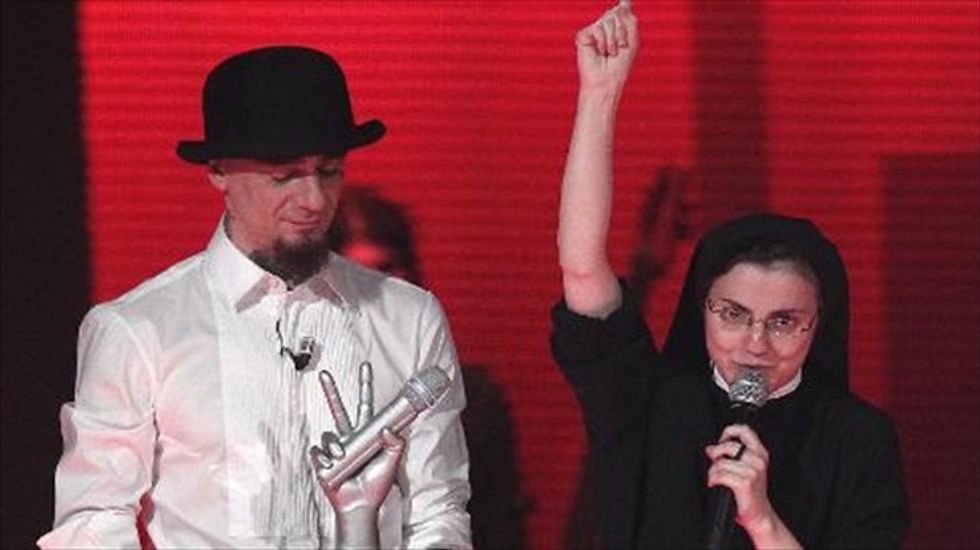 A singing nun clinched the final of The Voice of Italy television talent show contest on Friday after winning millions of followers with her lively dance act and soulful renditions of lusty pop classics.

Wearing her black habit and a crucifix around her neck, Sister Cristina Scuccia punched the air and thanked God for her victory, reciting an "Our Father" prayer to the puzzlement of organisers and audience.

"I want Jesus to come in here!" said the wholesome 25-year-old with a self-effacing manner, who was dressed in the sensible black shoes and ankle-length black skirt she has worn throughout the contest.

"My presence here is not up to me, it's thanks to the man upstairs!" said Sister Cristina after winning out against a 28-year-old hard rocker with long curly hair who had performed "Stairway to Heaven".

Suor Cristina, a reformed rebel who used to sing in a band and now lives with fellow nuns in Milan, has won a record contract with Universal but she hinted she might shun a full rock'n'roll career.

"I will go back to my priorities –- prayer, waking up early in the morning, school service.. That’s fundamental for me to be able to begin something new later on," the Sicily native told reporters.

Sister Cristina said she was following Pope Francis's appeals to bring the Catholic Church closer to ordinary people and was not shy about her newfound success.

"I have a gift to give, and I am giving it to you, what can I do about that? Jesus has called upon me. It wouldn’t be worth much if I kept it for myself," she said.

She shot to television fame in recent months in this predominantly Catholic country with her versions of songs like "Girls Just Want To Have Fun" and "Time of My Life" from the film "Dirty Dancing".

It was a performance of Alicia Keys's "No One" that first drew attention to her in March and she sang the tune again on Friday to cheers from an audience that included nuns from her Ursuline Order.

There was some confusion when one panel judge -- rock star Piero Pelu -- joked that she was the "devil incarnate", prompting the host to quickly step in saying this was meant with "maximum irony".

The talent show was also apparently being followed in the Vatican corridors of power, with top culture official Cardinal Gianfranco Ravasi tweeting a quote from a Roman thinker: "If we commit injustice, God will leave us without music."

Sister Cristina has already sung alongside Kylie Minogue and Ricky Martin during the show and Keys defined as "pure energy" her performance, which received more than 50 million YouTube hits.

She has also received a celebrity endorsement from actress Whoopi Goldberg -- the star of the 1990s comedy "Sister Act" where she is a singer playing a nun.

But Sister Cristina still defined herself as a "humble servant" and ascribed her sudden success to a "thirst for joy, for love, and a message that is beautiful and pure".

"Since Pope Francis talks of a bible of joy I think I'm on the right track," she said in the run-up to Friday's showdown.

Fame has brought media scrutiny, including interviews with an ex-boyfriend and with Claudia Koll, the director of the musical academy where she trained -- herself an ex-starlet who is now a lay sister.

"Cristina's personal journey has brought her to maturity and artistic fullness thanks to a mysterious and special force. By giving herself to the Lord, she has enriched her art," Koll said earlier.

Sister Cristina has said she was once distant from religion but was inspired to be a nun when she auditioned for a part in a musical about the founder of the Ursuline Order, Saint Angela Merici.

She became a novice in 2009 and worked for two years with poor children in Brazil before formally joining the order although she still has to take her final vows.

She may have won audience hearts but her popularity is not universal, even in Italy, and critics have ascribed her success more to novelty value than talent.

Singer Emma Marrone, who represented Italy in this year's Eurovision song contest, complained that the sensation surrounding the nun was "an insult to show business".

Watch Sister Cristina's performance, as posted online on Thursday, below.