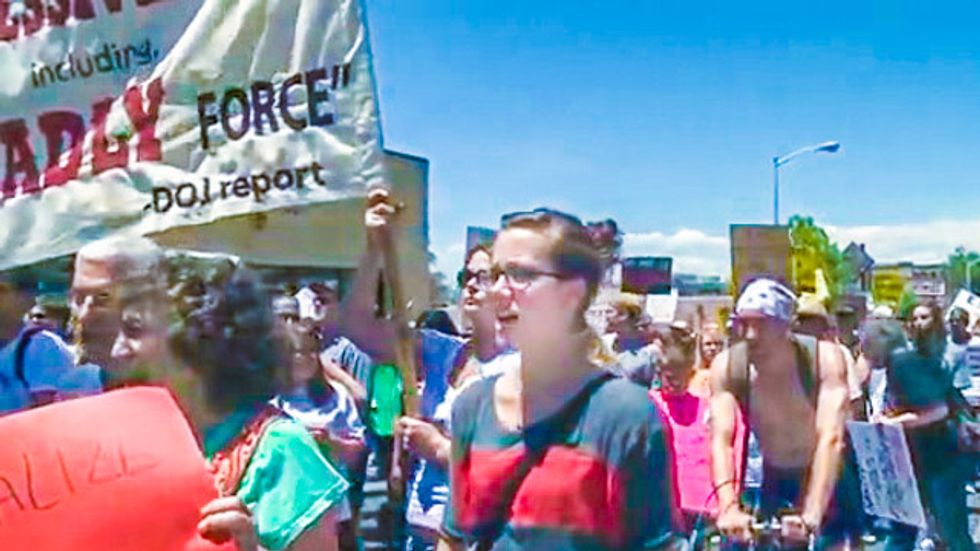 The Albuquerque Police Department insisted over the weekend that it sent an undercover officer who shot someone to infiltrate and film protests against deadly force in order to ensure the safety of demonstrators.

On Saturday, protesters gathered at Roosevelt Park for a mock trial of Police Chief Gorden Eden because officers had shot at least 36 people since 2010, killing 26.

While reporting on the mock trial, KRQE observed an undercover officer posing a protester, and filming other demonstrators. The station noted that the officer "wore a tie-dyed T-shirt, long hair brushed back out of his eyes, dark sunglasses and a lengthy, unkempt beard."

Albuquerque Police Department spokesperson Daren DeAguero told KRQE that the officer was recording the mock trial to "ensure [the protesters’] safety and the safety of the community.”

“I don’t understand how protecting us is infiltrating us,” Namaste pointed out. “We are peaceful, we were lawful, there was no issue with the people who were marching today so, why were they surveilling us? That doesn’t make sense.”

KRQE declined to identify the officer, but reported that he had shot 20-year-old Domonick Solis-Mora in the stomach during a 2010 drug sting.

“If that is true, that someone who has [shot] a member of our community, and that’s what we were talking about today, that is very upsetting for people to hear that,” Namaste remarked. “There’s no need for that.”

She said that organizers had worked with the Albuquerque Police Department for months while planning the event, so infiltrating the protest should not have been necessary.

“It’s very upsetting when we know that today, we exercised our right to peacefully assemble, and we were in constant contact with our police liaison with APD,” Namaste insisted. “So, this is inappropriate.”

“We don’t know what the APD is doing,” she added. “If they’re undercover, we don’t know. There isn’t any need. Nothing we’re doing is illegal … This is inappropriate that they would be putting us under surveillance, because we were peaceful and we have the right to assemble. And they were aware that we were doing this. We were in communication with them.”