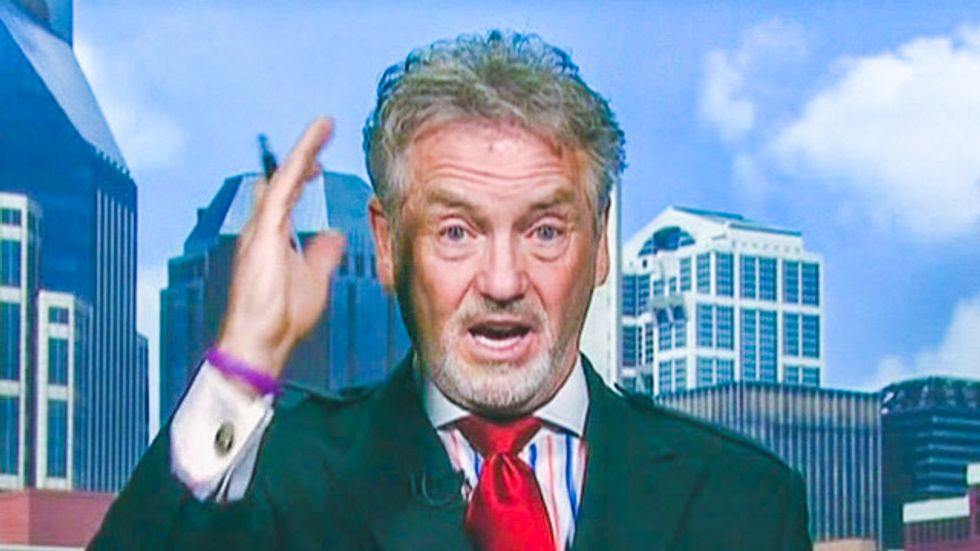 Country music singer Larry Gatlin ranted about his "half-breed Cherokee Indian" grandmother and the Washington "Redskins" football team on Sunday in an attempt to show that that liberals were not proud Americans.

A Pew poll released last week found that 60 percent of liberals did not "often feel proud to be American."

Without pointing out that the question had included the word "often," Fox News host Ainsley Earhardt invited Gatlin explain why liberals "are not proud to be an American."

According to Gatlin, "limousine Lear jet liberals" formed a coalition with "low-information voters" to elect a "doofus" named Barack Obama.

"He told us that he hated America," the country music star insisted. "In defense of low-information voters, I knew one. Little half-breed Cherokee Indian -- yes, that's Cherokee Indian for you Florida State Seminoles and Washington Redskins."

"Here's what we have, we have old hippies from the '60s, Bill and Hillary [Clinton], ruling our country, not governing our country," Gatlin continued, arguing that liberals were upset when the country took military action because "they don't believe there is a right or wrong."

"They blame America, they blame Bush, they wrap their robes of self-righteousness around them, get in their Lear jets, and take off, and they're still mad at me," he quipped. "Love it or get out of my face!"

"The liberals, they'll sing 'Kumbaya' but they won't stand up and sing the Marine Corps Hymn!" Gatlin exclaimed, adding that President Obama did not know how to pronounce "Marine Corps."

"Who elected this doofus anyway?" he asked. "The liberals and the low-information voters."

U.S. Senator Marsha Blackburn (R-TN), one of the most devoted acolytes of former President Donald Trump, on Thursday tried to gaslight her constituents in a lie-filled attack on the House Democrats' bill that protects and expands voting rights.

The House passed HR1, the For the People Act, by a narrow 220-210 margin on Wednesday. It now heads to the Senate where it will face extreme opposition. The bill is extremely popular with U.S. voters, but not with GOP senators.