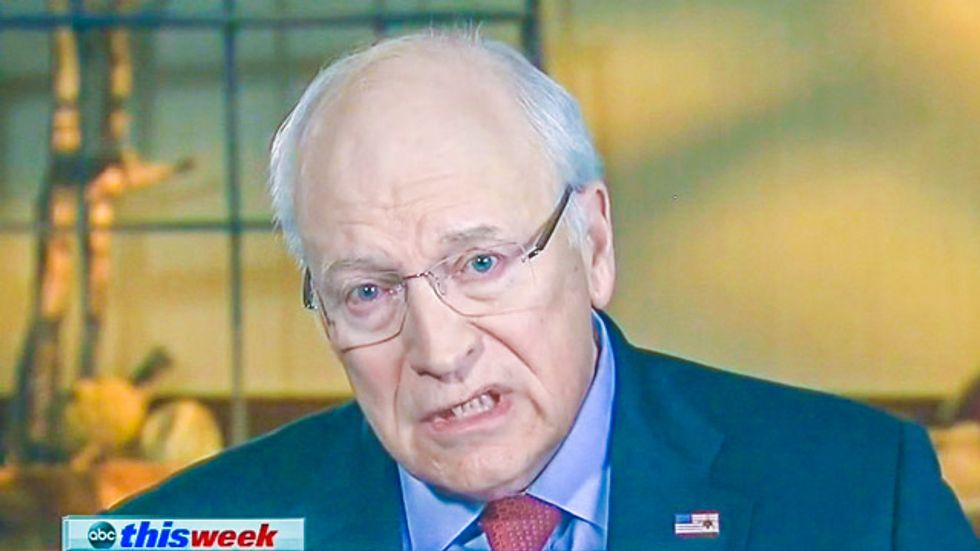 Former Vice President Dick Cheney on Sunday insisted that he did not "intend any disrespect" when he suggested that President Barack Obama was guilty of treason by trying to undermine the United States before leaving office.

In a Wall Street Journal op-ed last week, Cheney -- and his daughter Liz -- said that the president was "determined to leave office ensuring he has taken America down a notch."

He went on to suggest that Obama was a "fool" if he intended to work with Iran to prevent violence in Iraq.

“In this op-ed, you suggest the president is a fool,” ABC's Jonathan Karl pointed out during a Sunday interview with Cheney. “That is the word you used, 'only a fool would take the approach he’s taking in Iraq right now.'”

“It almost seems like you’re accusing the president of treason, that he’s intentionally bringing America ‘down a notch,’” Karl noted.

Cheney did not deny that he had accused the commander-in-chief of the United States of treason, but he insisted that he had not just called Obama a "fool" over the violence in Iraq.

"They're still living back in the day when they claim that we got [Osama] bin Laden, the terrorism problem is solved," he continued. "That wasn't true then. It's even less true today."

"Now I don't intend any disrespect for the president, but I fundamentally disagree with him," he added. "I think he's dead wrong in terms of the course he's taken in this nation, and I think we're in for big trouble in the years ahead because of his refusal to recognize reality."

During the interview, Karl also pointed out that critics on the left and the right had said that it was Cheney who had been wrong on foreign policy "over and over again."

"With all due respect, Jon, I was a strong supporter [in 2002] of going into Iraq, I'm a strong supporter now," Cheney remarked. "There's nothing to be argued about there. If we spend our time debating what happened 11 or 12 years ago, we're going to miss the threat that is growing, and that we do face."