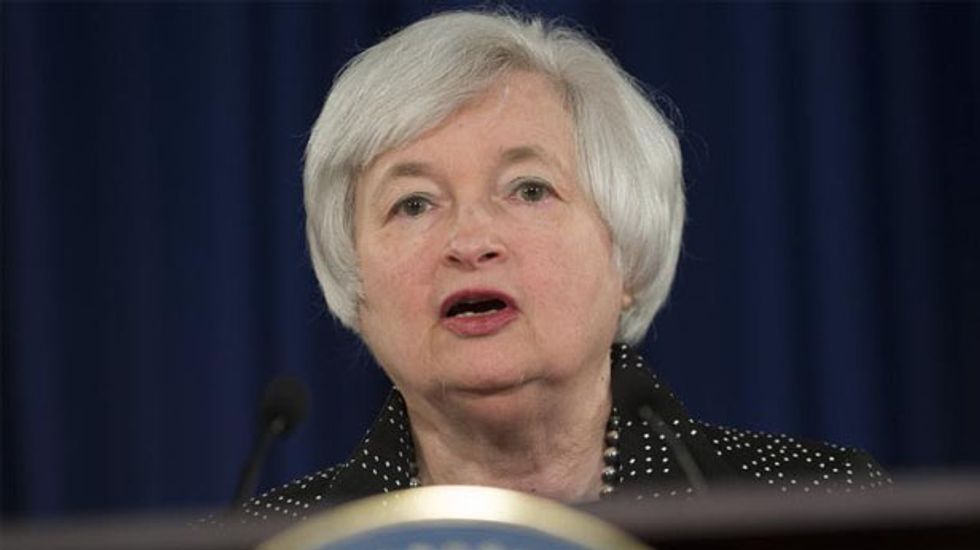 The Federal Reserve slashed its 2014 growth forecast for the US economy after the rough winter but kept policy on hold on Wednesday, showing faith in a modest rebound.

Fed Chair Janet Yellen said the economy had picked up after the first quarter's contraction, but she also downplayed a pickup of inflation as any sign of a need to tighten monetary policy.

As expected the Federal Open Market Committee cuts its stimulus program back by another $10 billion, to $35 billion a month, compared with $85 billion in December before the taper began.

It also left the benchmark federal funds interest rate at 0-0.25 percent, where it has been since the end of 2008, arguing that the economy still needs such extraordinary accommodation into next year, when the rate is expected to rise.

The FOMC "believes that economic activity is rebounding in the current quarter and will continue to expand at a moderate pace thereafter," Yellen said at a post-FOMC meeting news conference.

But, even with the unemployment rate having fallen quickly over the last year, to 6.3 percent, she said, "unemployment remains elevated, and a broader assessment of indicators suggest that underutilization in the labor market remains significant."

US stocks, which were trading slightly lower ahead of the FOMC announcement, liked the news and finished higher, the S&P 500 rising 0.8 percent to a new closing record of 1,956.98.

US Treasury bond yields were lower, and the dollar meanwhile fell 0.4 percent to $1.3590 per one euro.

The FOMC now estimates economic growth this year at 2.1-2.3 percent, sharply down from the March prediction of 2.8-3.0 percent, before the depth of the winter setback was known.

And, in an issue markets were mainly focused on, the central bank's policy makers left their forecast for interest rates largely intact.

The expected timeline for an increase in the fed funds rate off the zero level remains the middle of next year, with the median prediction for the end of the year 1.125 percent, a slight rise from 1.0 percent expected in March.

"The Fed seems to be suggesting that the recent pickup in inflation doesn't materially change its near-term outlook for monetary policy since they still expect a gradual return to normal," said Paul Edelstein, an economist at IHS Global Insight.

"In particular, the Fed has no intention of raising interest rates this year and will most likely wait until the second half of next year."

But he said the slight uptick in the expected trajectory for interest rates shows that some of the FOMC members "are beginning to agitate for a quicker rate hike."

Yellen revealed no expectations of a significant acceleration of growth, nor of any immediate dangers to the economy. She said that the deepening sectarian conflict in Iraq, is "a concern with respect potentially to energy supplies and prices."

But she said the Fed also has its eyes on risks in financial markets, where an uncommonly low level of volatility, combined with the large supply of cheap money, has raised worries among other analysts of a buildup of asset bubbles and systemic risks.

"This environment of low volatility is very much on my radar screen, and would be a concern to me if it prompted an increase in leverage or other kinds of risk-taking behavior that could unwind in a sharp way and provoke a sharp, for example, jump in interest rates," Yellen said.

"And we've seen what effect that can have on the global economy, and I think it's something that is important to avoid."

Even so, she stressed, the Fed still has not seen any broad-based increase of leverage in financial markets, or other trends that might have heightened risks to the financial system.

"And we are using supervisory tools and regulations, both to make the financial system more robust and to pay particular attention to areas where we've spotted concerns like leverage lending."