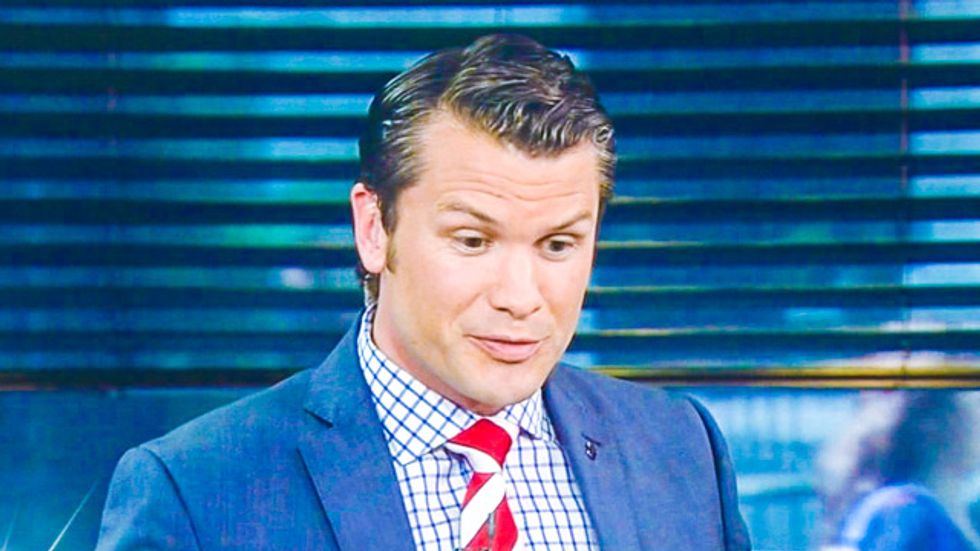 Fox News analyst Pete Hegseth suggested on Tuesday that the arrest of a suspect in connection with 2012 terrorist attacks in Benghazi may have been a conspiracy to help former Secretary of State Hillary Clinton just hours before she was scheduled to talk to the conservative network.

After Fox News broke the news on Tuesday that U.S. forces had detained Ansar al-Sharia commander Ahmed Abu Khattala, Hegseth said that he was pleased, but "we all have questions about the timing."

"You have the former secretary of state, who is in the middle of a really high-profile book tour, and I think this is convenient for her to shift the talking points," Fox News guest host Lisa Kennedy Montgomery noted.

"Something clearly changed in the calculus of the United States, and I think a lot of it does have to do with the State Department," Hegseth agreed. "I think this thing needs to be tied in a bow for certain individuals to have a clean break from an incident that has become, and will continue to be a scandal -- an anchor around a certain individual's neck, who may want to run for president."

"She's having an interview today on Fox News," co-host Kimberly Guilfoyle pointed out.

"What a great thing to announce on an interview tonight at Fox News, that the perpetrators have been brought to justice," Hegseth remarked. "It's all too neat, and it's too cute. And I want to be grateful, I want to give the benefit of the doubt to our authorities, but in this case it feels too neat on the timeline."

Montgomery said that she also "questioned some of the political motivations" of arresting Ahmed Abu Khattala at this time.

Watch the video below from Fox News' Out Numbered, broadcast June 17, 2014.