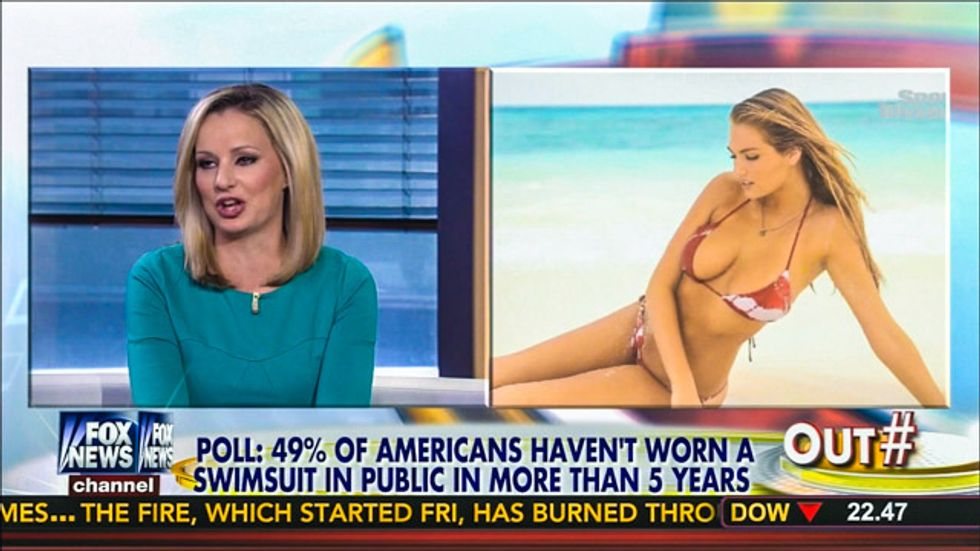 Fox News host Sandra Smith on Monday pointed to images shown on her own network as one of the reasons women have unrealistic expectations about their bodies.

During Monday's episode of Out Numbered -- where four female hosts are joined by one male guest host -- Brian Kilmeade noted that a recent Harris poll had found that 25 percent of women had not worn a bathing suit in public in more than 5 years.

"Swimsuit shyness is making people feel like they can't go to the pool, they cannot go the the beach because they're so self conscious about their bodies," Kilmeade explained.

Co-host Jedediah Bila agreed that "bikinis are the devil" because "all women feel like we're so exposed in a bikini."

As the discussion continued, Fox News used a split screen to show video of Sports Illustrated models posing in bikinis.

"I'll tell you what the problem is, Brian," Smith observed. "It's the images we're showing right now! It's Kate Upton in a swimsuit, OK? And the fact that you couldn't even say 'Sports Illustrated swimsuit issue' without stumbling over here."

"I think people are just constantly -- these images are pushed in their face, and they think they're supposed to look like that when they get in a swimsuit," she added.

"If someone has determined that they have too much junk in some places, I trust their judgment," co-host Harris Faulkner opined. "Cover up, buttercup."

"So, you welcome the shyness because usually shyness is justified," Kilmeade concluded.

And Smith's comments made have temporarily had an impact because Fox News cut the bikini b-roll video for the remainder of the segment following her remarks.

Watch the video below from Fox News' Out Numbered, broadcast June 16, 2015.