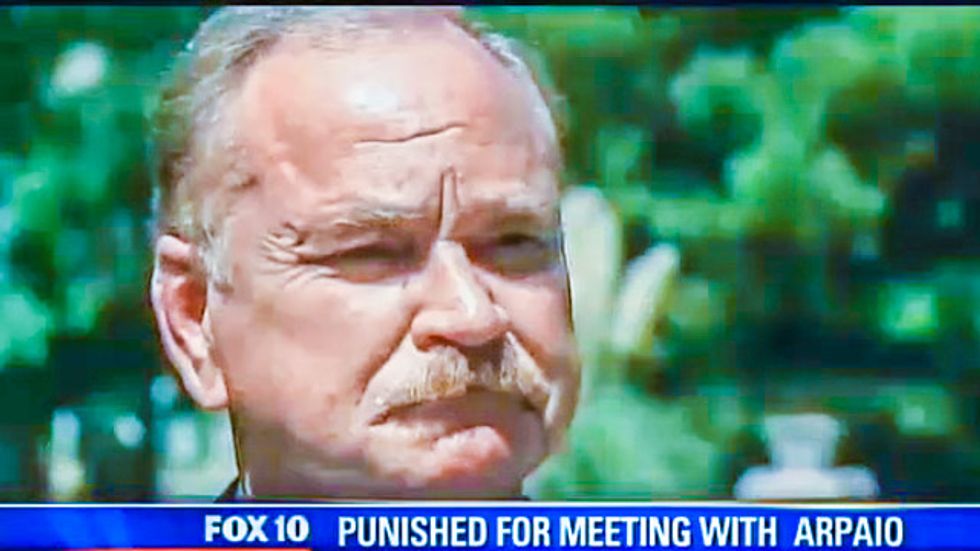 A Georgia police chief resigned last week after being suspended for sending racist text messages to his officers.

On Friday, Grantville Mayor Jim Sells announced that Police Chief Doug Jordan had been suspended for seven days, but did not explain why.

The city council was expected to take up the case during a closed meeting on Monday. But Jordan offered his resignation before the council meeting, allowing him to avoid an investigation.

The Times-Herald reported on Monday that the resignation had been connected to texts Jordan sent to officers, which included the N-word.

“When we approached the chief in regards to these allegations, he did not deny them and accepted some culpability,” Sells explained. “Following this revelation, he was immediately placed on suspension.”

Jordan's resignation letter thanked city employees, who he said were "like family to me."

The city council was not expected to review the case at Monday's meeting because Jordan was no longer a city employee.

Councilman Johnny Cooks said that council rules were unfair because city employees could break the law, and avoid an investigation by resigning.

"We’ve had more than our fair share of unethical behavior in this town. But they allow people to keep resigning, which means that investigations never happen,” Cooks said. “So, if someone breaks the law, and then decides to just ‘move on’, that’s okay? We keep allowing these men to resign and it then it doesn’t go on their record so as a result, it’s a perpetual cycle."

But Cooks said that the most shocking part of the case was that only one officer came forward to report that Jordan had used racist language in his text messages.

“To me, it verifies that there are underlying issues in our police department,” Cooks insisted. “If someone decides that they’re going to complicitly work for someone like that, it speaks volumes.”

Jordan was suspended for a week last year after he violated the rules by failing to notify the city that he had traveled to Arizona to meet with Maricopa County Sheriff Joe Arpaio.

“I was very interested in how he described his ability to make people mad at him by simply enforcing the state and federal laws he is sworn to uphold,” Jordan said at the time. “I told him, ‘It’s this simple, we the people of the United States, either citizens or politicians, do not have the pleasure to pick and choose which laws we will abide by. As law enforcement officials, we do not get to pick and choose which laws we enforce.’”

“I plan to make a change here in Grantville,” he added. “And being as tough on crime as Sheriff Arpaio is will help make the city of Grantville a safe place to live and raise a family. We are on the right track now.”

Watch the video below KSAZ, broadcast in 2013.

Sheriff Joe Defends Georgia Police Chief Suspended for Visiting Him from Stand With Arizona on Vimeo.