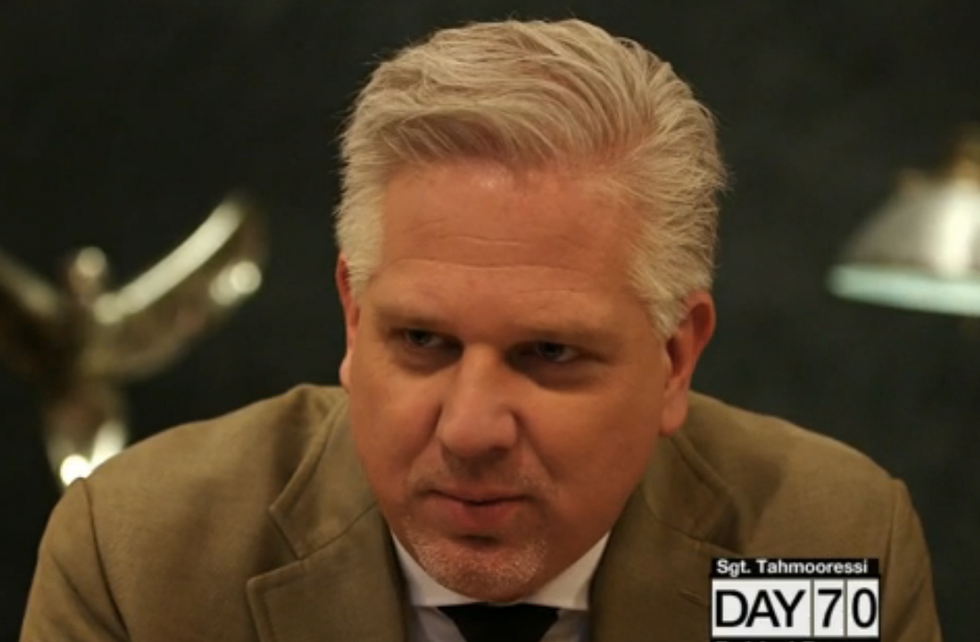 On Monday, Glenn Beck welcomed the conservative graphic artist known as SABO to Blaze-TV's "The Glenn Beck Program." The two men lamented the "liberal-dominated cultural landscape" and declared that Republicans have "no creative people to push their message."

SABO, a former Marine, appeared with his face blurred out to obscure his real identity. He gained national attention earlier this year when he made a photoshopped poster of Tea Party darling Sen. Ted Cruz (R-TX) when the Texas senator was visiting Los Angeles. The image showed Cruz covered in gangster tattoos and smoking a cigarette.

One recent work was a depiction of Texas state Sen. Wendy Davis (D), who he called "Abortion Barbie" and pasted her head on to a plastic doll with its abdomen cut open to reveal a full-term baby.

Regarding another poster, called "Fag the New Ni**er," SABO complained to Beck that he's not allowed to say the name out loud.

"You know it bothers me that you can't say the name," he said.

"I mean, we are such a politically correct environment that you can't even say 'fag the new ni**er,'" said Sabo. "Why is that? It's a word."

"I know that. But you know what the reality is," said Beck.

"The reality is that my stepfather used to call me 'Little Ni**er," Sabo countered, "and I called him 'Big Ni**er.'"

"I believe with a lot of words," he said, "they can be said a number of ways...I was at a Prop. 8 rally and I saw these two men putting these protest signs together. And one looked over at the other and said, 'We fags are the new ni**ers.'"

Beck said that liberals' desire to control speech has now gone beyond speech and into "thought police."

"I'd say the whites in general have been beat down so much. It's like with the Republicans, you dare not say anything without fear of getting hit over the head," said SABO.

"The black community," he asserted, "is never going to get back on its feet if it keeps embracing the very people that are putting them on their knees. And, it's like, you have to be able to stand up and say these things, but unfortunately today, you almost have to say it with a mallet because that's the only thing that people listen to."