Harry Reid on Iraq: 'The wrong side of Dick Cheney is the right side of history' 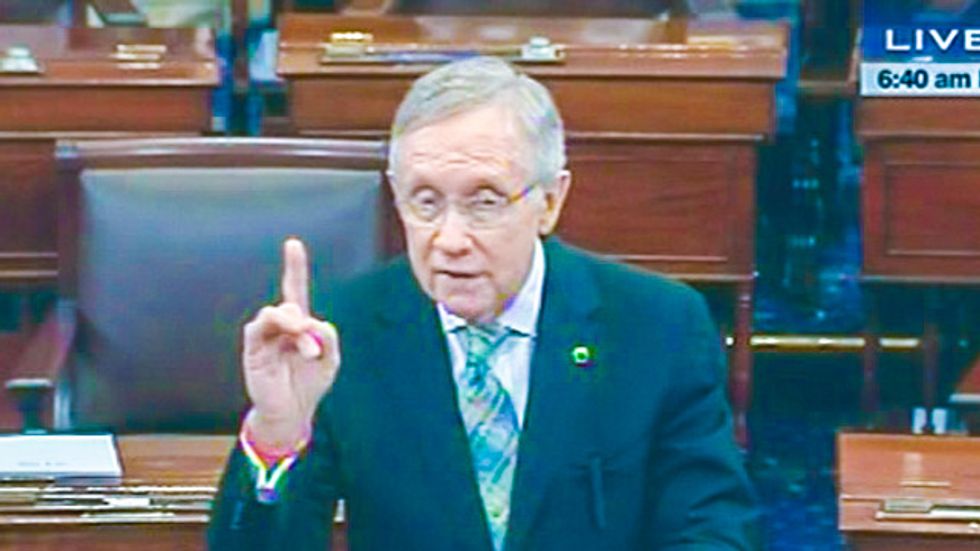 Senate Majority Leader Harry Reid on Wednesday lashed out at pundits who had pushed for the Iraq War during President George W. Bush's term, and were now calling on President Barack Obama restart war efforts.

In a speech on the floor of the Senate, Reid accused Republicans of reacting to new violence in Iraq by "listening to the same neocons" that had led the country into war in the first place.

"And what, Mr. President, is absurd is the fact that after all these years, their suggestions haven't changed," Reid said. "They're in a time warp. Those who are the so-called experts are so eager to commit American forces to another war."

The Nevada Democrat called out Paul Wolfowitz, deputy secretary of defense in the Bush administration, for making the "bizarre" statement that Iraq had no history of ethnic violence. Reid also recalled that conservative columnist Bill Kristol had predicted that Americans would be welcomed as liberators, and he was still being asked to go on television so he could call for more military action now.

But it was Cheney "beating the drum along all of his neoconservative friends" with an op-ed in the Wall Street Journal that really offended Reid.

"Just to remind everyone, former vice president of the United States, who was clearly the chief architect of the war," the Majority Leader said. "If there's one thing this country does not need, it's that we should be taking advice from Dick Cheney on wars."

"Being on the wrong side of Dick Cheney is being on the right side of history," he added.

In conclusion, Reid rejected the advice of Iraq war architects, who he said caused the "biggest foreign policy blunder in the history of the county."

"Thanks, but no thanks," he quipped.