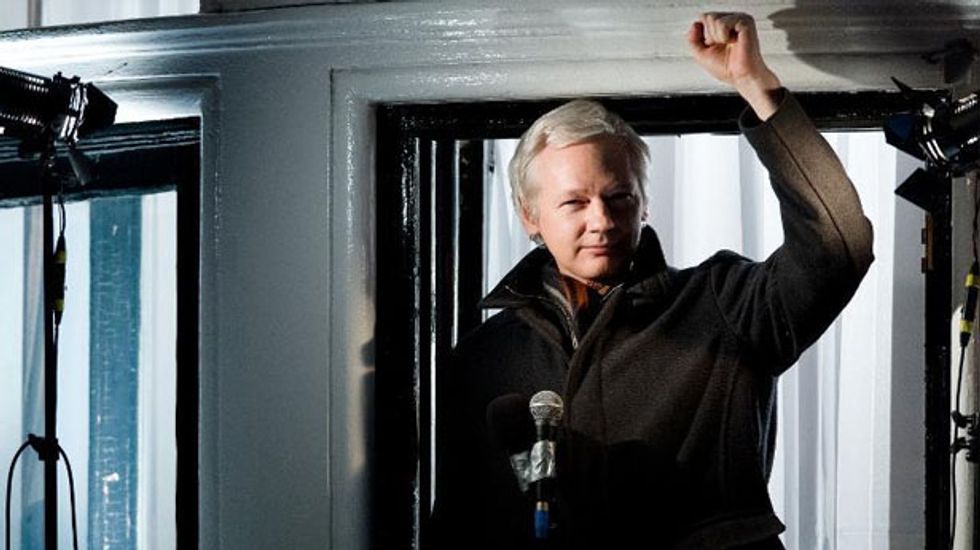 Two years after he sought asylum in Ecuador's London embassy, WikiLeaks founder Julian Assange is making a fresh attempt to secure his freedom, although he is not packing his bags just yet.

Lawyers for the Australian former computer hacker will next week present "new information" to the Swedish authorities in a bid to get them to drop a four-year investigation into allegations of sexual assault, which he denies.

Assange sought refuge in the embassy to avoid extradition to Sweden, which he fears is a pretext for transferring him to the United States, where WikiLeaks sparked an uproar with its publication of thousands of secret documents.

Speaking to reporters on a conference call marking two years since his confinement on June 19, 2012, Assange railed against the US authorities and expressed his support for fellow whistleblower Edward Snowden.

The 42-year-old has been advising and helping raise funds for Snowden, a former CIA intelligence contractor who released thousands of US secrets last June and has now been granted temporary political asylum in Russia.

WikiLeaks has declined in prominence in recent years, but Assange said it was still working behind the scenes and was not in competition with Snowden.

"Our role this year has expanded in relation to the ongoing protection of Edward Snowden, which I believe shows us working at our best," Assange said.

His lawyers said they would make a new filing in his Swedish case in a Stockholm court on Tuesday, although they declined to give details on the "new information".

Assange acknowledged that getting the Swedish investigation dropped was only one part of the legal battle that keeps him holed up in the embassy.

"I still have the larger problem, which is that of the United States and its pending prosecution, and perhaps extradition warrant," he told reporters.

"However, the removal of the Swedish matter will prevent what has been an extremely distracting political attack which has been to try to draw attention away from what is the largest ever criminal investigation by the Department of Justice into a publisher, and into me, personally."

Ecuador accepts Assange's concerns about a US prosecution, and President Rafael Correa said this week that he can stay in the embassy "for as long as he needs", saying it was up to Britain and Sweden to reach an agreement.

But Britain refuses to allow Assange safe passage out of the embassy -- and is spending millions of pounds (euros, dollars) a year in round-the-clock security.

A year ago, the British and Ecuadoran governments agreed to set up a working group to find a solution to the impasse, but there has been no sign of progress.

Assange accused Britain of "unilaterally" cancelling the talks following his support for Snowden, although the Foreign Office rejected this.

"As ever we look to Ecuador to help bring this difficult, and costly, residence to an end," a Foreign Office spokeswoman said.

Last year, Assange described his life as like living on a space station, where he exercises on a treadmill and uses a sun lamp to make up for the lack of natural light.

He said this week that he had managed to watch World Cup matches and is naturally supporting Ecuador.

"The reception in this building is quite difficult. But perhaps it makes it a bit harder for the bugs (listening devices) to transmit through the walls as well," he said.

Assange remains deeply concerned about surveillance, accusing the police guarding the embassy of monitoring all his visitors.

However, he acknowledged that he had protections that did not exist for many people exposing secrets around the world.

"I am in an effective jurisdiction where I cannot be subpoenaed -- there cannot be any police knocks in the night or in the day," he said.

More than 30 free speech organisations will be writing to US Attorney General Eric Holder urging him to "close down" the investigation into WikiLeaks, Assange's lawyers said.

Some 59 international rights organisations are also planning submissions to the United Nations condemning pre-trial proceedings in Sweden, in support of Assange.