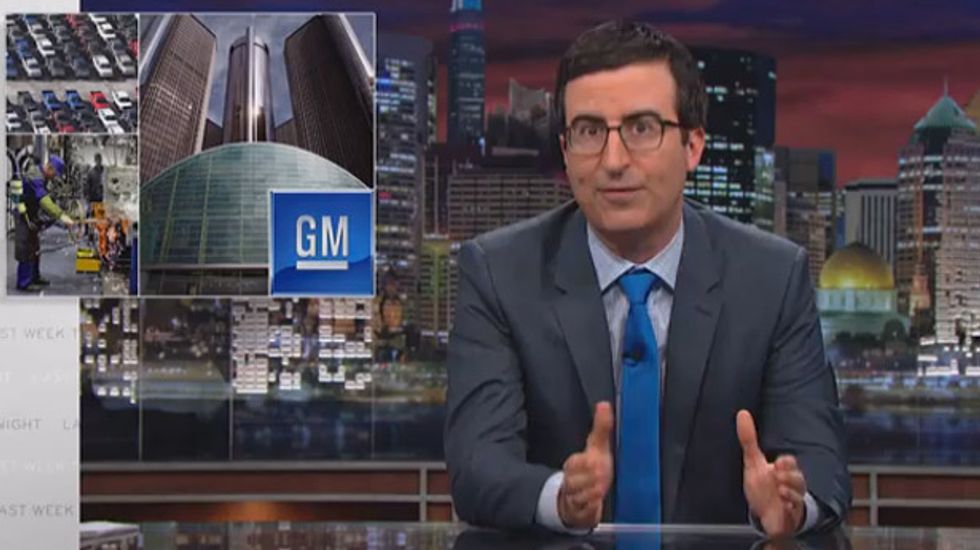 In just six weeks of his show Last Week Tonight with John Oliver, the British satirist has become a star of the counter-culture, playfully taking aim at FIFA and the National Security Agency – and pushing the boundaries of comedy

First it was former National Security Agency director General Keith Alexander. He was asked if he would favour renaming the intelligence agency Mr Tiggles. Then came General Motors, criticised for endangering customers; then the idiocy of denying climate change; the death penalty; net neutrality (the principle that all data on the internet should be treated equally); Syrian dictator Bashar al-Assad's love of Right Said Fred's I'm Too Sexy; then, last week, a 12-minute rant about Fifa, calling it "cartoonishly evil" and comparing it to a stomach-turning internet video clip, Two Girls One Cup.

It's only six weeks since HBO unleashed Last Week Tonight with John Oliver and with each late Sunday evening edition the 37-year-old comedian, born in Birmingham, brought up in Bedford, educated at Cambridge, and who made his name on The Daily Show with Jon Stewart, has become more established as the star of TV counterculture. Friends say that he is a prankster, but he might be more than that: pundits are talking about a new, more calls-to-arms direction for US political satire.

Two weeks ago, in an attempt to stir outrage over net neutrality – two words, he conceded, more boring than "featuring Sting" – he invited viewers to register their opposition to a two-speed internet, which would allow enhanced speed for certain users, with the Federal Communication Commission. The following morning the commission's website overloaded with traffic and crashed.

Oliver's remarkable success runs counter to recent trends. After former tabloid editor Piers Morgan was fired from CNN, there were warnings that the US media was now poisoned to British accents and supposed superciliousness. But Oliver's self-deprecation is disarming and serves him well. Four million viewers tune in to the show every week and two million more watch online the next day. Oliver's comic diatribes are becoming Monday's workplace conversation.

"We didn't crash their website, Charlie – that's a huge accusation," Oliver told CBS host Charlie Rose after the commission edition. "We merely pointed people to their website and told them why they should be angry about it, and they went in droves."

Oliver says it's a work in progress – the show's writers haven't settled on a format. But the basic idea is fixed: to take topics from the week's news and turn it into agitprop comedy that serves no agenda so much as laughter.

"It's not a surprise," says one TV executive familiar with the US late-night comedy business. "He's got a traditional Englishman's gift for telling Americans what to do and he's very good at it. He's lovable with a wonkish quality that let's him get away with some strident talk."

But for many TV viewers, it is Oliver's willingness to push boundaries that is setting him apart from the political punditry class. "He's offering an explicit call to action that's unique," saysDannagal Young, who teaches satire and the psychology of political humour at Delaware University. "He's interacting with a topic, not just commenting or issuing a broad judgment."

Young says contemporary satirists have been reluctant to compromise their status as outsiders. Political satire, she points out, is an art that traditionally lies outside the political spectrum. But she says people on the left have grown frustrated with satirists such as Stephen Colbert and (Oliver's former boss) Jon Stewart who are adept at identifying problems but rarely cross over into agitation.

Four years ago, in 2010, Colbert and Stewart hosted the Rally to Restore Sanity, which attracted 250,000 to the Washington Mall. But where rightwing radio jocks would be likely to use a stage for political grassroots action, the two TV hosts passed. "It was really just a music and comedy festival," says Young. "People were frustrated. They wanted to be asked to do something. Stewart and Colbert had tapped into something people were yearning for – a voice of reason, talking truth to power – but without being asked to do something, people felt they'd been hung out to dry."

With a career path characterised by fortuitous timing, Oliver arrived at HBO after seven years at The Daily Show that included three months standing in for Stewart as host last summer. "He learned at Stewart's knee," says the TV executive. "Oliver is a little bit more of a prankster than Jon – a prankster who is enjoying using his soapbox to steer his viewers toward mischief." Oliver's performance as host so impressed HBO bosses that they offered him a slot (after the hit drama Game of Thrones) with none of the restrictions over content that typically come with TV.

Last Week Tonight has made television so surreal that it only just qualifies as comedy. Oliver and General Alexander seemed equally startled to be facing each other. It was an extraordinary "get" for Oliver, as well as an odd choice of venue for a public official who'd guided the NSA through the Edward Snowden affair to appear on.

Oliver might be able to get away with more, not only because he is on HBO but because as a foreigner – an outsider – he is considered neither from the left nor right. Oliver's playfulness gives him licence to criticise that which in hosts Bill Maher or Piers Morgan comes off as aggressive, preachy or so politically skewed as to be pandering to one cause or another. "It's part of his strength," says Young. "He doesn't trigger people's immediate ideological responses. He's about people and power, not about politics."

Last year, at The Daily Show, Oliver told the Guardian he did not consider what he did as journalism or social criticism but something on the borderline. Three weeks ago he broadcast a prolonged shot of male genitalia he said symbolised the Republican Senate minority leader, Mitch McConnell. "HBO is the moral wild west," Oliver said. Then he went after General Motors over its failure to report ignition problems in its cars that appear to be behind a dozen fatalities. "To do a very aggressive piece on [General Motors] before a congressional investigation, that's potentially a problem on commercial TV."

In a recent interview with the Hollywood Reporter, Oliver, the eldest of four children of schoolteachers, described himself as a child of the Thatcher era. "I think it's hard to be apathetic when you're raised under Margaret Thatcher; you're going to get pushed one way or the other," he said. At Cambridge, he joined the Footlights, where, he has said, he "learned how to fail". Later moving to London with fellow comedian Richard Ayoade, Oliver supported himself with odd jobs, including working for a man who fenced stolen kitchen equipment. On one occasion, he was sent across London in a cab with about £5,000 and a knife. "I said, 'If anyone tries to rob me, I am giving him the money and the knife,'" he has recalled. "I think he just found me amusing to have around. Our lives were not supposed to intersect in any way."

Oliver had not even been to America when he got the job on The Daily Show, apparently on the recommendation of Ricky Gervais. Gervais knew him from his work with Armando Iannucci, who hired Oliver in 2003 to write for Gash, a week-long radio programme that coincided with British local elections. Oliver proved himself a sharp cultural critic. On radio, you learn to write with focus and make each word count, Iannucci recently told the Hollywood Reporter. "And John was fantastic at that. He would throw out these comments and observations. I instantly relaxed because I knew I was with someone who was completely comfortable in the topical world of comedy."

Oliver made his first appearance on American television almost immediately after he arrived. "I remember my legs going a little bit wobbly, and then thinking, 'What the fuck are you doing? You're about to get found out in a big way.'" That has not happened yet. He has settled in the United States and married an American battlefield trauma surgeon.

"His power is in his ability to be playful, make the citizen feel smart, bring attention to things they perhaps haven't paid attention to before, and give them credit for doing it," says Young. "He's on to something, and people are going to want to get on that train. We're going to be surprised who shows up – I feel like he's going to become important."