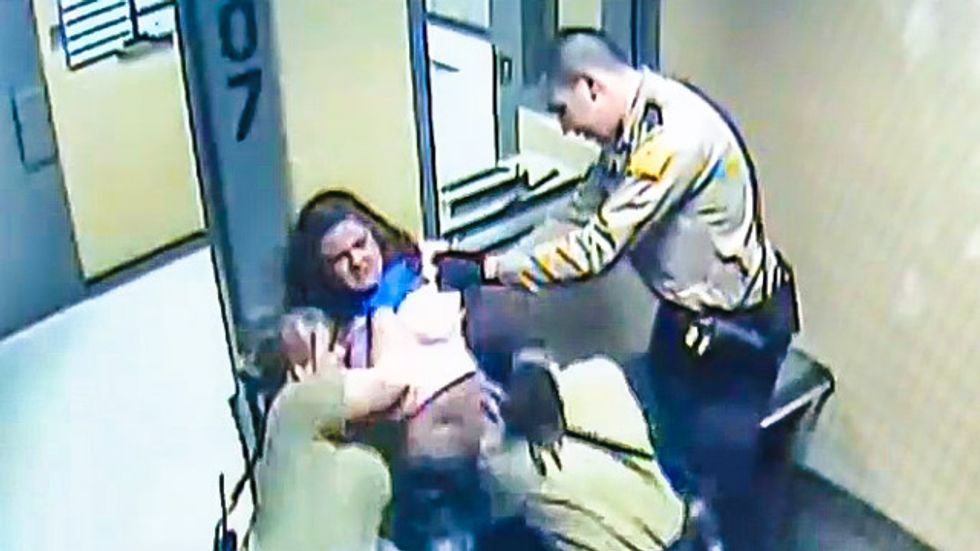 An Indiana sheriff has insisted that Floyd County Jail was following normal procedures when two male and two female officers stripped a woman, pepper-sprayed her, and then left her locked up without clothes for five hours.

The video shows Gentry in a jail cell with four officers, and two of them are male. After Gentry tries to stand up, the officers take her to what the jail called a "padded room."

"Almost immediately upon entering the jail, she's assaulted by four officers. They grab her around the neck, they grab her body," Landenwich explained. "They hold her down... There are two male officers and two female officers and they forceably remove her pants, her shoes, her underwear and her shirt and bra."

"Terrified and humiliated, she's banging on the door asking someone to give her her clothing and someone comes to the door and says, 'If you don't shut up, I'm going to pepper spray you,' and sure enough, they open the door, spray pepper spray into the room and they leave -- and they leave her in there for 40 minutes, naked, in a cell filled with pepper spray."

Eventually, Gentry was given a small blanket, and taken to wash out her eyes.

"She has a blanket draped over her shoulders, she's paraded through the booking area in full view of anyone who happened to be there," Landenwich pointed out.

Gentry is then made to stay in the cell naked for another five hours.

"Now this is a woman, who under our system of law, is innocent until proven guilty," Landenwich said. "She's charged and she's charged with a misdemeanor crime that's not a violent crime."

The attorney noted that the video also showed similar treatment of a second inmate.

Floyd County Sheriff Darrell Mills told WDRB that officers "don't strip search" at the jail, but they did follow policy by removing the woman's clothes.

A written jail report obtained by The Courier-Journal said that the woman had been warned that "since she had resisted, threatened and attempted to kick an officer she was being placed in a smock and the females (officers) were going to remove her clothes."

Sgt. Ryan Rainey wrote that he was forced to douse the woman with a "short burst" of pepper spray to "gain her compliance for the safety of this facility."

Another officer said that her clothes had been removed "per jail policy."

Landenwich told The Courier-Journal that she would file a federal lawsuit in U.S. District Court in New Albany against Floyd County Sheriff Darrell Mills and other officials next week. Landenwich recently settled a similar suit with the county over a case with Gentry's cousin, Ashley Storms, who alleged that she was also mistreated after a misdemeanor arrest last year.

Watch the video below from WHAS, broadcast June 9, 2014