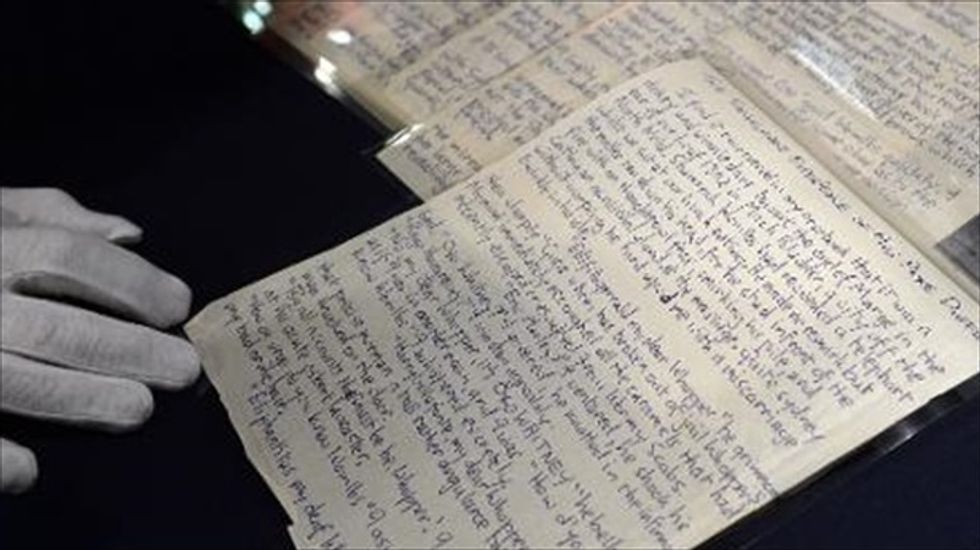 'The Singularge Experience of Miss Anne Duffield,' an original manuscript by John Lennon, estimated at 70,000 USD, on display at Sotheby's in New York City, on May 29, 2014

Drawings and writings by famed Beatle John Lennon flew off a New York auction block Wednesday, with some fetching four to five times their estimated worth.

Sotheby's -- which held the sale -- had described the often very simple ink sketches and pieces of prose as "the most extensive collection of John Lennon's original artwork, autograph manuscripts and corrected typescripts ever to come to auction."

And that appeared to motivate buyers, who snapped up the 89 lots on offer in just two hours.

Estimated to be worth $850,000 to $1.2 million, the pieces ended up pulling in $2.9 million -- including 25 percent in buyer fees, an amount not included in value projections.

That put a smile on auctioneer Benjamin Doller's face as he brought down the hammer after the sale of the last piece.

The items comprise the original material that appeared in two books by Lennon -- In His Own Write, published five decades ago this year, and A Spaniard in the Works, which hit the best-seller lists in 1965.

At times handwritten, at times typed up, they came from the private collection of London publisher Tom Maschler, creator of the Booker Prize.

Before becoming a musician, Lennon was known for his love of drawing. Already as a Liverpool schoolboy, he stood out not for being a stellar student but for the funny comics he created.

The most expensive piece to be auctioned off -- a nine-page, handwritten manuscript titled "The Singular Experience of Miss Anne Duffield" with an estimated worth of $50,000 to $70,000 -- went for $209,000, fees included.

Lennon, a founding member of the Beatles, was murdered in New York in December 1980 at the age of 40, three weeks after the release of his last album Double Fantasy, a collaboration with his wife Yoko Ono.