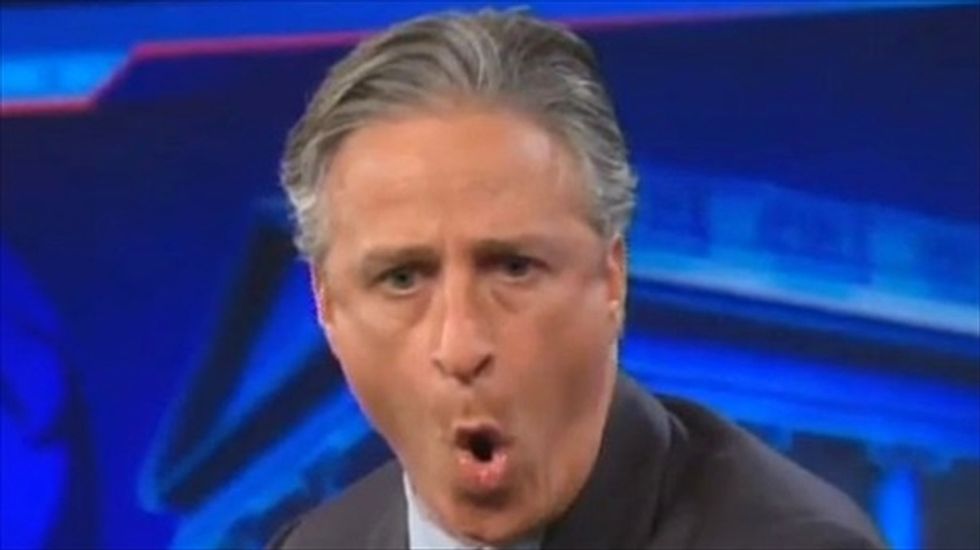 "You do know, not all Muslims have beards," Stewart said. "And not all people with beards are Muslims. There's a reason we call [it] the Abraham Lincoln Memorial, and not the Holy Shrine of the Blessed Imam Ibrahim Lincoln."

Besides using "impenetrable" logic to point to the elder Bergdahl's beard to paint him as a radical Islamist, Stewart observed, Fox News had seized on his use of the phrase, "Bismillah al-Rahman al-Rahim."

Conservative activist Brigitte Sanchez claimed it was a Taliban declaration of victory, while Sean Hannity grimly said on his show that President Barack Obama was "smiling" while Bergdahl made the remark.

"Yes, Sean Hannity, that's the president of the United States smiling as his comrade delivers the Muslim war conquer call in the Rose Garden, thus handing control of the United States of America to radical Islam," Stewart said sarcastically. "Is that what you were trying to say? I just want to make sure I'm receiving the full subtext of your boobery."

In reality, the phrase is a prayer, which translates to "In the name of God, the most gracious, the most merciful" in English. Not only that, but Stewart played footage of the phrase being used by several Middle Eastern guests of George W. Bush's administration.

Stewart also pushed back on Fox & Friends host Steve Doocy's statement that Bob Bergdahl telling his son, "use your conscience" in regard to his feelings regarding to war sounded like a blanket endorsement to "do whatever you want to do."

"It sounds that way to some," Stewart agreed. "Specifically, people who don't know what a conscience is."

Stewart explained to Doocy that a person's conscience acts as a counterweight to their desire to "do whatever [they] want to do."

"You understand what I'm saying?" Stewart asked. "Your id is the thing that enables your darkest impulses. Your id -- think of it as like the Fox News of your brain."