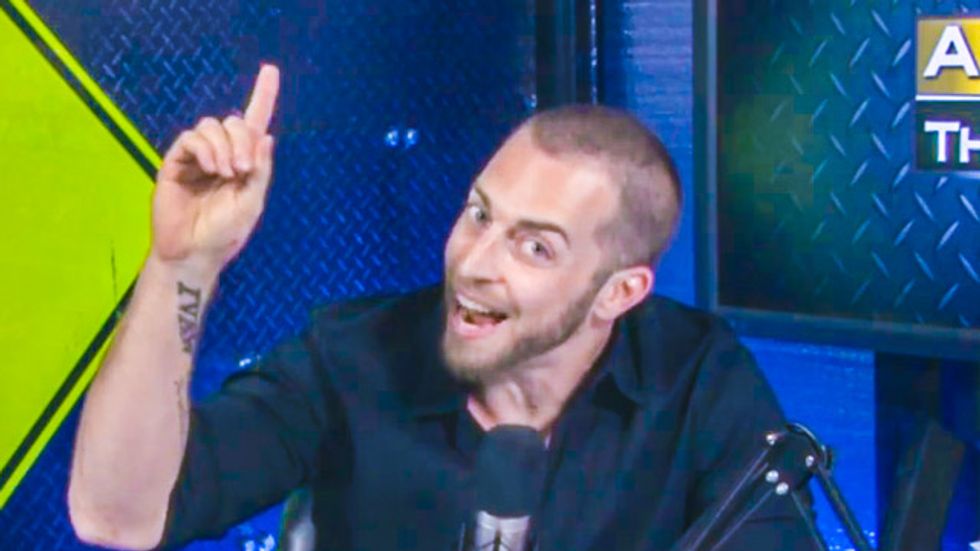 A libertarian gun activist -- who was convicted on weapons charges after he carried a loaded shotgun in downtown Washington, D.C. -- this week defended two people who recently went on a shooting rampage in Las Vegas, killing two police officers and another person.

On his Wednesday Internet show, Adam Kokesh blasted the Southern Poverty Law Center (SPLC) for noting that Jerad and Amanda Miller had been inspired by his gun activism.

"You're not going to get away with it this time USA Today and SPLC," Kokesh insisted, arguing that the shooters had acted because "authority has become a homicidal institution against freedom."

Kokesh asserted that the slaying of the two officers was not "murder" because police are likely to kill people.

"Let's say someone is going around stabbing people, like just stabbing people," he opined. "It's not murder to kill someone in that situation. And has been pointed out about the Vegas shooting, when you have police officers that are going around and doing violent things all day long, and then they take a break for lunch, well, it doesn't mean all of the sudden they're innocent or they're being peaceful because they're taking a break from all of their other anti-freedom, rights-violating violence."

"Think of how many lives might have been saved by this incident. How many people would these cops have killed had they not been killed?" he asked. "We can only hope that some of the officers in America are listening -- if you care about your own safety -- to understand that you are hurting people, and you can only push them so far before they hit a breaking point."

Kokesh argued that blaming Jerad and Amanda Miller was "kind of like blaming the victim," adding that they could have been thinking about the time his home was raided after he posted the video of himself loading a shotgun in downtown D.C.

After a 15 minute rant about the SPLC, Kokesh concluded that the civil rights group may have confused his time as a "violent psychopath" working for the U.S. Marines with his current anti-government beliefs.

"And they want to say that I'm the guy that has some responsibility for this, that they need to associate me with the Millers. And there is an association, there is. Yeah. There is certainly something to be learned from this connection," Kokesh said. "Violence begets violence. Turning to the institution of government to deal with these problems, an institution that is based on violence is guaranteed to make the problem worse."

In the end, Kokesh called the killing "not necessarily unjustified violence," even if it was "crazy and stupid."