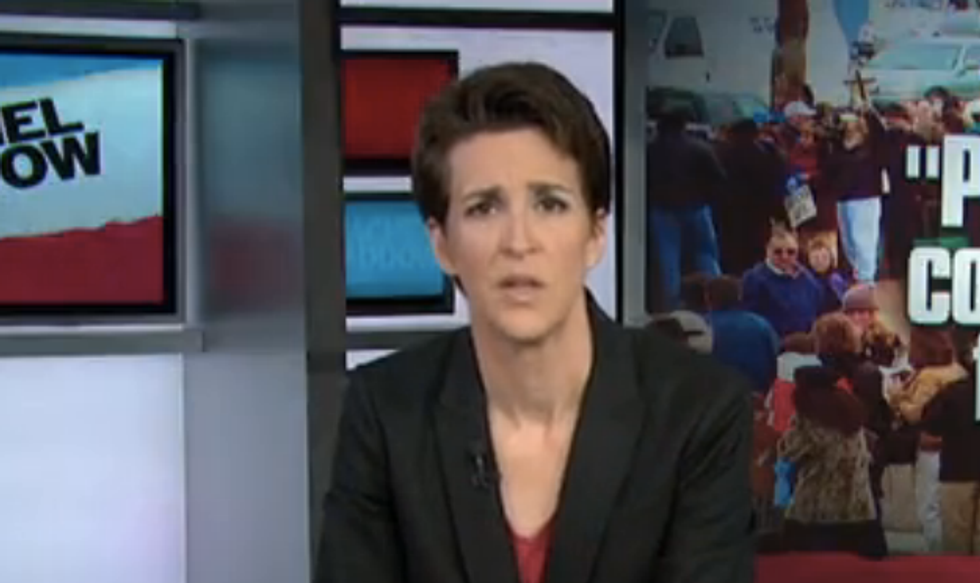 In the video embedded below, MSNBC's Rachel Maddow discussed Thursday's ruling by the U.S. Supreme Court regarding buffer zones for protesters around abortion clinics and other politically sensitive sites.

She began by detailing the relentless campaign of violence and intimidation by anti-choice activists in the U.S. over the last decades, including the assassinations of abortion doctors, clinic personnel and volunteers who were trying to safely escort patients and personnel into women's clinics.

"People who shoot doctors and bomb clinics," said Maddow, "they're not run-of-the-mill crazy killers and vandals of the kind who commit other sorts of crimes. They're part of a movement."

She segued to the Supreme Court ruling by pointing out that -- because court rulings can be politically-charged, emotional events -- there is a buffer zone, a "grand, marble plaza" that you must cross to approach the building.

"So the Supreme Court decided," Maddow said, "that that whole big expanse is a buffer zone. You cannot be there. You cannot walk across it if you need to get somewhere."

Protests or loitering of any kind are not permitted in the zone.

"It must be nice for the people who work there," said Maddow, because there are lots of protests at the Court, lots of highly charged emotions. Employees can get in and out each day without the hassle and stress of having to wade through a screaming crowd and without their safety being threatened.

"It must be a great relief to them to have that buffer zone outside that courtroom," she said. The Court has ruled that polling places on Election Day are off-limits to political protesters, as are the funerals of U.S. military personnel.

On Thursday, however, the Court ruled that women's clinics do not merit these same protections.

"From inside their own protective buffer zone, the Supreme Court issued its majority ruling striking down the one around abortion clinics," Maddow said.

Conservative Christian Chief Justice John Roberts wrote the majority decision in which he said that anti-choice protesters are "(p)etitioners who wish to converse with their fellow citizens about an important subject on the public streets and sidewalks."