Maddow to GOP blowhards who skipped the Bergdahl hearings : ‘We’re laughing at you’ 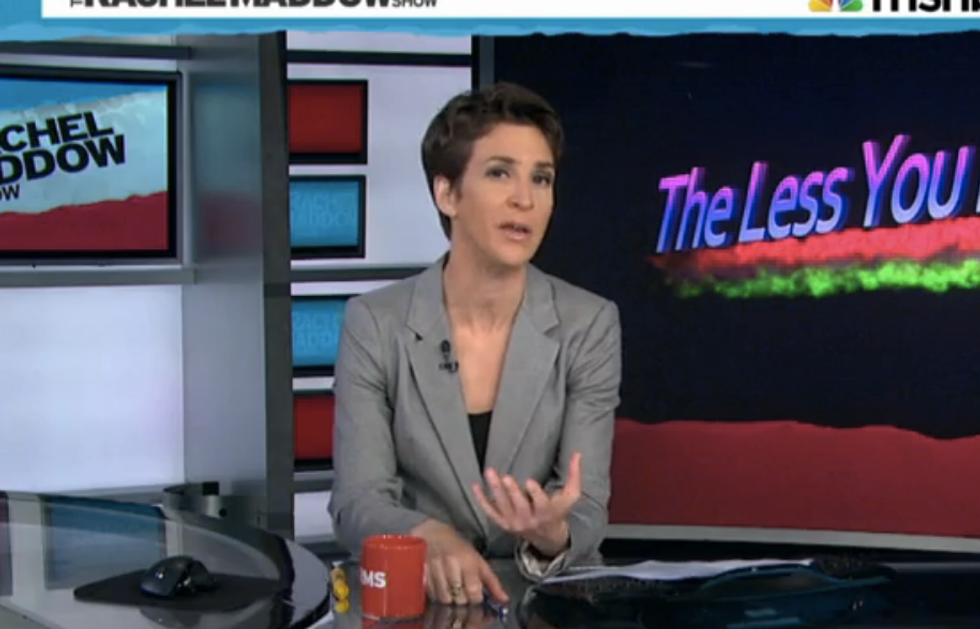 On Friday night, Rachel Maddow took Republican senators like Saxby Chambliss (GA) and John McCain (AZ) to task for skipping briefings about the release of Bowe Bergdahl and using that time instead to grandstand for TV cameras and play politics with the issue.

Maddow began with North Carolina Sen. Richard Burr (R), who ducked out of a hearing about trouble at the Veterans' Administration getting care to injured veterans who need treatment. Burr wrote a scathing letter on Memorial Day to U.S. veterans' organizations about their testimony before a Senate committee.

The trouble is, of course, that Burr wasn't actually at that committee meeting. Cameras show him leaving his chair early.

"He actually got up and walked out as soon as the veterans began their testimony," said Maddow. "And he only returned at the end of their testimony to say 'Thanks very much, you guys, but actually you've got to get out of here.'"

"It's not that I don't love you guys," said Burr when he rejoined the hearing, "but we're gonna try to get the next panel in before we get to serious votes that will bring a finality to this, so, thank you."

"I should note, though, that this particularly cowardly form of failure is not just a Richard Burr problem," she said, "although he does wear it well. This particular kind of failure happens a lot in Washington right now. This has become a very popular way to make a fool out of yourself as a politician."

When a CNN producer asked McCain why he was skipping the hearing about Benghazi, the erstwhile presidential candidate blew up, demanding, "Who the hell are you to tell me when I can or can not" hold a press conference?

"It is so much more fun to demand information than to actually receive it," she said. "Receiving it is boring and it takes forever and it's totally not like just going on Fox News and complaining."

However, said Maddow, "while he was doing that interview, the administration was conducting a classified briefing for all United States senators to explain those exact things."

"And you know," she said, "there's lots of briefings and hardly any of them are mandatory and you can go if you want to or not go if you want to. The problem is when you don't go or you leave early and then you're outraged that you didn't hear enough. Like Saxby Chambliss and again, John McCain."

McCain left the Senate briefing on Bergdahl early to go hold a press conference demanding, of course, more information about the prisoner swap.

"I learned nothing in this briefing," he complained to reporters.

"The one he left in the middle of," added Maddow.

"This is a new and increasingly common form of political lying in Washington," she said. "Getting away with this lie depends upon us being ignorant and easily led about what's actually going on in that big, boring, catty high school that is Congress. There is a reason to know what hearings are going on when and who's invited and who ought to be there."

"If you're skipping the briefing to complain that there's no briefing," she concluded, "We're not laughing with you, Congressmen, we're laughing at you."

World economy to slow, 'paying the price of war': OECD

The world economy will take a bigger hit than previously forecast next year due to the effects of Russia's war in Ukraine, the OECD said Monday.

In a bleak report titled "paying the price of war", the Paris-based organization noted that the conflict aggravated inflationary pressure when the cost of living was already rising quickly.