Mike Huckabee: Martin Luther King Jr. would agree that gay marriage is like the Holocaust 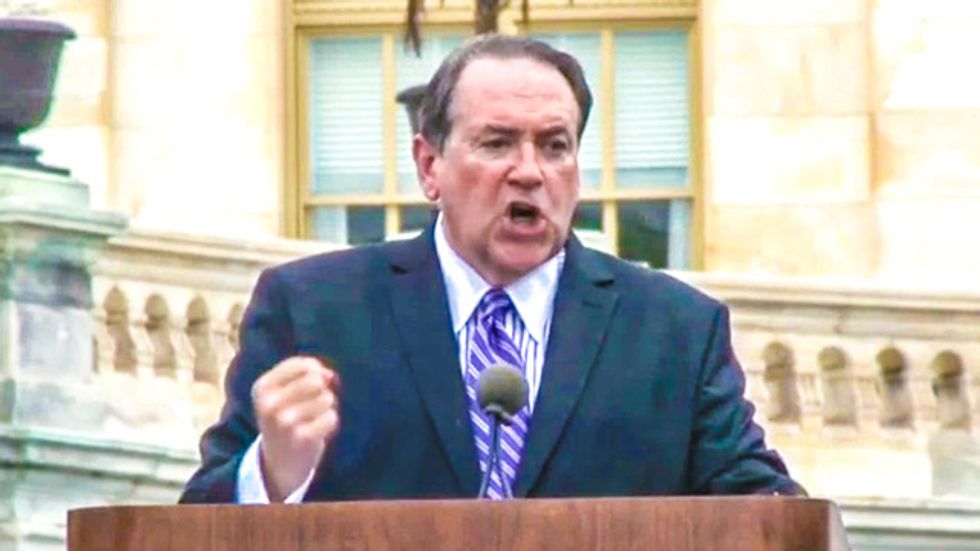 Speaking at the 2014 March for Marriage in Washington, D.C., Huckabee said that there was "no basis in the law" that gave a single judge the right to strike down same-sex marriage bans, like Sixth Judicial Circuit Judge Chris Piazza did in Arkansas in 2012.

"Nothing threatens your personal liberty more than the notion that you would bow your knee to the court system apart from the ultimate rule of the Constitution," he opined. "And all of the branches of government, all of which are not there to tell you what you cannot do, but to guarantee the freedoms that you are always empowered to have."

"We are under an obligation to obey God and the law, and if necessary, to defy an institution that is out of control," the former Arkansas governor continued.

To make his point, Huckabee quoted from a letter that Martin Luther King's Jr. wrote while spending eight days in the Birmingham Jail for fighting to end segregation.

"One may well ask, 'How can you advocate breaking some laws and obeying others?'" King had written. "The answer is found in the fact that there are two types of laws: there are just laws, and there are unjust laws. I would agree with St. Augustine that 'An unjust law is no law at all.'"

Huckabee continued reading from King's letter: "We can never forget that everything Hitler did in Germany was "legal" and everything the Hungarian freedom fighters did in Hungary was 'illegal.' It was 'illegal' to aid and comfort a Jew in Hitler's Germany. But I am sure that if I had lived in Germany during that time, I would have aided and comforted my Jewish brothers even though it was illegal."

"I wish I had penned those words," Huckabee exclaimed. "But they were penned by someone who understood freedom, and understood that there was a time to stand up against law when it has become unjust. Those are the words that were penned in 1954 by Martin Luther King Jr. in his letter from the Birmingham Jail."

In fact, Coretta Scott King, the widow of Dr. King, has repeatedly suggested that her husband would have backed equal rights for LGBT people.

"Freedom from discrimination based on sexual orientation is surely a fundamental human right in any great democracy, as much as freedom from racial, religious, gender, or ethnic discrimination," she told the National Gay and Lesbian Task Force in 2000.

Watch the video below from the National Organization for Marriage, broadcast June 19, 2014.