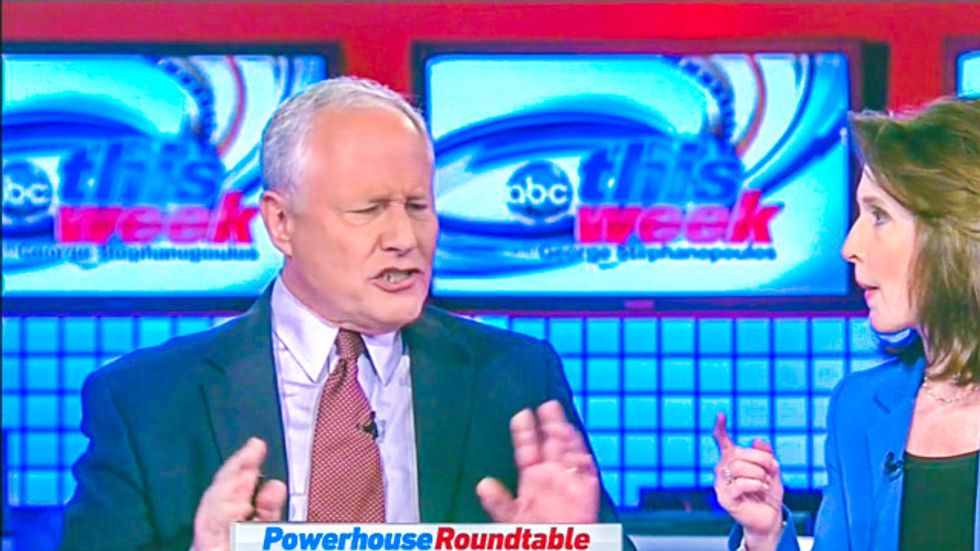 The Nation's Katrina Vanden Heuvel on Sunday challenged neoconservative Weekly Standard Editor Bill Kristol to join the Iraqi Army if he felt so strongly about the U.S. taking more military action in the country in response to recent violence.

During an ABC News panel discussion about House Speaker John Boehner's threat to sue President Barack Obama for executive overreach, Vanden Heuvel agreed that there were times that Congress should question the president's authority.

"For example, the president should go to Congress if he's going to take military action in Iraq," she explained. "There's no military solution to Iraq, and I have to say, sitting next to Bill Kristol, man -- I mean, the architects of catastrophe that have cost this country trillions of dollars, thousands of lives -- there should be accountability."

"If there are no regrets for the failed assumptions that have grievously wounded this nation -- I don't know what happened to our politics and media accountability, but we need it, Bill," she continued. "Because this country should not go back to war. We don't need armchair warriors, and if you feel so strongly, you should, with all due respect, enlist in the Iraqi Army."

"But it's real!" Vanden Heuvel insisted. "Millions of Iraqis have been displaced... What we have done to that country is a crime."

"What we have done to that country?" Kristol exclaimed. "President Bush made mistakes, he was punished for those mistakes electorally as he should have been in 2006, and perhaps in 2008. He also had the courage to order the surge in 2007, which made up for those mistakes, and left things peaceful."

"This president pulled out of Iraq in 2011, he let the Syrian civil war explode, and now we have a terrible situation," he opined.

After reminding Kristol that it was President Bush who had signed the status of forces agreement (SOFA) to withdraw from Iraq, Vanden Heuvel concluded by asserting that Iraq "needs diplomacy, it needs tough political resolution, and bringing the region together."