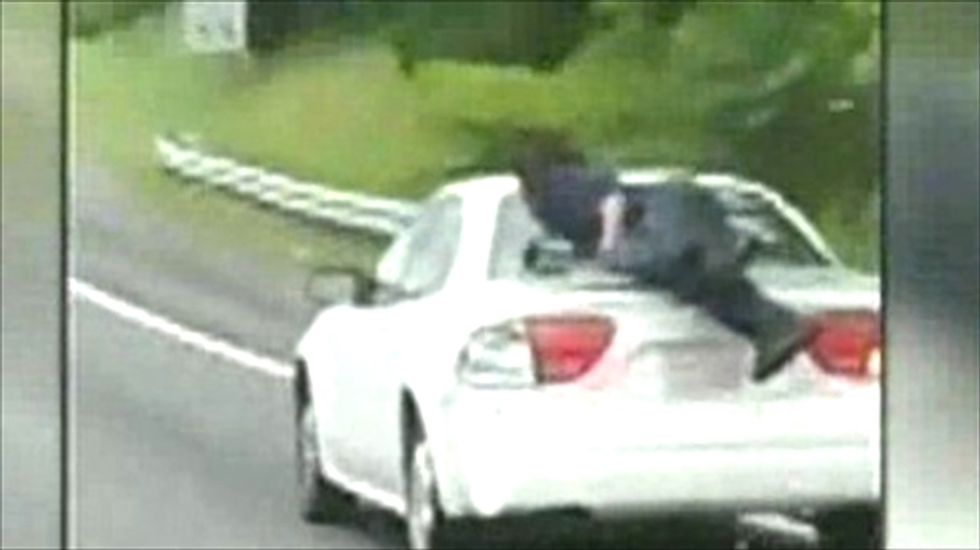 Police in Charlotte, North Carolina are looking for the unidentified man filmed hanging onto the back of a car reportedly going at least 50 mph on a busy interstate over the weekend, the Charlotte Observer reported.

Several motorists contacted authorities after spotting the man clinging to a white vehicle while driving on Interstate 77 on Saturday. Though footage of the incident has been posted online, the car's license plate number is not legible. Witnesses said there were a woman and a child inside the car while the man was hanging on.

One witness, Brenda Cruz, told WSOC-TV she gave authorities the car's plate number after capturing the incident on her phone.

"All of a sudden the kids say, 'There's someone on top of the car on the trunk,' and I'm like, 'what?'" she was quoted as saying.

The video shows the man hanging on the trunk and reaching inside through a crack in the windshield. Cruz said the man eventually got inside. Her son, Samuel, said he appeared to make his way in using "something sharp."

The vehicle pulled off of the highway before police could arrive. No injuries have been reported in connection with the incident, but authorities suspect that the driver and the man know one another.

Watch footage of the bizarre incident, as posted by WSOC, below.