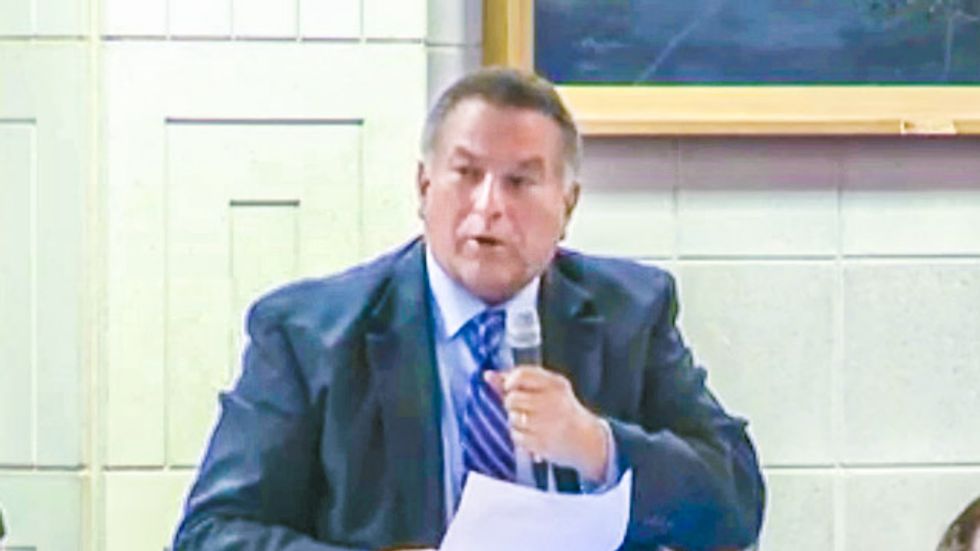 A Republican state representative in North Carolina distributed literature to a gay colleague on Tuesday that compared homosexuality to bestiality and pedophilia.

During a debate over a bill to expand charter schools in North Carolina, Democratic state Rep. Susan Fisher offered an amendment that would have prohibited schools from "discriminating on the basis of sexual orientation or gender identity."

Republican Speaker Pro Tem "Skip" Stam -- who is second in to command to House Speaker and GOP Senate candidate Thom Tillis -- immediately objected to the amendment.

"Sexual orientation is not defined anywhere. I have here 30 different types of sexual orientation here," Stam said, while handing the Sergeant at Arms a stack of papers to distribute to fellow lawmakers.

After all members who supported the amendment refused to yield to debate Stam, he continued, saying that "many, many sexual orientations are not ones you would want to teach kids in school."

In defense of the amendment, Democratic state Rep. Marcus Brandon -- who is North Carolina's only openly gay member of the Legislature, according to WRAL -- lashed out at Stam's handout.

"But the bigger issue here is in the state of North Carolina, we can continue to have policy that treat people like second-class citizens," Brandon said. "The LGBT community is part of that problem. You cannot go up into a charter school or a private school for that matter and say I'm not going to accept black children. That is illegal."

In the end, the Republican-controlled House moved to table the amendment.

WRAL reported that the handout that Stam distributed was part of the 2000 American Psychiatric Association's Diagnostic and Statistical Manual of Mental Disorders, and it included pedophilia, bestiality, necrophilia and prostitution as "sexual orientations."

The APA, however, has since updated the manual to list those conditions as "disorders" instead of "orientations."

Speaker Tom Tillis, who is the Republican U.S. Senate nominee running against Democratic Sen. Kay Hagan, declined to vote on the amendment, prompting concern from activists.

"Sexual orientation and gender identity protections are widely supported by the mental health, business and education communities everywhere in the nation," Sgro noted. "If Skip Stam wants to talk values, he needs to check back in with people from Murphy to Manteo on their desire to protect our kids. This state was built on fair access to education, and Stam is standing squarely against that.

Without saying whether Tillis supported protecting LGBT students from discrimination, a spokesperson for his campaign called Stam's remarks "not helpful to the respectful approach we ought to be taking on a policy matter that will ultimately improve educational opportunities."

North Carolina law does not currently protect LGBT people from discrimination based on sexual orientation.

Watch the video below from the NC State House, broadcast June 24, 2014.