Push to save ceasefire as Kiev threatens to scrape truce 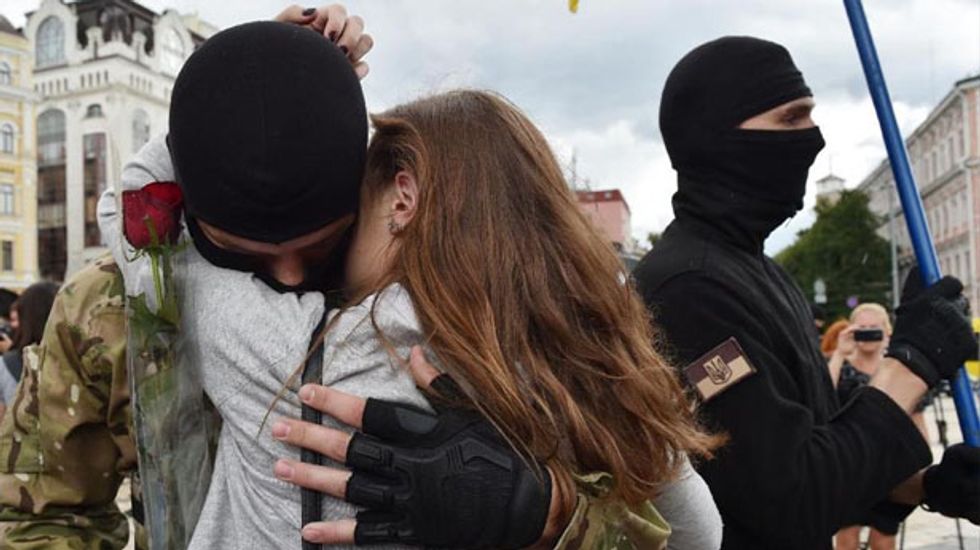 International efforts to save Ukraine's fragile ceasefire are set to intensify Wednesday as Kiev threatens to scrap the truce after pro-Russian rebels downed an army helicopter.

Nine servicemen were killed when the Mi-8 helicopter was brought down Tuesday, underscoring the limited control both Russia and senior rebel leaders seem to have over some militia units that are apparently operating according to their own rules in Ukraine's heavily Russified rustbelt.

It also threatens to quash budding hopes that Ukraine's Western-backed President Petro Poroshenko -- having ordered a one-week unilateral ceasefire on Friday that the rebels accepted on Monday -- will be able to negotiate an end to 11 weeks of violence that have claimed 435 lives, according to UN figures and an AFP count.

Poroshenko said he hoped to discuss the latest incident with Russian President Vladimir Putin in a teleconference Wednesday that would also be joined by German Chancellor Angela Merkel and French President Francois Hollande.

Meanwhile US Secretary of State John Kerry will attend NATO talks in Brussels which will be "very, very focused on the situation in Ukraine," a US official said.

The White House on Tuesday welcomed Putin's call to his lawmakers to revoke his authorisation to invade Ukraine.

The Kremlin chief's decision came with Russia facing the threat of devastating Western economic sanctions unless Putin took immediate steps to de-escalate the worst East-West crisis since the Cold War.

And as the diplomatic flurry continues, Kerry will hold his first bilateral meeting with new Ukrainian Foreign Minister Pavlo Klimkin.

Ukraine is asking for extra support from NATO to quell the separatists who have seized control of parts of eastern Ukraine.

The Donetsk region where the helicopter was hit and the neighbouring Lugansk province proclaimed independence in May in the wake of the February ouster in Kiev of a pro-Russian Ukraine president.

After the deadly attack on the helicopter Poroshenko announced he was ready to scrap the ceasefire and relaunch the eastern campaign with renewed force.

"The head of state does not exclude that the ceasefire regime may be revoked ahead of schedule in view of its constant violation by rebels who are controlled from abroad," his office said in a statement.

A Ukrainian military spokesman said the chopper was shot out of the sky by a portable air defence missile fired by a rebel unit outside their stronghold city of Slavyansk.

Both Kiev and Washington accuse Russia of covertly delivering weapons to the insurgents across the porous frontier about 160 kilometres (100 miles) to the east.

Slavyansk, an industrial city of 120,000, has seen some of the heaviest fighting in the insurgency and today resembles a ghost town.

Its central regions have remained without water and electricity since June 8. Cellular phone service has been sporadic for weeks.

A few people brave enough to venture out amid persistent echoes of artillery fire lined up with buckets outside water delivery trucks or waited for shipments of urgent humanitarian supplies.

The shops remained shuttered throughout the city centre and the only industrial facility still operating was the local bread factory -- supplied with both water and electricity by the separatists.

Putin has issued mixed signals to both Ukraine and the West for weeks -- a strategy he kept up on Tuesday.

He decided not to follow up his March annexation of Crimea by claiming control over the two territories in a land-grab that could have plunged Europe into all-out war.

The Russian leader followed his reversal on invading Ukraine with a promise delivered in Vienna Tuesday to "always protect ethnic Russians in Ukraine."

"I hope that armed forces will not be necessary for this," he remarked.

Some analysts believe that Putin is still smarting from the sudden loss of an ally in Kiev who could have brought Ukraine into a new alliance of post-Soviet nations being assembled by the Kremlin.

The subsequent flow of heavy weapons and gunmen across the porous border into eastern Ukraine seem to indicate that the Kremlin is -- at the very least -- turning a blind eye to local Russian officials and military commanders' efforts to support the insurgents.

And Putin's order on Saturday for Russian forces from the Volga to western Siberia to conduct snap military drills also suggests that he wants to keep Poroshenko's government unsettled in order to maintain influence in eastern Ukraine.

But the Kremlin chief seems equally determined to avoid steps that could trigger broader sanctions and deal a further blow to a Russian economy that is already teetering on the edge of a recession.