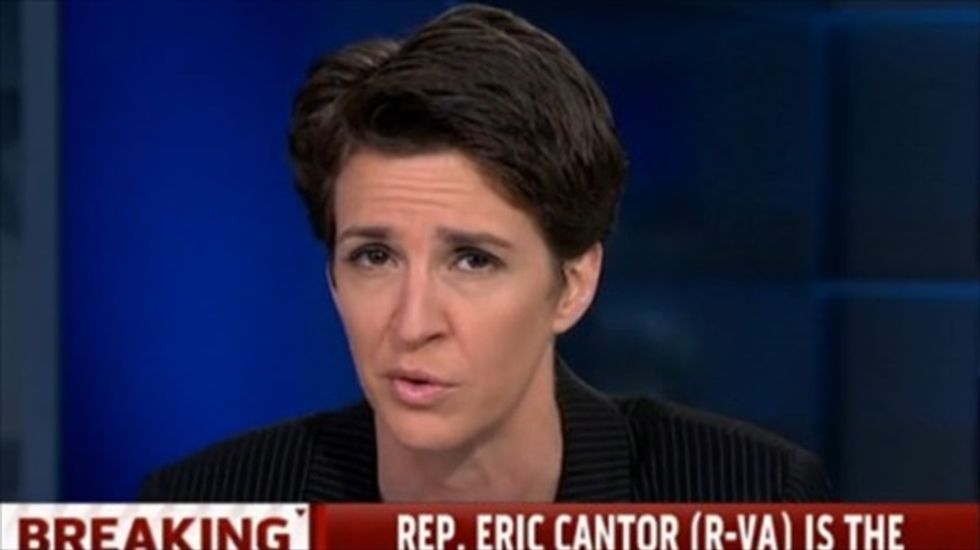 The political world is reeling that House Majority Leader Rep. Eric Cantor (R-VA) was unseated by Tea Party challenger David Brat. Part of the reason that Eric Cantor might have lost to a candidate no one has ever heard of, said Rachel Maddow on Tuesday night, is that his campaign ads were bland and awful, a sharp contrast to the anti-immigrant mailer he sent to Republican households.

"Political ads are forever," she said. Video is the closest thing we have to a real-time permanent record of the things politicians and candidates say and do and promise and allege.

David Brat attacked Cantor on immigration, accusing the 7-term House member of trying to grant citizenship to "illegal aliens." The Tea Party base in Virginia responded enthusiastically, in spite of Brat's lack of funding, shoestring campaign budget and failure to even put together a Facebook page.

When Brat gave an impromptu press conference denouncing Cantor from the steps of Cantor's own home district office, "Eric Cantor -- and I think this is important," said Maddow, "He responded to this primary challenge in a two-track way."

The first way was with his own ads, but, because he represented the establishment GOP, "He got very risk-averse in those ads."

Maddow called the resulting campaign spots "the most milquetoast thing you've ever seen in your life." She compared Cantor's bland, pro-business ads to "pleated chinos. You've seen it and it just disappears immediately. 'I want good things, not bad things. Join me!'"

"He didn't put it up in a video where it might end up on the 'Inter-tubes' and on TV, where, I dunno, Latinos or somebody might see it if they were noodling around, wondering about the views of the Republican Party leadership on immigration reform," Maddow explained.

"This seems like the end of the road for him," she said of Cantor.

"Watching how Eric Cantor was trying to publicly campaign one way and sort of secretly campaign another," said Maddow, "should be just its own thing," an isolated misstep by a powerful, if short-sighted congressman and not a hard shift to the anti-immigrant right by the GOP.

"This political shocker in Virginia tonight," she said, "legitimately is shocking. And nobody quite knows what it's going to do to national politics, Republican or otherwise."