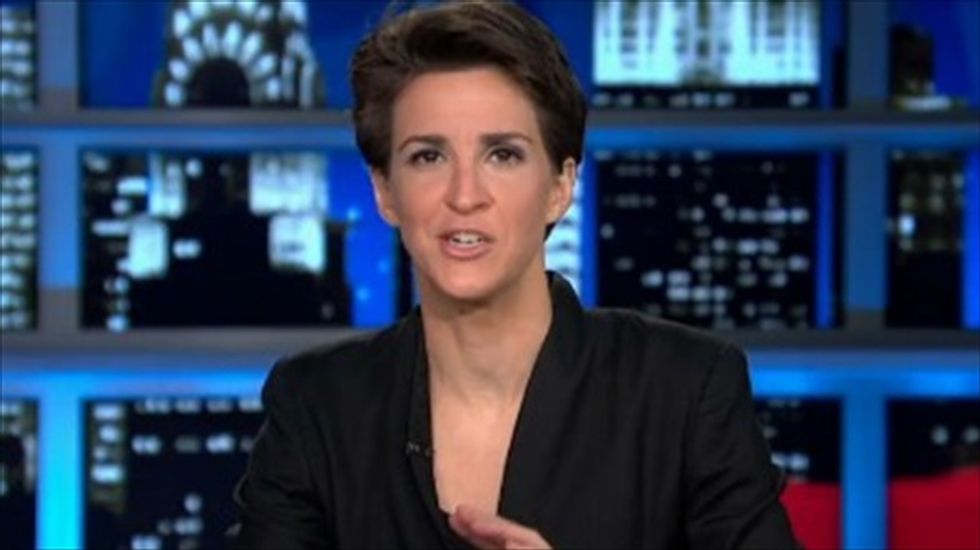 On Monday night, Rachel Maddow devoted her opening segment to studying the "long online trail" of clues left behind by Jerad and Amanda Miller, the couple who reportedly shot two police officers and a bystander before killing themselves in Las Vegas on Sunday.

Maddow began by discussing an NRA-backed Indiana law that allows citizens to open fire on police officers if they believe those officers are acting unlawfully.

"It is a remarkable law," she said, "even for this current iteration of the NRA and even for Indiana."

That law didn't get much attention in the nation at large, she said, but in "non-mainstream circles," it got a huge amount of attention and inspired "lots of armed resistance fantasists against armed tyranny kind of stuff, particularly on YouTube."

Maddow then rolled clips from a pair of YouTube videos about U.S. citizens taking up arms against the government and noted that both of the videos were "liked" by Amanda Miller.

The slayings, while ghastly, Maddow said, are not far beyond the pale of what is to be expected from week to week in the U.S. today. What makes them remarkable, she explained, is the political nature of the crimes.

Las Vegas Assistant Sheriff McMahill, at a press conference about the shootings, explained that after the Millers killed the two police officers in a booth at a CiCi's Pizza, "the suspects pulled the officers out of the booth and on to the ground, where they placed a Gadsden flag, that is, a 'Don't Tread on Me' yellow flag on the body of Officer Beck, and they also drew a swastika on top of his body."

They pinned a note to the other officer that reportedly announced the beginning of an armed revolution against the police and the federal government, then went on to shoot a civilian inside a nearby Walmart, before killing themselves in a murder-suicide pact.

"I live in Indiana and recently a law was passed named the right to resist law." Jerad Miller wrote at InfoWars in May of 2012, "As i can make out from it, if a police officer kicks in my door and is not there legally, then I may shoot him."

In May, Miller, a convicted felon, posted on Facebook, "Need rifle, can anyone help?" Because of his criminal record, Miller was unable to legally obtain firearms.

His record also caused Miller to be turned away from the crowd of armed conservatives at the Nevada ranch of Cliven Bundy, the sovereign citizen who came to national attention when he staged an armed standoff with federal authorities over grazing rights.

Jerad Miller did spend time at the ranch before he was sent away, interviewing members of the Bundy family and other armed supporters of the scofflaw rancher.

"Does this online ideological trail of breadcrumbs from this couple that apparently committed these crimes yesterday and is now dead, does their online trail of breadcrumbs just happen to be the political detritus of a pair of run-of-the-mill criminals who would have done this, regardless?" Maddow asked.

"Or is a fantasist and weapons-focused strain of the far right of American politics right now making this sort of thing more likely," she continued, "making it more possible than it otherwise would be if no one was out there encouraging folks to believe that shooting police officers in a pizza shop and shooting up a Walmart might reasonably be the way to spark an anti-government revolution?"