Recap: 'Game of Thrones,' Season Four, Episode Eight: 'The Mountain and the Viper' 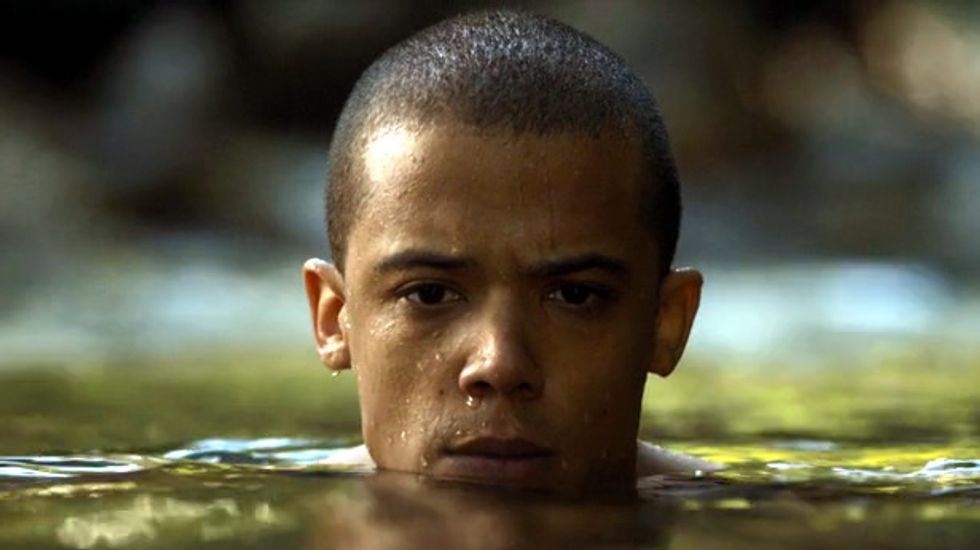 "The Mountain and the Viper" is bookended by two scenes as brutal as the players named in the title, beginning in Mole's Town, where the Wildlings' rampage toward the Wall continues.

It goes without saying that an episode won't end well for somebody when the first non-burped bit of dialogue is "The Rains of Castamere!"

The Mole's Town scene begins with what could be called the "common" brutality inflicted upon the women of Westeros -- those who don't marry must ply some trade, and the only one available to them that's the least bit profitable involves selling their body. The nameless, lame prostitute that director Alex Graves' camera tracks until she reaches Gilly is a brutal woman who meets a brutal end at Ygritte's brutal hand -- but the darkness relents, for a moment, when Jon Snow's spurned lover finds Gilly sheltered in a cupboard: 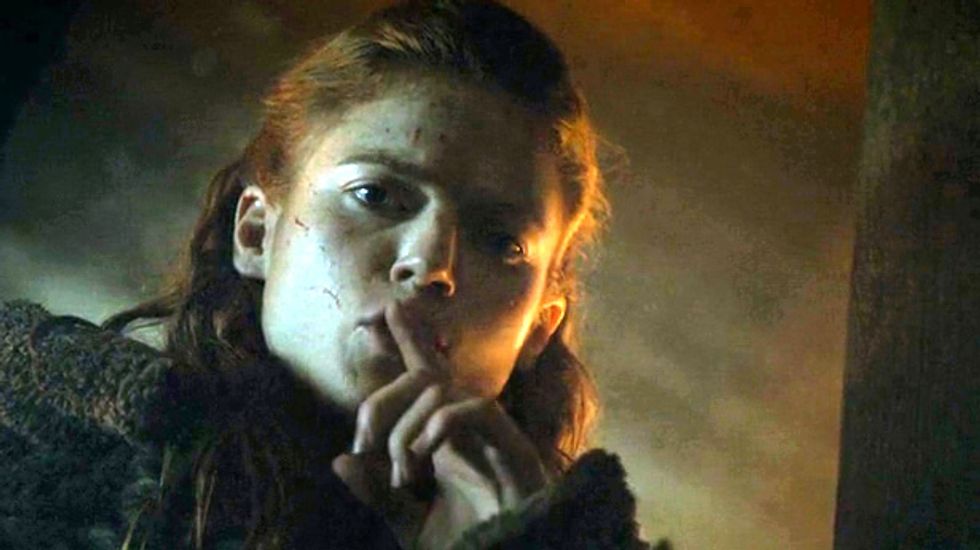 Instead of killing her and her inconveniently colicky child, Ygritte raises her fingers to her lips, as if to say, "If you're quiet, you'll survive this." (Would that other players in this episode have heeded her implied advice.)

The scene then shifts to the Wall itself, where news of the Wildlings' sacking of Mole's Town has spread and, well, for the most part everyone is rightly miserable. The only glimmer of hope is that his brothers of the Night's Watch are able to convince Sam that because Gilly has suffered and survived so many horrors in her life already, there's a chance she survived this one too -- which is, when you think about, the coldest of all possible comforts.

Being a "survivor" sounds wonderful in theory, but is nothing if not fraught in practice. Gilly, for one, will walk out of Mole's Town forever questioning why her life was spared. Was it just because of her child? And if so, does that mean she owes Craster -- the father who raped and impregnated her -- her life again?

The scene then shifts to Essos, where Grey Worm watches Missandei bathe with a curiosity that borders on being sullied. It's a surprisingly tender moment -- reminiscent of Macaulay Culkin spying on Anna Chlumsky in My Girl, which is odd, since Graves shoots it more like Martin Sheen arising in Apocalypse Now: 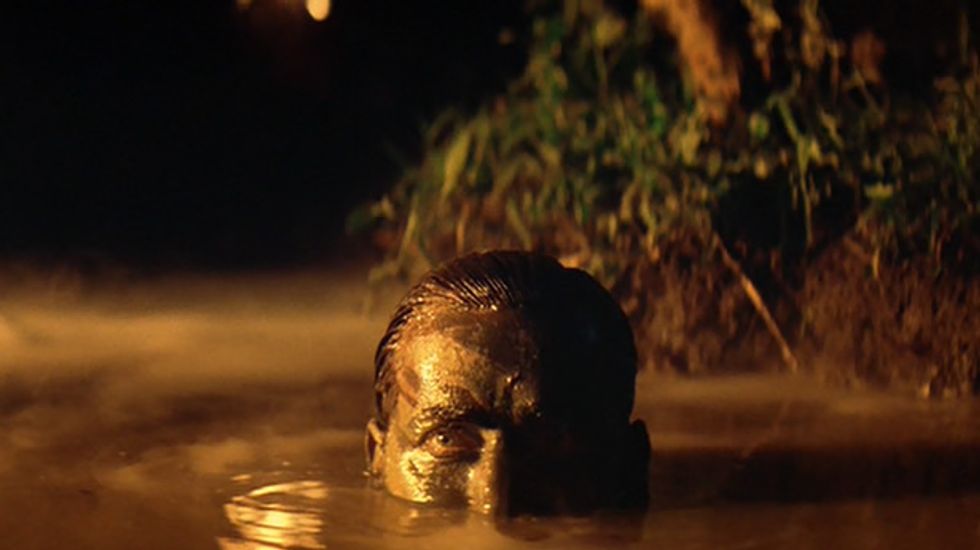 The visual echo here suggests that there's an inherent violence to spying: 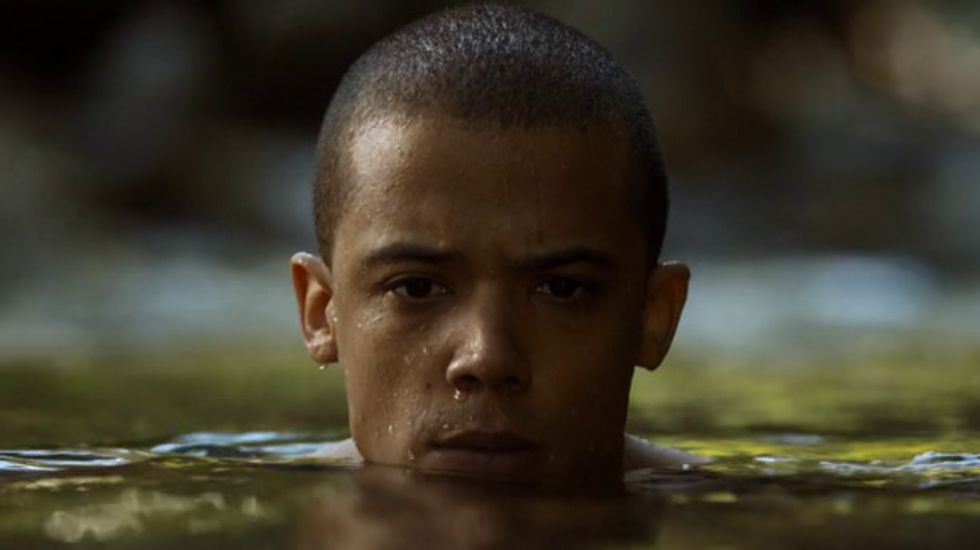 Especially when the person doing it is a trained soldier who has decided that certain wars are more just than others, and has been given the power to choose the battles he'll fight. Grey Worm may not be motivated by lust as he leers at Missandei's naked body, but that doesn't mean his intentions are pure, either. The subsequent scene -- in which Dany, Mother of Dragons, braids Missandei's hair -- makes plain that when it comes to the attentions of the Unsullied, neither their commanding queen nor her personal handmaiden entirely understand their motivations.

But, as Missandei's conversation with Grey Worm demonstrates, whatever his motivation, the attention is not unwanted: 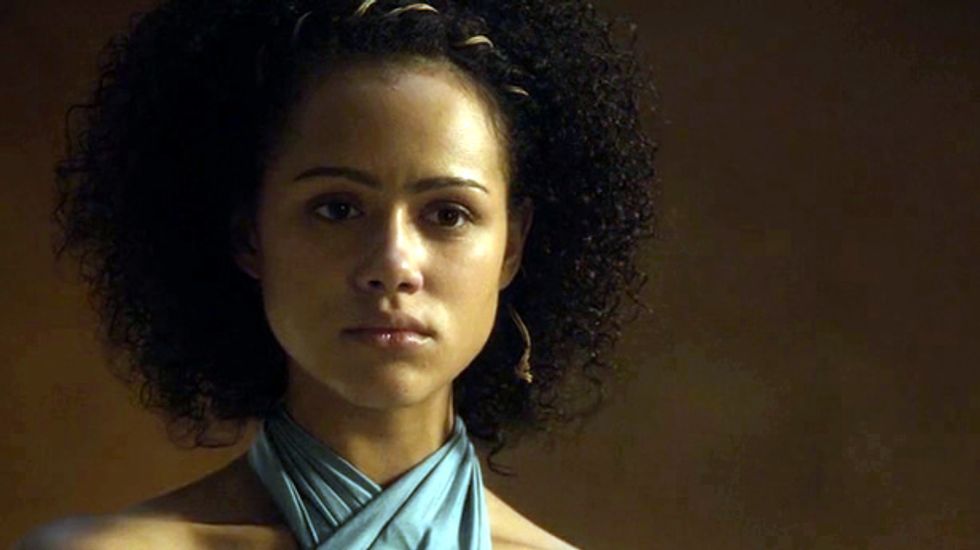 The off-centered framing indicates that she's not entirely comfortable with the knowledge she's acquired -- she accepts it, even welcomes it, but as her conversation with Dany made clear, she doesn't entirely understand it. Most women in Game of Thrones know where they stand with men, and are able to manipulate them with relative ease, e.g. Cersei Lannister with her many suitors.

A key aspect of this scene is that Graves lets the camera linger on both Missandei and Grey Worm for a few beats too long before reversing the shot, which creates an odd effect. Instead of seeing how the other character is reacting to what each of them says -- which is what typically happens with a reverse shot, as Person A says something and the camera cuts to Person B reacting to it -- Graves allows the audience to see both Missandei and Grey Worm reacting to what they've just said, which calls to mind the self-conscious awkwardness of a first date. They're both judging themselves before they give the other a chance to, and it's charming, because they're both far more forgiving of the other's missteps than they are of their own.

This awkward pacing bleeds over into the next scene, in which Reek née Theon Greyjoy must play the part of "Theon Greyjoy" in order to please the soon-to-be Ramsay Bolton née Snow. All of this name-changing -- remember, Missandrei asked Grey Worm about his "real" name again during their conversation -- is significant because it suggests that both the former Theon and the future Bolton are, for the moment, playing parts. That they both do so successfully -- and that the reward is another, off-screen, intimate bath shared by the pair -- would be significant even if it didn't lead into a more majestic performance from the once-and-future Sansa Stark.

She informs the council inquiring into the suicide of Lysa Arryn that she's not "Alayne Stone," who she had barely begun pretending to be, but Ned Stark's daughter -- and then portrays herself as the most wronged woman in Westeros, betrayed by everyone at every pass except for Petyr Baelish. It's a masterful performance, building as it does on the suggestion in "Mockingbird" that Sansa was paying attention to the behavior of her husband, Tyrion, and that of her current protector, whose ass she saves from certain skinning here.

For all the clarity that an episode whose title is larded with definitive articles -- "The Mountain and The Viper" -- possesses, it's worth remembering that that's not either of their names. There's no truth in names, only in actions, the scene with Sansa suggests, at least until the camera cuts to Essos and Jorah Mormont's treachery is revealed.

He is who he said he was, at least, just as Ramsay Snow is who is father makes him -- Ramsay Bolton.

If all this naming and re-naming business seems unnecessarily fraught with meaning, Graves cuts from it to one of the few real moments of joy depicted anywhere in the entire series: 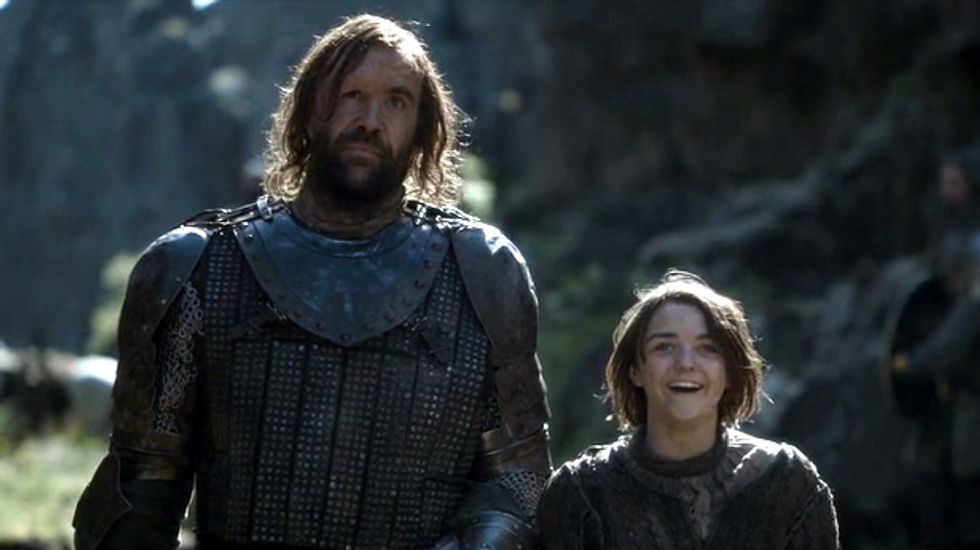 I can only speak for my own household here, but the eruption of laughter that accompanied Arya's seemed to be a release of unrelated tensions, less a product of the scene itself than the horrors already witnessed, as well as those yet to come, in the rest of episode. The same was true of Tyrion's prolonged recollection of his cousin, Smasher of Beetles, which seemed to relate both to some larger point about the futile actions of men in the face of an angry god's whims and the forthcoming fight between his champion, the Red Viper, and the Mountain.

About which I should say something...

...but I'm not entirely sure what to say yet. For the second time in the series, the most salient reference point was The Princess Bride. Only this time, the repeated phrase is "You raped my sister. You murdered her. You killed her children." Yes, I know this was in the books, but that doesn't change the fact that it delivers differently when spoken and shouted aloud.

It's a moving scene, watching the Oberyn Martell tell it to the Mountain, and even those who knew how this scene had to end were holding out hope that, this time, the inevitable wasn't: 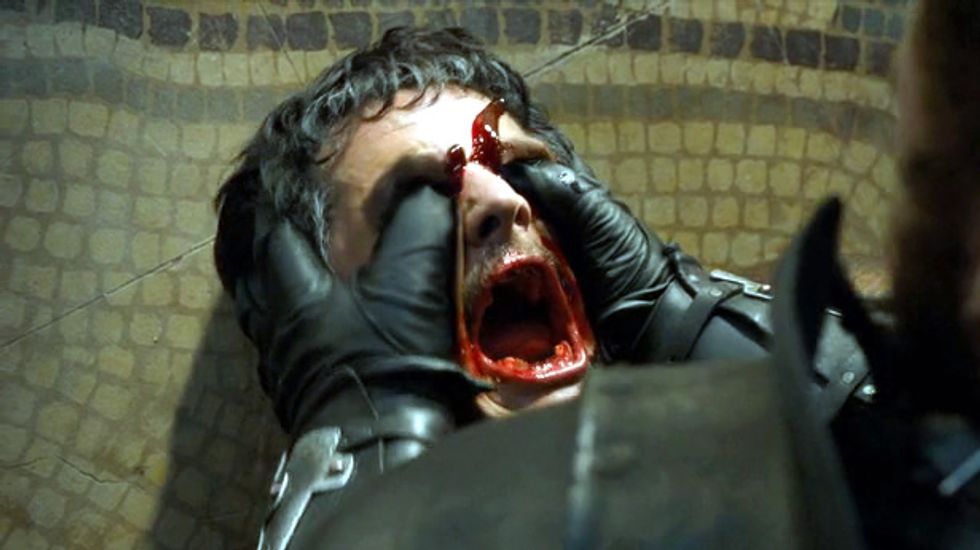 But this is Game of Thrones, so of course it was.