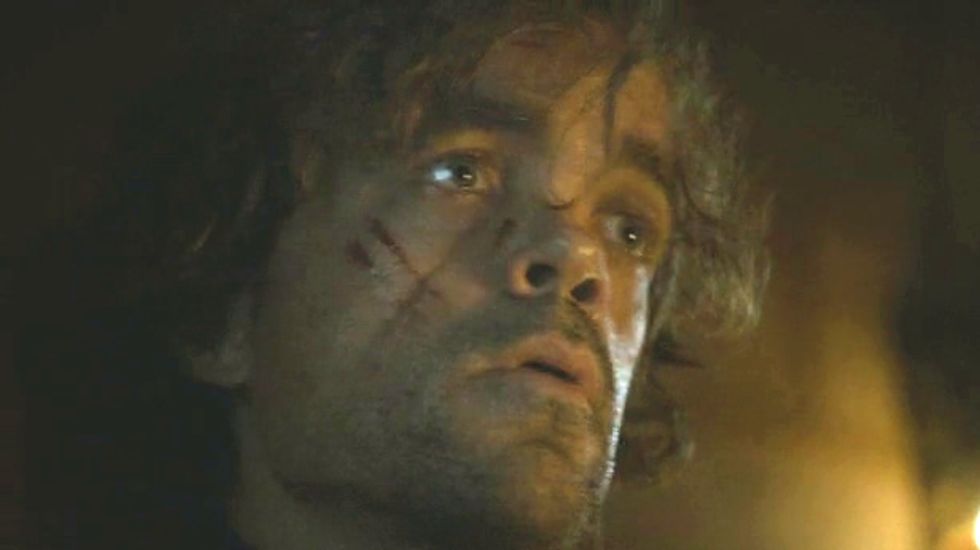 The season finale of Game of Thrones, "The Children," kicks off precisely where "The Watchers on the Wall" ended -- with Jon Snow venturing beyond the wall to parley with Mance Rayder. This scene has been a long time coming, and is arguably the most important in the series, as is made obvious by how it visually echoes the opening shots of the very first episode, starting with the long shot of a lone figure from the Wall-eye perspective... 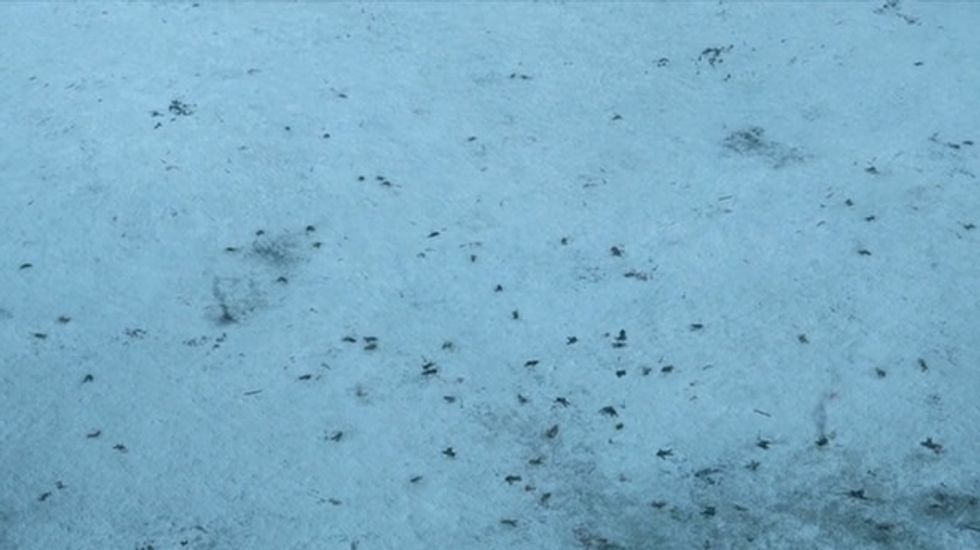 Followed by the following medium long shot of that figure entering the woods beyond the Wall... 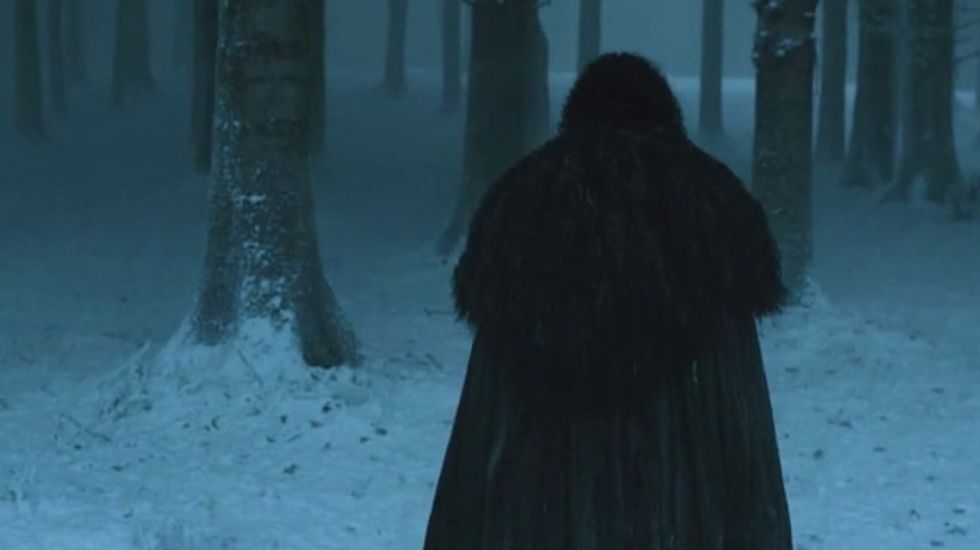 This parley is where the series has been headed since its opening scenes, and Snow's description of his conflicted orders, along with Rayder's acknowledgment that he's waging war on the Wall so that he might safely ensconce himself behind it, hark back to the first glimpse of a white walker we had, before the opening credits ever even rolled.

Stannis Baratheon finally arrives -- right on time, but in my opinion an episode late -- and informs the King Beyond the Wall that "it's customary to kneel when surrendering to a king." Even the threat of the indiscriminate slaughter of his subjects fails to move Rayder to his knees. "All the same, we do not kneel," he says, indicating what should have been the title of the episode.

Director Alex Graves then cuts to King's Landing, where it becomes apparent that a mountain, once fallen, can't be healed. "This man, he's not even a maester, let alone a grand maester," Pycelle complains, giving full form to the theme developed in the earlier exchange between Stannis and Rayder. At stake in this episode isn't who deserves to rule, but who can do so rightly -- titles matter less than what you can do, and only the oblivious believe otherwise.

Like, for example, Tywin Lannister, whose plans have all been shot to Hell, repeatedly, this season. He only seems to be in control because he excels at seeming like he's in control, but his daughter informs him just how fragile and illusory that control is. "How can someone so consumed with the idea of his family have any conception of what his family was actually doing?" Cersei asks her father. "We were right there in front of you and you didn't see us."

This isn't the last time one of his children will be right there in front of him doing something he'd rather not be done. But I digress -- let the incest begin! 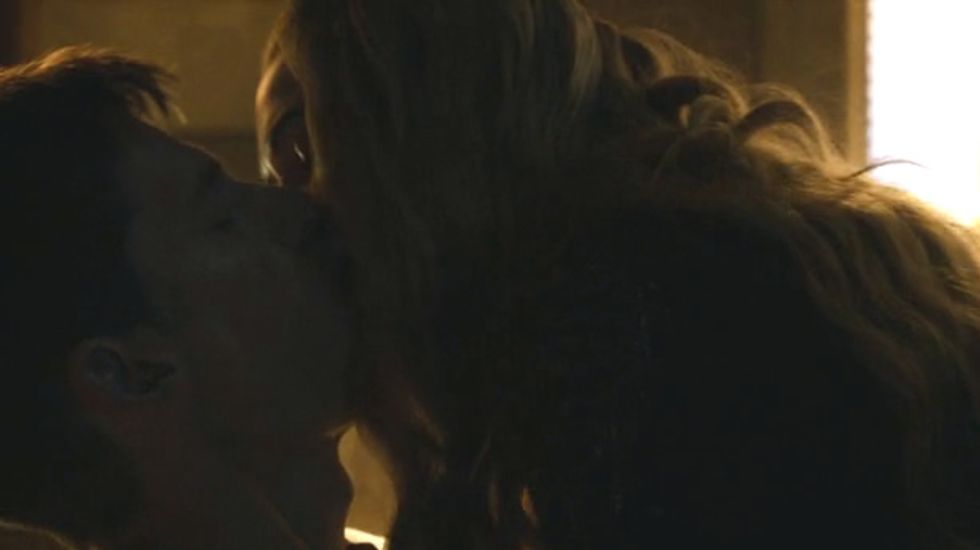 I admit to being slightly annoyed that HBO gifted the series an extra 14 minutes and it chose to waste three of them showing this illicit, yet thoroughly well-established affair on screen instead of, say, expanding the scene in Meereen in which Dany learns a valuable lesson about freeing enslaved peoples -- namely, that some of them would rather not be free if freedom entails allowing the young to prey upon the elderly.

Or, for that matter, dragons to prey upon children. The woman who had been the titular "Breaker of Chains" earlier this season is now in the enslavement business, as the moving scene in which she shackles her children makes plain. 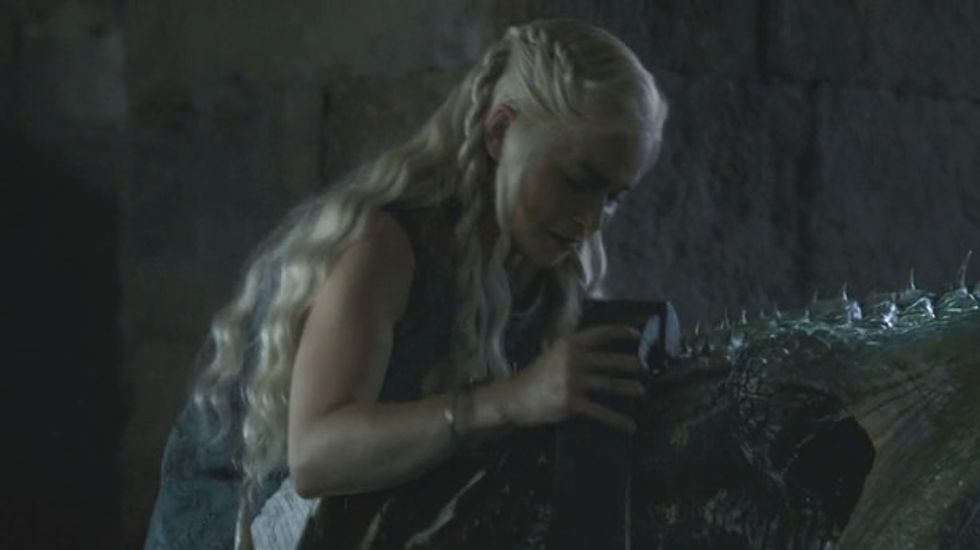 Jon Snow returns to the Wall to burn the bodies of his brother, as well as that of his lover, further hammering home the human consequences of these kingly games.

Then Hodor sees a tree... 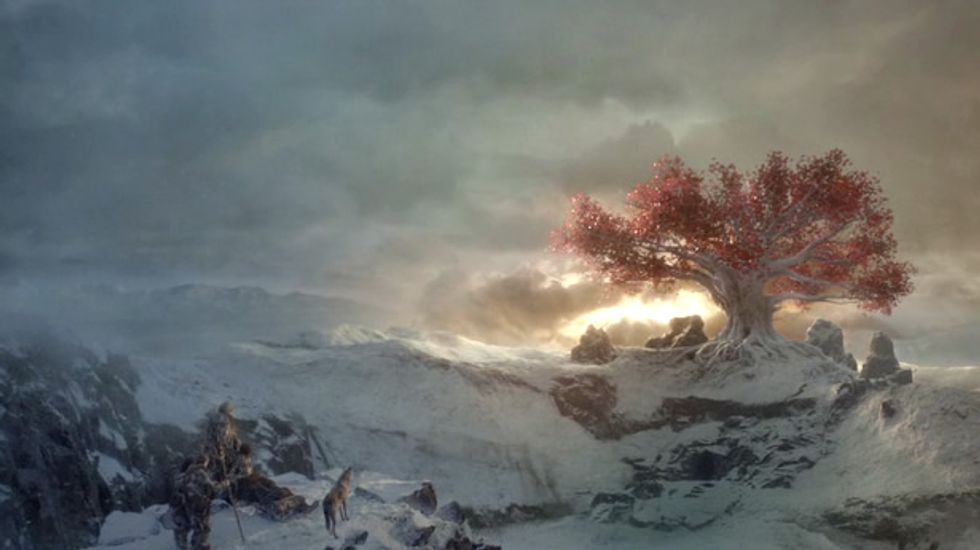 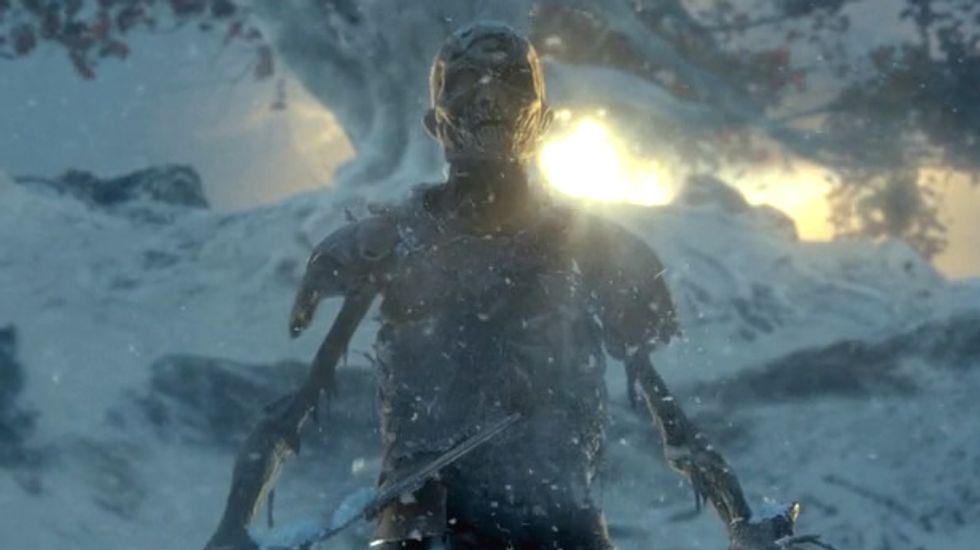 In the ensuing fight, Bran hijacks Hodor again, and Jojen Reed loses his life. Bran and company meet a Child of the Forest, who introduces them to a man who lives in a tree. Members of the audience who mistakenly valued the show for its realistic recapitulation of English royal politics either need a more expansive metaphor or to abandon ship, because the series is signalling that it's about to shift into a more fantastic mode of fantasy from here on out.

But it's not quite there yet, as evidenced by the overlong fight scene between Brienne and the Hound. Brienne tries to convince Arya that she was tasked by her mother to bring her home and protect her, but given that Arya knows how things ended for Catelyn Stark, she's unconvinced. The episode then wastes more of its precious reserve of minutes -- there are only fourteen left by the time Arya leaves the Hound to the die! -- on depicting Brienne battle the Hound before the scene shifts back to King's Landing for a jailbreak.

Jaime Lannister, having freed his brother from prison, then frees him again -- at the very least, instead of insisting Tyrion get on with the escape plan he's hatched, he allows him to finish his unfinished business. Tyrion may have been planning on taking Shae with him, but that plan's shot to Hell when she whispers his father's name... 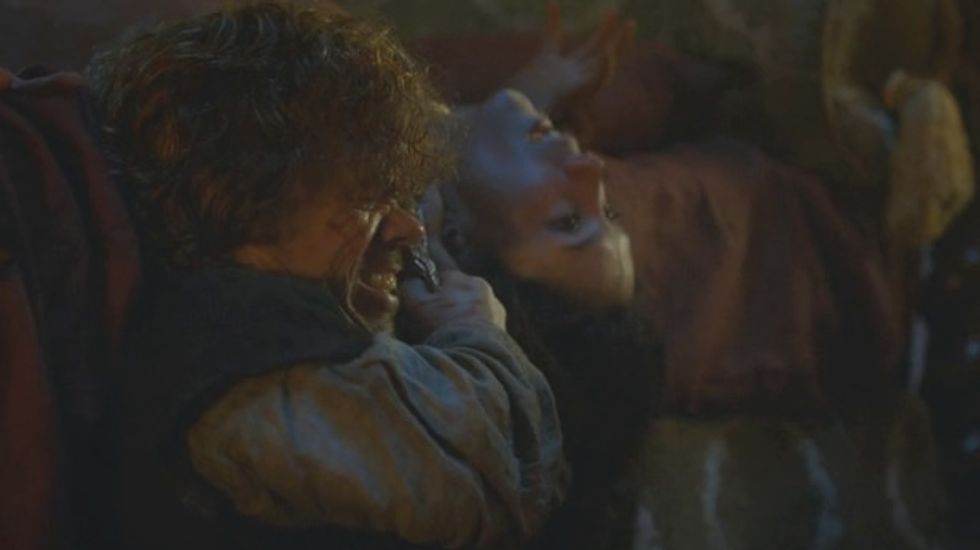 He had no choice but to play Princess Leia in Return of the Jedi and strangle Shae off. Then it's time to kill father -- who, sad to say, does not in fact shit gold -- before being placed in one of Varys' human-trafficking boxes and shipping out, or being shipped out, of King's Landing.

The fourth season ends with its two most compelling characters embarking on voyages, then, as Tyrion's off to anywhere that isn't King's Landing and Arya sets sail for Braavos. The title of the episode, "The Children," seems oddly to apply to the two of them, as they've both "come of age" as the episode closes, and they both are leaving the only -- albeit awful -- homes they've ever known. 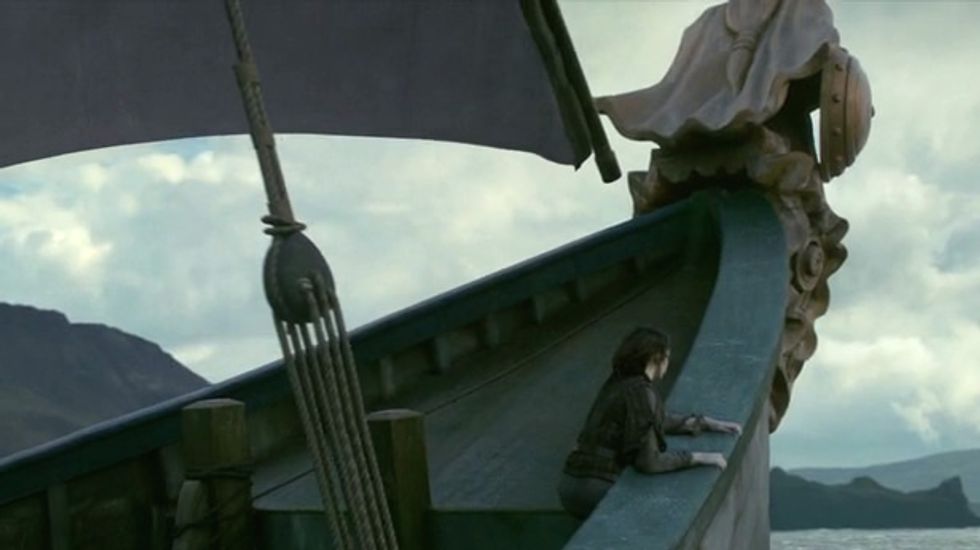 But if they are "The Children," the episode insists in those closing shots of Arya, they are so in stature alone.