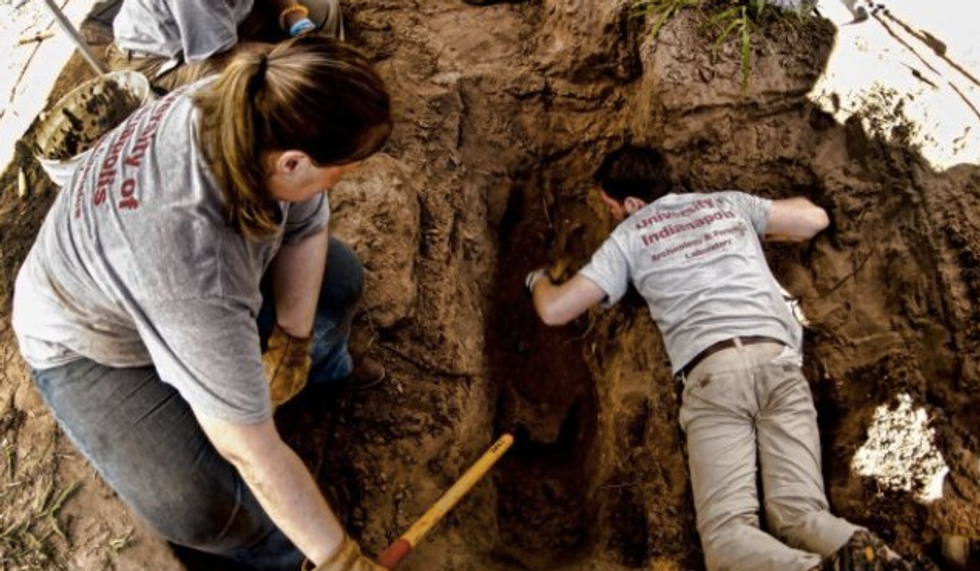 A team of volunteer researchers uncovered a mass grave in south Texas this week, where the bodies of Mexican migrants were discarded like trash as they died trying to enter the United States.

The Corpus Christie Caller-Times reported that the anthropologists working at the site found bodies in garbage bags, shopping bags, crammed into body bags with other cadavers and some with no containers at all.

“To me it’s just as shocking as the mass grave that you would picture in your head, and it’s just as disrespectful,” said University of Indianapolis forensic anthropologist Krista Latham to the Caller.

The bodies began piling up at Sacred Heart Burial Park in Brooks County, Texas about eight years ago. The forensic anthropoligists on the all-volunteer team have devoted years to identifying and providing proper burials to migrants who died of exposure trying to evade Border Patrol checkpoints and enter the country.

The south Texas borderlands regularly reach temperatures higher than 100 degrees during the summer. Hundreds of men, women and children have died in the last few years in Brooks County alone.

The research teams examined approximately 110 unidentified cadavers, beginning in 2013. The bodies were recovered from 52 excavations performed on the county-owned, public side of the cemetery. The actual number of bodies is unknown because so many of the excavation sites contained multiple, intermingled bodies. Further testing will be needed to separate out all of the remains.

County officials said that for the last 16 years or more, whenever they found bodies in the desert, they were handed over to local funeral home, Funeraria del Angel Howard-Williams. The county paid the funeral home a stipend of $450 each to dispose of the bodies.

Investigators found temporary grave markers and other items used by Howard-Williams in burials. A spokesperson for the company declined to comment, referring the Caller to Jessica McDunn, a spokesperson for the funeral home's parent company, Houston-based Service Corporation International.

“No matter if this is one of our client families we serve on a traditional basis or a migrant family’s loved one we’re serving and we don’t have any identification of the loved one, I do want to let you know it is our policy to treat the decedent with care, to treat them just like we would treat anyone else,” McDunn said in a statement.

Howard-Williams, said McDunn, has records pertaining to the burials, but "this does not amount to confirmation that Howard-Williams was involved in depositing the remains in the manner the researchers described.”

“The whole thing sounds really bizarre,” said Jon Stephenson of the Texas Cemeteries Association. “I can’t imagine why a professional funeral home or cemetery or anybody would take that attitude. It doesn’t make sense.”

Immigrant rights advocate Eddie Canales said, "I think it’s very hard for people to connect in the fact that these were human beings. It just goes to the language, to the words, and words mean a lot: ‘All these were illegals.’"

“Even in death," Canales said, "they wound up not getting the proper respect.”