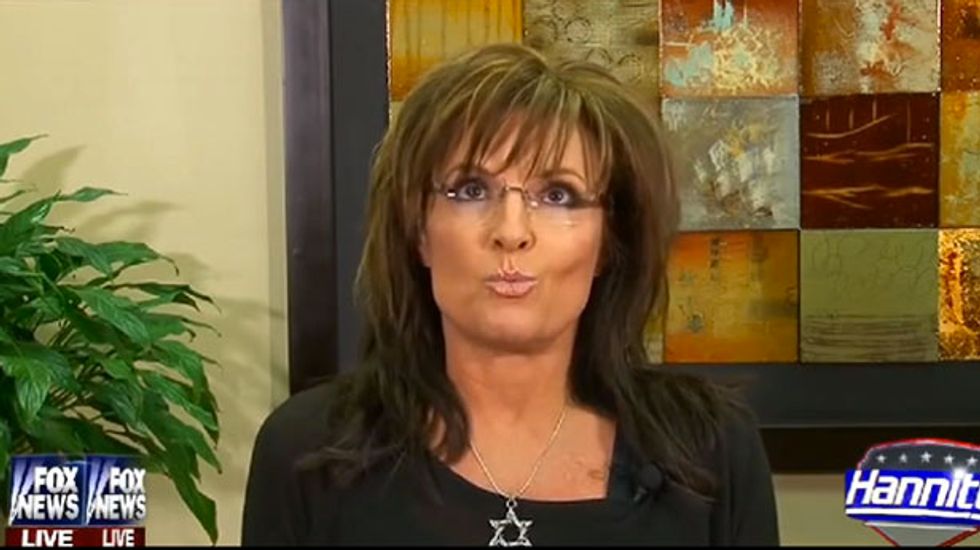 Former Alaska Governor Kelly Girl temp and, apparently, recently converted Jew, Sarah Palin left her Facebook Fortress of Derp last night to toss some word salad for Sean Hannity about what was going on in last night's election whosie-whatsis, while threatening to take the Tea Party to the Promised Land as a third party.

As you know, there were "shenanigans" afoot in Mississippi where the Negroes stole Chris McDaniel's date with destiny and now he may go third party --I hear Connecticut for Lieberman is available__ because, like the Confederacy, McDaniel is going to rise again.

Here, let Sarah Palin -- Curator of Elections, Stringer-Together of Random Terms -- explain to you that is very "rare" when a candidate, who promises to get constituents stuff from the government like infrastructure improvements and jobs, ever wins elections because.... freedom or something:

"Well you know as for the primary, and perhaps if it's true some shenanigans going on there, nothing should surprise you, but that's that old school politics where it's a bit of the status quo and that has got to go. It's very rare in a Republican primary that the candidate who promises to bring home the bacon, promising bigger government, which is requiring higher taxes, and more burdensome government, actually pulls it off in the primary. That's a rare thing. It'll be surprising .... and yet or perhaps not, to find out with that crossover of Democrat voters, how that does impact the general."

Also, too, here is Sarah's description of the only people [David Brat] who can save 'Murica from fellow Jews like Eric Cantor just like the way the Founders done blue-printed it up in consultation with Adam Smith:

"I think that it speaks for itself. That it is the constitutionalists, those who understand in the end that the Constitution is the blueprint towards a more perfect union and if politicians would follow it our country would be better off. And included in that, kinda that principle of following the Constitution, adopting the free market, adopting any policy that would allow thriving of the American people. The entrepreneurial spirit to once again grow."

..... and here is Sarah trying to wrap up her line of reasoning after she realizes that her train of thought has entered full-speed into yet another cul-de-sac.

"....it's refreshing to see new energy get in there, and not necessarily new ideas, because these are time tested truths that work for an economy and for security of a nation. And I think that..uh..you know we saw results that reflect that."

Lastly, ham-headed Sean Hannity asks her if she is going to make good on her threat to go third party with the Tea Party which is apparently a wholly owned subsidiary of Granny Grifter Bump-It Wholesaling Enterprises , LLC:

"Well if Republicans are going to act like Democrats, then what's the use in getting all gung-ho about getting more Republicans in there? We need people who understand the beauty of.... the value of ... allowing  free market to thrive. Otherwise our country is going to be continued to be over-regulated, driving industry away, driving jobs away. We're going to be a bankrupt, fundamentally transformed country unless those who know what they're doing, and aren't going along just to get along with those in power, it being today the Democrats. That does no good. So yeah if Republicans aren't going to stand strong on the planks in our platform then it does no good to get all enthused about them anymore."

I, for one, encourage Sarah Palin to form a more Perfect Union of  Free Market Constitutionalists for Freedom and Ronald Reagan and Entrepreneurship For All Party, drawing off disaffected conservatives and rending the Republican Party asunder.

This can only be good for America.

Just not in the way Sarah Palin thinks it will...