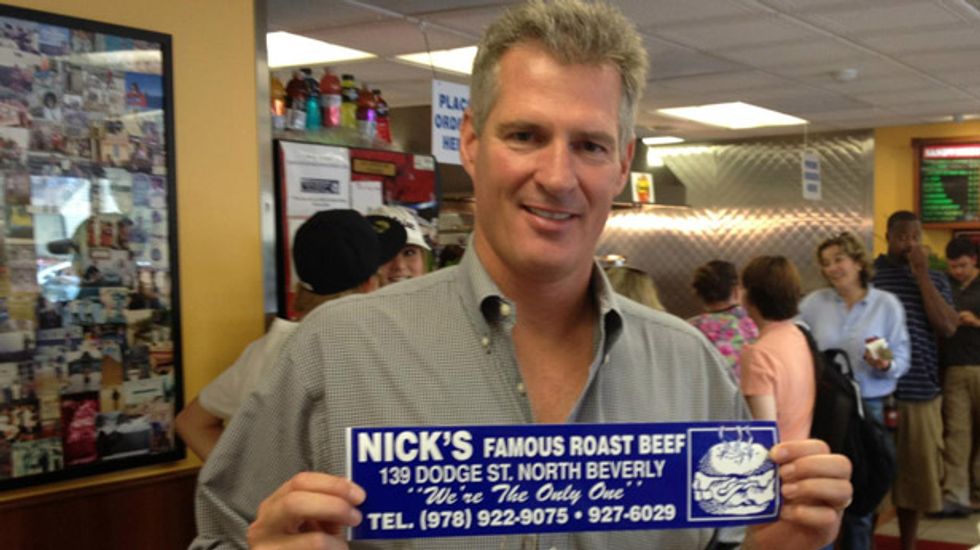 Hunka-hunka burning love-guy Scott Brown, the former senator from the Commonwealth of Massachusetts and centerfold for a ladies whack mag, has had a rough go of it ever since he was fired and replaced by [MRA trigger warning]  A WOMAN in 2012. The himbo with a happy trail has discovered the hard way that, while there is a lucrative after-party market for MILF/GILF's of the Palin persuasion, there is a dearth of opportunities for dudes.

It's hard out there for a FILF.

Following his loss to smarty-pants Elizabeth Warren, Brown picked up some work as a day laborer at Fox News, as well as  a speaking gig here and there while he plotted his next move.

A few months ago he decided to give speed-dating a whirl at GOP Mingle, looking to hook-up with a state seeking a man 'with experience' who could fulfill its every wish and desire. That lucky ducky turned out to be New Hampshire, having responded somewhat affirmatively to his ad: "Fit ex-Senator seeks open-minded state with minimal residency requirements. Must enjoy long walks on the beach, candlelight dinners, overturning Obamacare, and ass-play. 420 okay. No fatties."

The potential for a long term relationship with New Hampshire  is looking to be a bit iffy -- guy-who-is-not-Nate Silver gives Scotty B. a 3% chance of beating [another MRA trigger warning] Democratic incumbent Jeanne Shaheen -- and it was certainly not helped when word got out that Brown was given $1.3 million in stock to be an 'advisor' to Global Digital Solutions Inc.

What exactly is Global Digital Solutions Inc.?  It sounds worldwide. And technical. And they apparently have answers for things.

Oh, it's these guys:

It was founded as a beauty supply company in New Jersey — selling hair spray, conditioners, and shampoos, before reinventing itself as a wireless data firm from California and then again last year as a South Florida-based firearms maker and gun technology innovator.

The company, created 19 years ago to sell cosmetics before switching first to telecommunications and then to firearms, has only a “virtual office,” no current products, no revenue, no patents, no trademarks, no manufacturing facilities, and no experience developing weapons, according to its most recent corporate filings.

But there must be some kind of upside (besides 1.3 million large)  to this deal to convince a fine-upstanding former U.S. Senator with future political aspirations to lend his name to a business that appears to work out of a van on the fringes of a Walmart parking lot.

Accountants said in interviews that Global Digital’s filings raise a number of warning signs for investors, including its varying business model and lack of actual products. The firm reported it has four employees, $271,776 in cash and had $19.7 million in losses as of March 31.

Okay, maybe not. But they've got plans -- big plans -- and they've got former Senator Scott Brown on hand to  advise them through the choppy waters of mergers and acquisitions.

Brown defended the legitimacy of the company, Global Digital Solutions Inc., dismissing concerns that it has announced a series of acquisitions that have not been completed. Among them was an announcement in March that it intended to buy Remington Arms Co. LLC, one of the world’s largest gun manufacturers, for more than $1 billion. That was greeted with derision by Remington and others in the industry.

“It’s a startup company that I’ve been on the board for, what seven, eight months, offering any type of advice when asked,” Brown said in a brief interview after a campaign event at a local gas station highlighting his energy plans.

The good news for Brown is that the company that has nothing on the books -- except for a former senator listed in their prospectus as an 'advisor' in an effort to lure investors -- has seen their stock plunge to less than half of what it was he first signed on, so this will only only look half as sleazy to the good folks of New Hampshire.

Silver linings, and all of that....