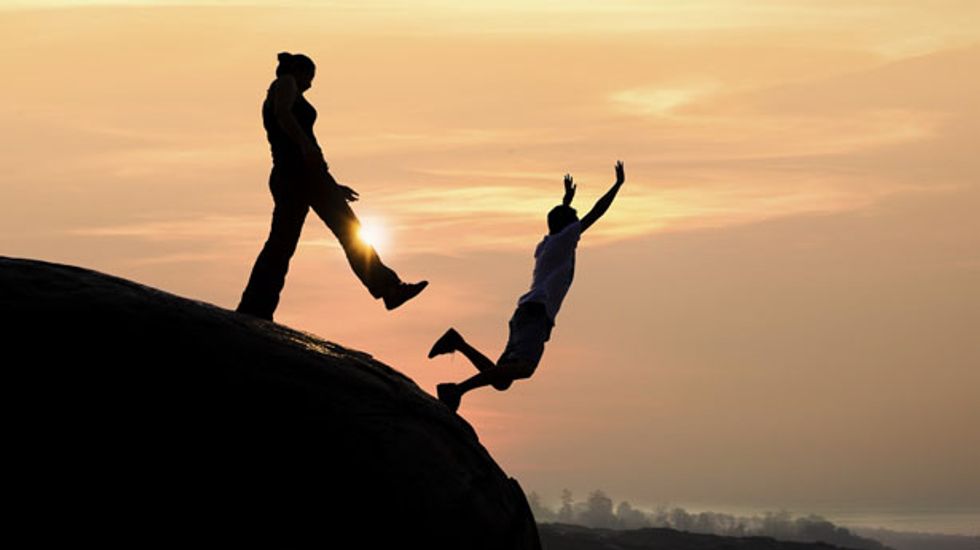 If you're a white man, a dude, a bro, a man's man, a guy, a studmuffin, and you didn't spend your weekend hanging out at a VFW post in the Detroit area, you are probably unaware that you are the most put-upon powerless useless flap of skin attached to a horribly-mutilated-by-a-mohel penis in the history of the world.

Yup, the first International Conference on Men’s Issues rolled into Veterans of Foreign Wars Bruce Post 1146 in St. Clair, Michigan, this weekend and over ONE HUNDRED attendees, from all walks of life -- if by 'all walks of life' you mean: 'middle-aged divorced white guys with anger management issues' -- came together in brotherhood to address the source of all of the pain and suffering and existential angst that afflicts MANkind.

Resolved: Women are to blame.

The conference was originally scheduled at the DoubleTree Hilton in Detroit and had to be moved because, apparently, the Hilton was not large enough to host a convention of over ONE HUNDRED men, which is only slightly fewer people than are attending the World Cup in Brazil which is using a whole country to accommodate them. Presumably more men would have attended  but their bitch ex-wives took all of their money so they couldn't afford the bus ticket so they spent the weekend sitting in their darkened  studio apartments cleaning their guns because a hard rain is a'gonna fall one day and then she'll see, oh yes, she'll see....

So off to the VFW post which can hold them but cannot contain their message which is: 'bitches suck,' but not in the way men's rights activists like.

Adam Serwer drew the short straw and, in a testosterone and bitterness repelling hazmat suit, attended this airing of grievances and learned many educational things, including the fact that it is not all women who are to blame. Specifically everything that is bad in life is the fault of 'the feminists.'

What is a "feminist"?

At the conference, feminism was responsible for turning wives against their husbands, bleeding them dry in divorce proceedings and separating them from their children, levying false accusations of rape and abuse against good men, or creating an ever-present culture of hatred where men are vilified.

Though men’s rights activists who hosted the conference often say sexual assault against men isn’t taken seriously, the audience laughed when speaker Fred Jones mentioned his fears about his son being raped after being arrested in New Orleans.

“He’s kinda small and kinda cute, good looking, you know what I mean?” Jones said. “You know what they do with –” Jones cut himself off. But the audience laughed.

Ha ha ha. Your son got raped by another guy in jail! And it is all the fault of feminists, those rapey emasculating lesbian bitches.

Surprisingly, many of the speakers at Manstock, were women who were there to validate the attendees worst fears.... for a modest speaking fee:

She diagnosed some women with what she called “golden uterus syndrome,” which she explained as what happens when a mother will “fleece your ex-husband in divorce court and take assets you didn’t earn, you deserve it, take that bastard to the cleaners, force a man into fatherhood with an accidental pregnancy, hey, if he wouldn’t commit, sometimes you gotta push him into it.”

So, instead of fleecing "your ex-husband in divorce court and take assets you didn’t earn," Palmatier fleeces men by telling them that their problem is not their own shortcomings. Nope, it all on their ex-wives. That'll be $220 please, same time next week?

Later one of the attendees will sidle up to Dr. Palmatier at the VFW bar, offer to buy her a boilermaker and try and hit on her because "she understands him." After being rebuffed, he'll realize that she is a feminist -- and probably a lesbian -- too and then he'll maybe accept the fact that they are EVERYWHERE and it is useless to resist and he must submit to his matriarchal overladies or perish.

It's hard out there for a man. And Viagra costs extra...

[Wife betrayed her husband by the kick on Shutterstock]