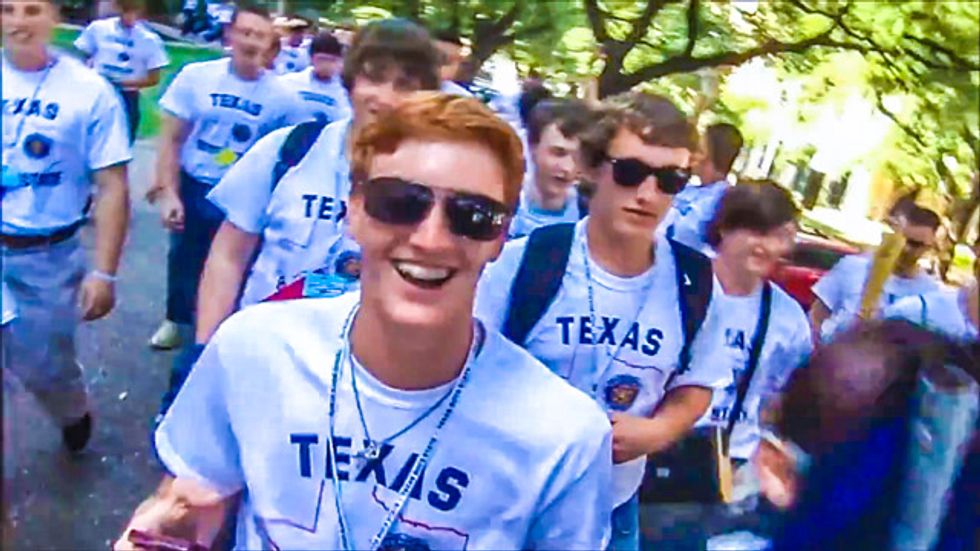 A conference to teach teenage boys about government in Texas was criticized for sexism last week after reports surfaced that the event included photos and speeches that were degrading to women.

Jess Stoner at the Burnt Orange Report obtained photos of materials that attendees of this year's Texas Boys State conference used to campaign for office in a mock government.

One of the campaign posters shows a woman in a bikini with the word "Feds" written across her breasts. The Federalist Party is one of two fictional parties that the boys are assigned to.

Another bikini photo had the slogan, "Feds support transparent policies."

A cell photo also showed part of the platform of the Nationalist Party, which says that women must "notify their community" if they are pregnant and on welfare.

"So you know how sex offenders have to go door to door, basically it's the same concept except the teen pregnant mom has to go door to door," a party leader reported told the attendee who took the cell phone photo. "We're not trying to shame them, we're just trying to get them help from the community."

And during a mock county convention, one candidate hoped that a very short speech would convince the boys to vote for him.

"He just said 'Cold Beer and Titties' and sat down," an attendee recalled.

But Stoner pointed out that the Girls State conference, which is also sponsored by The American Legion, had a much more serious tone.

"The young women I spoke with said they had an empowering experience and felt inspired to run for public office," Stone wrote. "Even though they didn't have a single member of the state legislature speak to them, while more than 30 state representatives, senators, and current and former statewide elected officials visited the boys."

During the conference, the girls legalized same-sex marriage, passed legislation to address rape on college campuses, and debated raising the minimum wage.

"Encouraging more young women to pursue public service in the future is just one way to combat the sexist attitudes of our society and state legislature," Stone observed. "Supporting the young men who speak out against inappropriate behavior and the demeaning treatment of women is another."

Watch videos of the conference below.