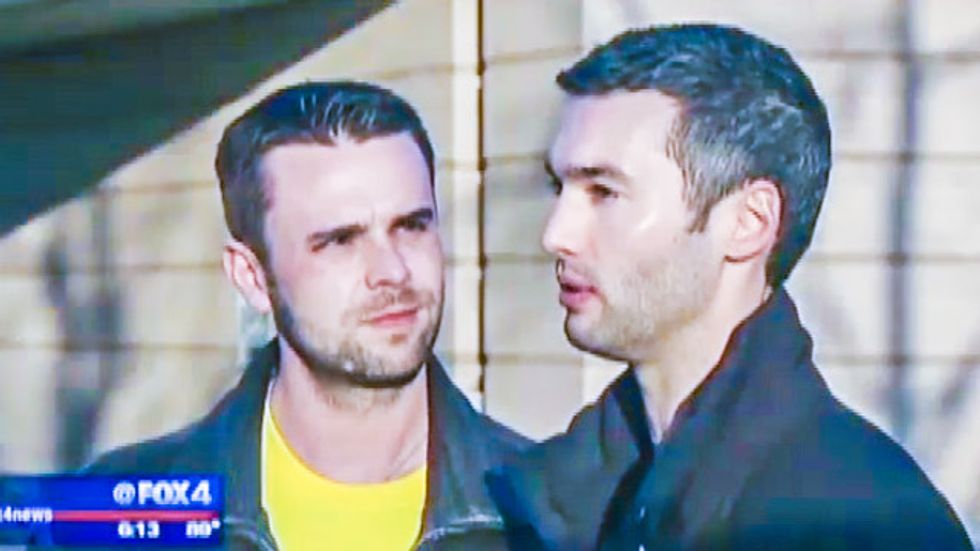 A judge in Texas has refused to list two fathers on the birth certificates of their children because the men are gay.

Same-sex couple Jason Hanna and Joe Riggs, who were legally married in Washington, D.C., both have biological children, who share the same surrogate mother. Neither of the men are listed on their biological child's birth certificate.

Hanna and Riggs had asked a judge to legally recognize them as a family by listing both men on both of the children's birth certificates. Last week, a judge denied their petition.

"On one hand, it's a little scary because as of right now, we don't have full parental rights of our own biological children,” Hanna told KDFW.

Hanna explained to SiriusXM Progress this week that they had provided the court with DNA test results to prove paternity, but the Texas judge refused to put two men on one birth certificate.

The New Civil Rights Movement's David Badash pointed out that the reason the judge refused to put each father's name on his biological child's birth certificates was "because the men are gay and Texas does not recognize same-sex marriage."

"But even if they were straight, they wouldn’t have to go to court to be listed as fathers — the hospital would just automatically list them as they do every day of the year," Badash wrote.

GLAAD's Alexandra Bolles noted that in Texas -- and 17 other states -- judges had discretion to decide if LGBT parents could adopt because the law was "unclear" on the subject.

The judge in this case insisted to KDFW that she was "strictly" following the law.

Both Hanna and Riggs have vowed to continue fighting for their children.

Earlier this year, a federal judge ruled that the Texas ban on same-sex marriage was unconstitutional because it violated the guarantee of equal protection and due process, but the ruling was stayed pending an appeal.

Hanna and Riggs could have an easier time adopting their children if the same-sex marriage ruling is upheld in a federal appeals court.