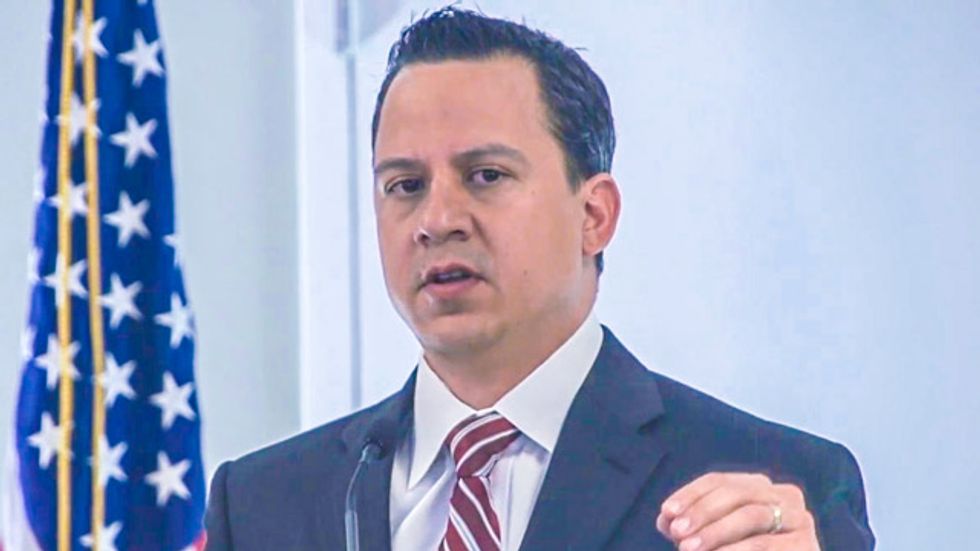 The leader of an anti-LGBT group in Texas said in a recent interview that gay activists effectively wanted "concentration camps" for anyone who refused to sell them a wedding cake.

In a June 20 radio interview with Raging Elephants Radio host Claver Kamau-Imani that was flagged by Media Matters on Tuesday, Texas Values President Jonathan Saenz is asked about a Colorado baker who was ordered to sell wedding cakes to same-sex couples.

"And so the homosexual couple, whether it's man and man, woman and woman, whatever, they go to this specially created commission to deal with this, file a complaint against the business, and so the commission says 'No, you're gonna make this cake, plus, you're going to go to concentration camp,' essentially," Kamau-Imani explained. "Is that what you're telling us, Jonathan?"

"That's right, that's right," Saenz replied. "You know, they tried to do something like that here in Texas -- I think it was a bill by Sen. Rodney Ellis that dealt with hate crime stuff, where they would've forced you to participate in an event of the quote-unquote community that you had offended."

"I mean, this is what they want. I mean, there's no question. I've seen it," he continued. "I've seen them try to do it with legislation here in Texas at the state level."

"It is a goal of theirs to put people in jail that disagree with homosexual marriage, without question- - or the homosexual lifestyle."

According to GLAAD, Saenz has defended so-called "ex-gay" therapy as a valid science in Texas. The Texas Republican Party officially backed the discredited "reparative therapy" in its party platform released earlier this month.