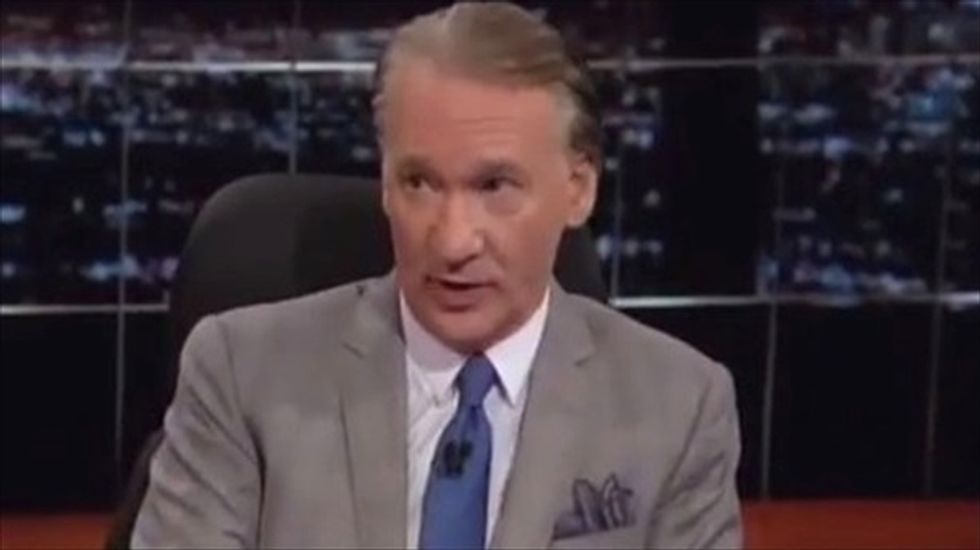 The thing about "gun culture," Real Time host Bill Maher said on Friday, is that there's not much actual culture -- it's really about the guns, and their owners' unhealthy attachment to them.

"You guys aren't just firearm enthusiasts," Maher said. "You're ammosexuals. And before you try and deny that you have some sort of unnatural romantic relationship with your gun, consider this: You're taking it out to dinner. Because it completes you. Get a room."

Maher advised gun ownership advocates to remember that having firearms didn't give them a license to scare the rest of the population.

Groups like Open Carry Texas, Maher pointed out, had done what "thousands of progressive legislators" had failed to accomplish: get their guns banned from several restaurant chains following their public eatery excursions. To illustrate his point, Maher showed a picture of one of the group's members brandishing what appeared to be an assault rifle while wearing his camouflage hat.

"What does he or any of these 'patriots' imagine is going through the minds of sane people when they see this?" Maher demanded. "'Oh my, it looks like Vladimir Putin has annexed Chipotle, that's alarming.'"

Maher also shot down (so to speak) the group's argument that they needed to conduct these demonstrations or risk "losing" their Second Amendment rights.

"Well no, Cletus," he scoffed. "You don't. They're constitutional rights, therefore you can't lose them. Perhaps you're thinking of frequent flier miles."

It has been another grim week in Russia as protests continue across the country after Vladimir Putin instituted a military draft. Things aren't going well in his Ukraine invasion with more and more Russian soldiers dying, surrendering or being captured.

There has also been an outbreak of Russian military leaders falling out of windows or shooting themselves and their families. On Thursday, Putin's defense minister was encouraged by his own team to shoot himself, the Daily Beast reported, citing a Telegram post from one of the puppet Russian leaders in the Kherson region of Ukraine.

'This has made me sick': Outrage erupts after video shows daycare employees tormenting children with Halloween mask

Outrage is growing over a viral video showing a daycare worker at a North Mississippi daycare using a Halloween mask to scare terrified children. According to reports, four employees at Lil' Blessings Child Care & Learning Center have been fired over the incident and Monroe County Sheriff Kevin Crook confirmed with WCBI that his department is investigating.