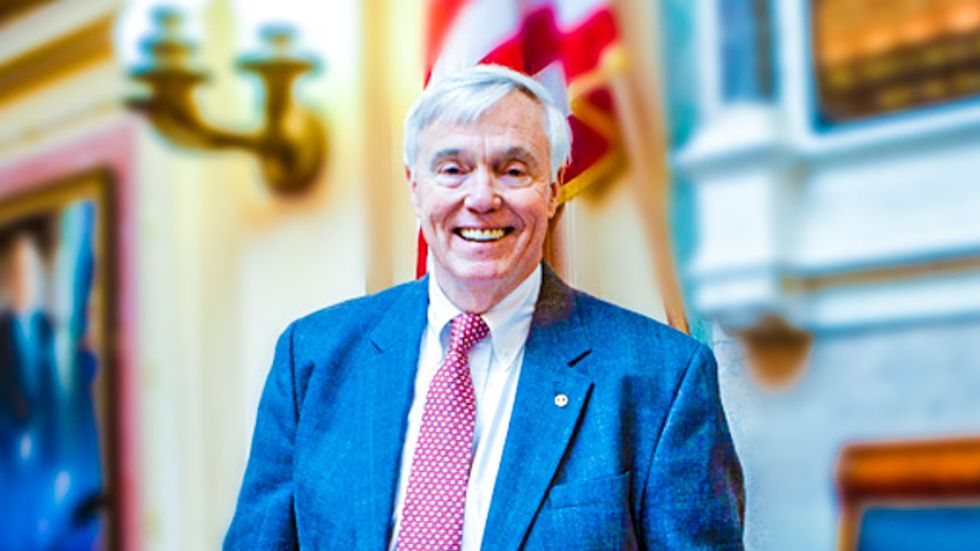 The Virginia Speaker of the House has recently used a series of gimmicks and unusual tricks -- including having Capitol Police enter the governor's unoccupied office, and refusing to recognize line-item vetoes -- to push through a budget that blocks expanded health care for the poor.

After being sworn into office earlier this year, Democratic Gov. Terry McAuliffe pledged to fight to use the funds provided by President Barack Obama's health care reform law to expand Medicaid. Virginia Republicans, however, eventually convinced a Democratic state senator to resign, giving them the ability to pass a budget that included two amendments that blocked federal dollars for expanding Medicaid, and required the governor to get express permission from the Legislature before attempting any type of expansion.

According to the Richmond Times-Dispatch, the House had told McAuliffe's administration to be prepared to receive the budget no sooner than the Monday after Father's Day. But the House pushed it through earlier than expected, and House Speaker William J. Howell ordered his clerk to have Capitol Police enter the governor's office to deliver it, even though the executive suite was unoccupied during the holiday.

The timing of the delivery is important because McAuliffe only has seven days to read the budget, sign it, issue vetoes or take other actions after it's delivered.

In a letter to the Speaker dated last week, chief of staff Paul Reagan called the breach "unacceptable."

“What occurred here Sunday is unacceptable,” he continued. “Two employees of the speaker of the House of Delegates were given access to an area of the governor’s office where sensitive files and materials are kept."

Reagan pointed out that there was a good reason that the office was "surrounded by three security perimeters."

"Even on a normal business day, very few people — including members of the governor’s Cabinet — can gain access to this suite of offices," he noted. "We certainly do not expect to have agents and employees of the General Assembly roaming through these offices on weekends."

The administration argued that Howell had refused to wait for the governor to return so that he would have two less days to read the budget before acting on it.

McAuliffe announced last week that he would issue line item vetoes for the two amendments that could prevent him from expanding Medicaid.

But in a special session on Monday, Howell ruled that those vetoes were out of order, which allowed the Legislature to ignore them without an override vote.

“I am pleased that the General Assembly upheld six of the eight vetoes that I applied to the budget without controversy,” McAuliffe said in a statement on Monday, adding that he was “continually surprised and disappointed by the lengths to which Republicans in the House of Delegates will go to prevent their own constituents from getting access to health care.”

For its part, Republican leadership said that it stood behind both the decision to enter the governor's office, and ruling vetoes out of order.

"Speaker Howell’s rulings regarding the governor’s actions are fully supported by the Constitution of Virginia and by unambiguous and on-point rulings by the Supreme Court of Virginia," a press release from Senate Republican Leader Thomas Norment Jr. said. “Although it is not novel for the executive branch to attempt to expand its authority, it is disappointing that this governor opted to do so in a manner clearly contradicting established precedent and previous case law.”

“It is my hope that Governor McAuliffe will abandon his efforts to unilaterally impose Obamacare’s Medicaid expansion scheme on the people of Virginia,” Norment remarked.

Outraged Virginia Democrats on Wednesday were calling for a criminal investigation into Howell over the so-called "break in."

"Does this sound like something out of Richard Nixon/Watergate break-ins or what?!?" the blog Blue Virginia observed. "So now what? Criminal investigation into the actions of Speaker Howell and others who instigated this? If not, why not?"