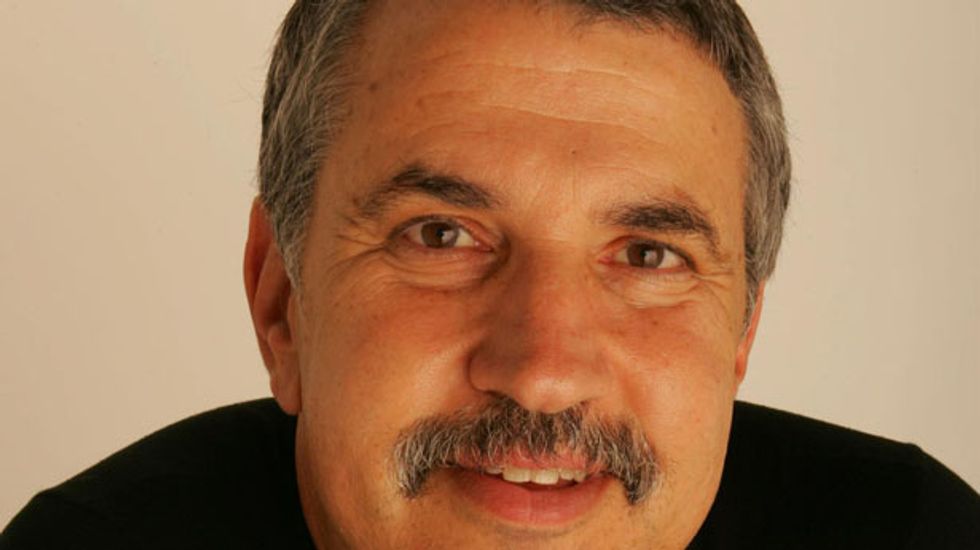 Walking TED talk and taxi-driver-chatter-upper Tom Friedman is obviously not a big fan of Iraq. Possibly because it doesn't seem like a place where Apple would extend their global empire; building factories full of low-wage worker bees churning out iToothbrushes or whatever the hell they are going to iMake next in an effort to suck every last dollar out of every last wallet before Steve Jobs returns to Earth to take them all to iHeaven.

Note to Apple: iWallet. Get on it.

Friedman, who likes his countries like he likes his women: hot, dry, and financially liquid, seems to have a real war boner for Iraq.

Back in 2003 he explained that there was this bubble, you see. And it was kind of  like  the tech bubble, but not quite. It was a terrorism bubble and, instead of being full of pet.com or webvan.com or hotnakedphyllisschlafly.com, it was full of swarthy people with box cutters who hated our freedom and our open society and our innate God-given goodness.

One version "claims" that the swarthy-muslimy bubble burst on 9/11/2001 and that is what brought downt the Twin Towers (it was in all the papers, you can look it up).

Another, more logical, version has it that there was a super-secret conspiracy involving the NSA, CIA, FBI, NYPD, FDNY, all branches of the U.S. Armed Forces including the Coast Guard which is totally one too -- so stop laughing, the Bilderberg Group, Disney, Cinnabon, and HBO to destroy the U.S. Economy by melting the steel reinforcing the towers using an underground  Volcano Machine developed by Northrop Grumman, GE, and Build-a-Bear and housed in Building 7.

Both of those are equally plausible depending upon your daily lead intake.

Either way, to Tom Friedman it didn't matter because, as Tom Friedman so eloquently put it in Aspen Institute terms, this 'bubble thing' had to be dealt with:

....there was only one way to do it because part of that bubble said ‘we’ve got you’ this bubble is actually going to level the balance of power between us and you because we don’t care about life, we’re ready to sacrifice and all you care about is your stock options and your hummers. And what they needed to see was American boys and girls going house to house from Basra to Baghdad uhm, and basically saying 'which part of this sentence don’t you understand?'. You don’t think we care about our open society, you think this bubble fantasy we’re going to just let it go, well suck on this. Okay. That, Charlie, was what this war was about. We could have hit Saudi Arabia. It was part of that bubble. We could have hit Pakistan, We hit Iraq, because we could. And that’s the real truth. “

So, of course, we did what we did because we could so we did.

Then we kind of bailed  because America went 'whoopsie-daisy, this looked a hell of a lot easier when we played Call Of Duty: Suck On This, Muslims.'

Now that we have completely destabilized the region and things have turned to poop, Tom Friedman has some advice for Iraq although we specifically told him to keep his stupid face shut:

THE disintegration of Iraq and Syria is upending an order that has defined the Middle East for a century. It is a huge event, and we as a country need to think very carefully about how to respond.

Oh. When we have a 'huge event,' we just take a blind swing in a crowd hoping to connect with an evildoer. But when we go in and trash somebody else's place and turn it into an abattoir, all of the sudden we'll get back to next Wednesday maybe, have your girl call my girl, leave a message.

Friedman goes on to state his five demands of Iraq, which can be summed up by eloquently stating them Aspen Institute terms: 'things are fucked up and bullshit, fix it you guys!'

But here is Friedman's "suck on this" moment:

Maybe Iran, and its wily Revolutionary Guards Quds Force commander, Gen. Qassem Suleimani, aren’t so smart after all. It was Iran that armed its Iraqi Shiite allies with the specially shaped bombs that killed and wounded many American soldiers. Iran wanted us out. It was Iran that pressured Maliki into not signing an agreement with the U.S. to give our troops legal cover to stay in Iraq. Iran wanted to be the regional hegemon. Well, Suleimani: “This Bud’s for you.” Now your forces are overextended in Syria, Lebanon and Iraq, and ours are back home. Have a nice day.

We still want to forge a nuclear deal that prevents Iran from developing a bomb, so we have to be careful about how much we aid Iran’s Sunni foes. But with Iran still under sanctions and its forces and Hezbollah’s now fighting in Syria, Lebanon and Iraq, well, let’s just say: advantage America.

Finally, while none of the main actors in Iraq, other than Kurds, are fighting for our values, is anyone there even fighting for our interests: a minimally stable Iraq that doesn’t threaten us? And whom we can realistically help? The answers still aren’t clear to me, and, until they are, I’d be very wary about intervening.

Shorter Tom Friedman: We broke it, you bought it. Get back to me in six months [Friedman unit]. Until then ....  suck on it.