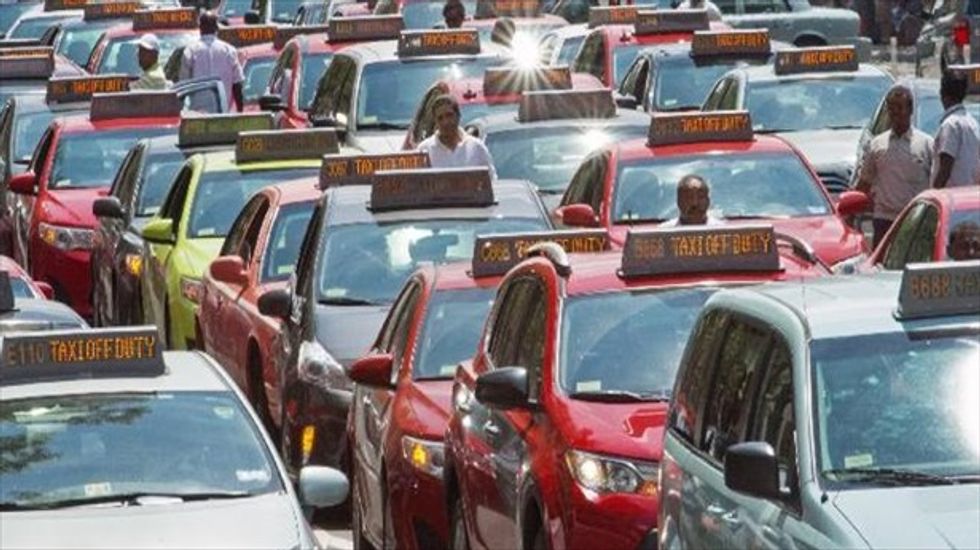 Washington, DC taxi drivers park their cars in protest as they demand an end to ride sharing services such as Uber X and Lyft on June 25, 2014, in Washington, DC [AFP Photo]

Washington (AFP) - Taxi drivers snarled traffic in downtown Washington on Wednesday in protest against smartphone car-hailing services such as Uber, which they say are cutting into their business.

"All they want is a level playing field," said Teamsters official Ferline Buie, who dropped off a letter to city hall demanding a ban on private sedan services pending fresh regulations.

Taxi drivers in London, Paris, Berlin and Rome staged similar protests on June 11, saying unlicensed drivers and chauffeur services using Uber have been chipping away at their client base.

While San Francisco-based Uber is the main target of the drivers' ire, it's only one of many new smartphone-dependent car services seen as bypassing strict regulations faced by licensed taxi drivers.

"The DC drivers have seen the protests across the United States and around the world," Buie said.

"And today it is their turn to join the growing chorus calling for these services to follow the same rules and regulations that they must follow.”

Undeterred, Uber -- present in 128 cities in 37 countries, and valued at $17 billion -- sent out an email Wednesday to its users in Washington pitching its lower-cost UberX service, which it claimed is "better, faster and cheaper than a taxi."