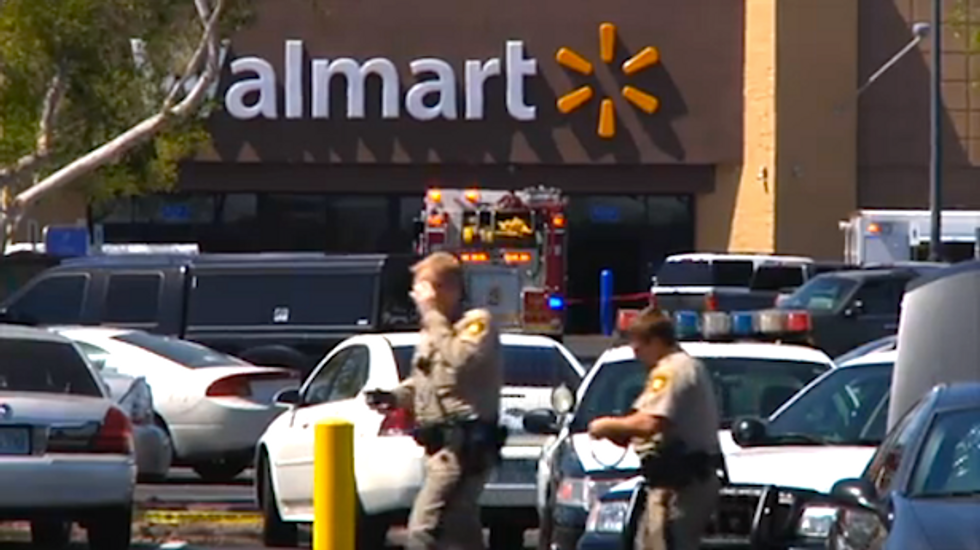 An armed man and woman shouting about a "revolution" opened fire and killed two Las Vegas policemen who were eating lunch in a pizza parlor on Sunday, then fatally shot a civilian in a nearby Wal-Mart store before killing themselves, police said.

One of the two officers managed to return gunfire before the suspects fled to an adjacent Wal-Mart, where they killed a bystander inside the front door, then exchanged gunfire with police who pursued them further into the store, Clark County Sheriff Douglas Gillespie said.

Moments later, the female suspect shot her accomplice to death, then took her own life, Gillespie told reporters at a late-afternoon news conference.

Police have not released much information about the couple, although they're investigating their possible links to the white supremacist movement and the militia standoff at Cliven Bundy's Nevada ranch.

A city police spokeswoman, Laura Meltzer, earlier told Reuters the two suspects died after they "engaged in what is being described as a suicide pact."

She also said the suspects had grabbed the fallen officers' weapons before fleeing to the Wal-Mart, which Gillespie confirmed.

Meltzer said preliminary information received by police at the scene, showed one or both of the suspects had yelled a statement, "This is a revolution," as they carried out the initial attack. Gillespie said in the statement this was unconfirmed.

Sources said the shooters draped American Revolution-era Gadsden flags -- bearing the slogan "Don't tread on me" -- on the victims' bodies.

The police spokesman said investigators were also at a loss to explain the attack.

"What precipitated this event we do not know. My officers were simply having lunch when the shooting started," he said.

He said no information was being released about the identity of the slain bystander, though the Las Vegas Review-Journal reported the victim was a woman.

Gillespie said the two slain officers had been on routine patrol in the East Las Vegas area when they stopped for lunch.

The Review-Journal, citing an unnamed law enforcement official briefed on the incident, reported that the female suspect approached one policeman from behind and shot him in the head as he was refilling his soft drink, then shot the second several times as tried to draw his pistol.

Police have not identified the suspects, but neighbors said they were in their 20s and had recently moved to the Las Vegas area.

Investigators said they found swastika symbols among the couple's belongings.

Neighbors said they suspected the couple may have used methamphetamine, and they said the pair talked about conspiracy theories and their plans to kill police officers.

One neighbor said the man, who dressed as Peter Pan to work as a street performer, claimed he had been kicked off Bundy's ranch, where militia members have gathered to protest federal action against the rancher in a grazing dispute with the government.

But the rancher's wife denied a link between the armed protesters and the fatal shootings.

“I have not seen or heard anything from the militia and others who have came to our ranch that would, in any way, make me think they had an intent to kill or harm anyone,” Carol Bundy said.