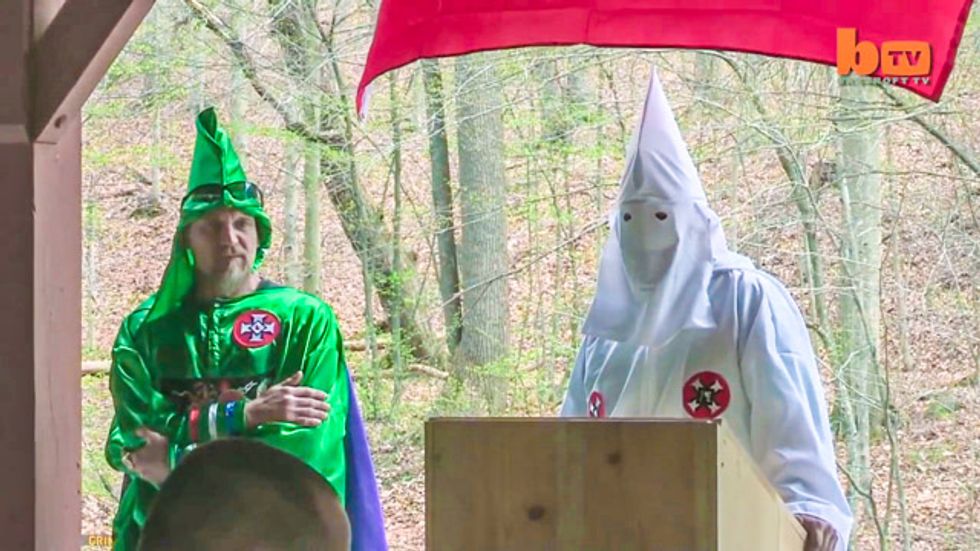 Law enforcement officials in Colorado are investigating after soldiers at Fort Carson found materials trying to convert them into white supremacists to fight for a "white nation" in a coming race war.

According to The Army Times, photos of recruitment fliers were discovered by someone claiming to be a paratrooper at Fort Carson, who posted them to Reddit on Tuesday.

The Reddit user said that he and other paratroopers had “found about a dozen sealed plastic bags blowing around Fort Carson with this flyer and a CD inside.”

“Ever wonder if you are fighting for the right side?” the flier asks, urging the soldiers to help "secure the existence of our people and a future for White children.”

Brian Levin, director of the Center for the Study of Hate & Extremism at California State University, told The Army Times that military personnel were valuable to white supremacists groups because of their training and tactical skills.

“It’s like, do the Yankees want a great pitcher,” Levin explained. "Neo-Nazi and white supremacist groups are happy to have people commit acts of violence in the name of their ideology without being a card carrying member of their group — lone wolves."

Earlier this month, Barcroft TV reported that a surge of Ku Klux Klan members with military experience had allowed the Loyal White Knights to conduct combat training for the first time in its history.

In 2012, federal investigators found that a small number of white supremacists had infiltrated the military after veteran Wade Michael Page murdered six people at a Sikh temple in Wisconsin because he mistook them for Muslims.

Allen West, a former Republican congressman and retired military officer, reacted to the news that white supremacists were distributing fliers at Fort Carson by declaring that it was a liberal conspiracy to undermine the military.

"Why do I question this? Because I know the tactics of the liberal progressive Left and besmirching the military to prove their long-held thesis is very important," he wrote. "Let the Army do its due diligence and not have this become a political issue to discredit our military — a Leftist tactic."

"Seems to me radical Islamic jihadists have done a fairly good job of infiltrating our military — why doesn’t the Left confront that issue?"

Watch the video below from Barcroft TV, broadcast June 8, 2014.