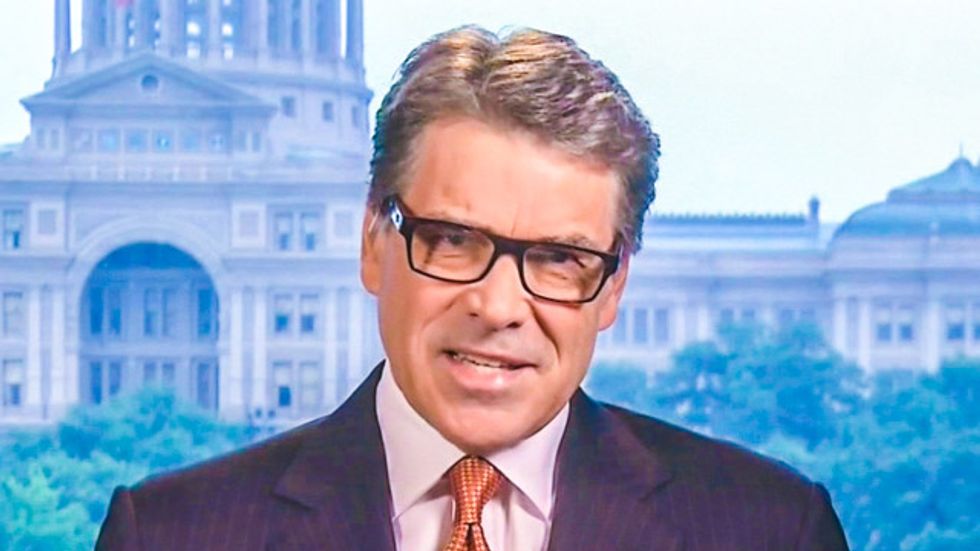 Speaking to Fox News last week, Perry had asserted that the president was responsible for the growing crisis of women and children immigrants coming across the border.

“We either have an incredibly inept administration, or they’re in on this somehow or another,” Perry opined. “I mean I hate to be conspiratorial, but I mean how do you move that many people from Central America across Mexico and then into the United States without there being a fairly coordinated effort?”

During a Sunday interview on ABC News, host Martha Raddatz gave the Republican governor a chance to back away from his conspiracy theory.

"Governor, do you really believe there’s some sort of conspiracy to get people into the United States by the federal government, by the Obama administration?" Raddatz asked.

"When I have written a letter that is dated May of 2012, and I have yet to have a response from this administration, I will tell you they either are inept or don’t care, and that is my position," Perry said, doubling down on the theory. "We have been bringing to the attention of President Obama and his administration since 2010, he received a letter from me on the tarmac... I have to believe that when you do not respond in any way, that you are either inept, or you have some ulterior motive of which you are functioning from."

The former Republican presidential candidate added that his theory was proved by the fact that the president had not responded to his letter, and had not deployed drones to the border.

"Unless we secure our southern border, this is going to continue to be a massive amount of individuals that are coming to the United States," Perry warned. "And, frankly, we don’t have a place to house them as it is. And if we have a major event, a hurricane that comes in to the Gulf Coast, I don’t have a place to be housing people who are displaced because this administration..."

At that point, Raddatz interrupted Perry and ended the interview.

"Okay, Governor, I'm going to have to stop you there," she said. "But thank you very much for joining us."

Watch the video below from ABC's This Week, broadcast July 6, 2014.