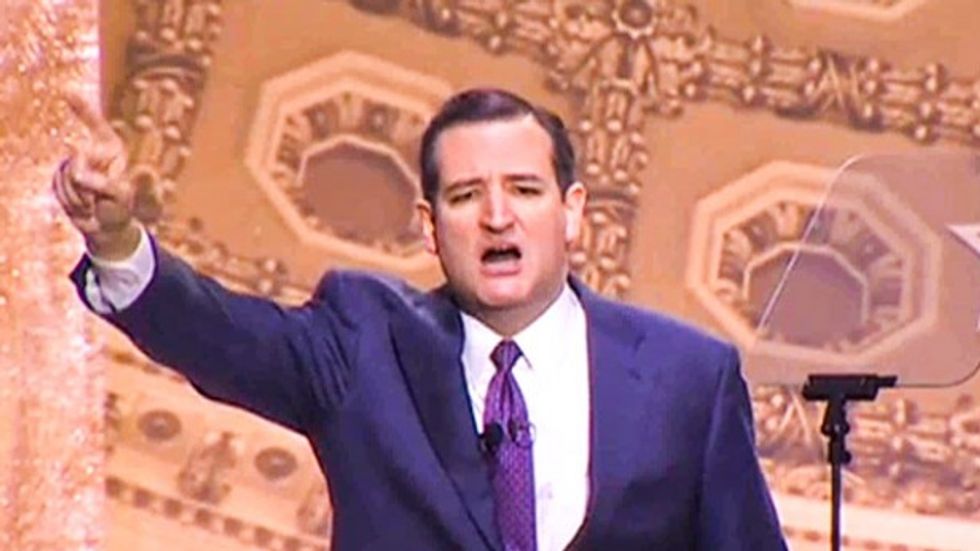 GOP politicians, Tea Party enthusiasts, racists, homophobes, misogynists all contribute to make the world a terrible place on a daily basis. So don't blame yourself if you're not able to keep up with all the terrible people and the terrible things they do. How could you? Luckily, I took it upon myself to curate a collection of some of the week's worst offenders. I apologize in advance to all the people I left off the list. But don't be discouraged. If you're truly dedicated and disciplined in your assholery, you're bound to make it onto the list some time soon.

Senator Ted Cruz (R-TX) wore his psychopathic heart on his sleeve, Monday, during a radio interview with Sean Hannity, of online dating site "Hannidate" fame. Though Cruz was born in Canada and is the son of a Cuban immigrant, the Tea Party darling is surprisingly callous when it comes to other people who committed the crime of being born outside of the United States. To be fair, Cruz acknowledges the horrors faced by children fleeing Central America: These little boys and little girls are being subjected to physical violence, to sexual violence" at the hands of drug cartels who "will force one little boy or one little girl to cut off the fingers or ears of other little boys or little girls.” Cruz describes the abuse, which leaves its victims "maimed," as a "heartbreaking," "humanitarian crisis." What, pray tell, is Cruz's solution to this nightmarish reality faced by the children of Central America? Tighter borders, less amnesty and returning them to the country where they suffered horrendous violence.

I hate to give the  aerial wolf hunter any more attention, but I must give Sarah Palin props for the outstanding heinousness she displayed this week. Of course, jumping on the Impeach-President-Obama-Bandwagon (IPOB) is hardly news-worthy. But jumping on the IPOB while disrespecting survivors of domestic violence AND Spanish speakers is an impressive feat requiring extraordinary coordination and dedication. In her brilliant op-ed in Breitbart, Palin wrote,

Enough is enough of the years of abuse from this president. His unsecured border crisis is the last straw that makes the battered wife say, “no mas.”

Her metaphor, which hijacks violence against women to make a political point that has nothing to do with violence against women isn't just offensive and insensitive, but incoherent. Really, Sarah? Even if we accept your premise, does the President being too soft on "illegals" really make you think of domestic violence? Couldn't you have at least used an abuse metaphor that had some chance of being at all convincing? How about denial? Enabling? And there's an accent over the a in "mas." It's "más," not "mas." "Mas" means "but." "Más" means "more." I know. I'm giving advice about accents... in another language... to Sarah Palin. If our relationship has any chance of working, I'm going to really have to adjust my expectations.

Bob Frey, is more than just a Republican candidate for the Minnesota House of Representatives. He's  an expert ignoramus conspiracy theorist with no understanding whatsoever of science. But, hey, that makes him an ideal candidate for the GOP, right? As  Frey revealed on Wednesday, his opposition to the "gay agenda" is "more about sodomy than about pigeonholing a lifestyle.” (Pigeonholing? So, that's what we're calling it these days?) Because sodomy, unlike penis vagina sex, scientifically speaking, kills:

When you have egg and sperm that meet in conception, there’s an enzyme in the front that burns through the egg... so the DNA can enter the egg.

sperm is deposited anally... it’s the enzyme that causes the immune system to fail.

Luckily, because Frey so obviously cherishes education, he has passed down his scientific learning to his son, Mike Frey.

You probably remember Missouri Republican Todd Akin as the man who made "legitimate rape" cool again. Or at least thought it was cool to use the term to undermine women, rape claims and reproductive freedom. Back in 2012, he explained why abortion exceptions for rape are a moot point:

If it's a legitimate rape, the female body has ways to try to shut that whole thing down.

In other words, women who get raped just don't get pregnant. So no biggie. Ban abortion all the time!

Akin, who probably regretted sinking his own senate campaign and demonstrating that the GOP was indeed fighting a War on Women, regretted his word choice, explaining, “All of us are fallible, we make mistakes, and we say things the wrong way.”

But, in great news for delusional pseudo-science enthusiasts and misogynists world-round, Akin is now apologizing for having apologized for his comments. In his soon-to-be-released book, “Firing Back: Taking on the Party Bosses and Media Elite to Protect Our Faith and Freedom," he lets himself off the hook because... Google... and the liberal media:

My comment about a woman’s body shutting the pregnancy down was directed to the impact of stress on fertilization. This is something fertility doctors debate and discuss... Doubt me? Google ‘stress and infertility,’ and you will find a library of research on the subject

By asking the public at large for forgiveness... I was validating the willful misinterpretation of what I had said.

The conservative Commentator Ben Shapiro outed the Obama administration as "borderline Jew-hating."  On Thursday's edition of The Kelly File on Fox News, Megyn "Jesus is White" Kelly and Shapiro criticized The President for urging Israel to use restraint.

Here is the logic behind Shapiro's statements. Obviously, anyone who is at all critical of the actions of the Israeli government is against Israeli people. Just like anyone who was, say, at all critical of the U.S. Government's actions in Iraq, hates America and Americans. But it's worse than that. Apparently, all Jews, from the left to the right, unquestioningly support all actions of all Israeli governments, whether they are Likud or Labor. And FYI, I'm a Jew, so please call me a self-loathing Jew and not an Anti-Semite when you criticize me for daring to reject the premise I just described.

A Covid-19 variant spreading in India is more contagious and may be dodging vaccine protections, contributing to the country's explosive outbreak, the World Health Organization's chief scientist said Saturday.

In an interview with AFP, Soumya Swaminathan warned that "the epidemiological features that we see in India today do indicate that it's an extremely rapidly spreading variant".

There is a heavy police presence in Manhattan following a shooting in Times Square.

"A mother and her 3-year-old daughter were shot Saturday evening in Times Square, police sources told The Post. The gunfire erupted just before 5 p.m. at West 44th Street and Seventh Avenue," the NY Post reports. "The mother was struck in the leg and the child was hit in the upper torso, law enforcement sources said."