Caveman rapist accessories are a huge hit on Fox News 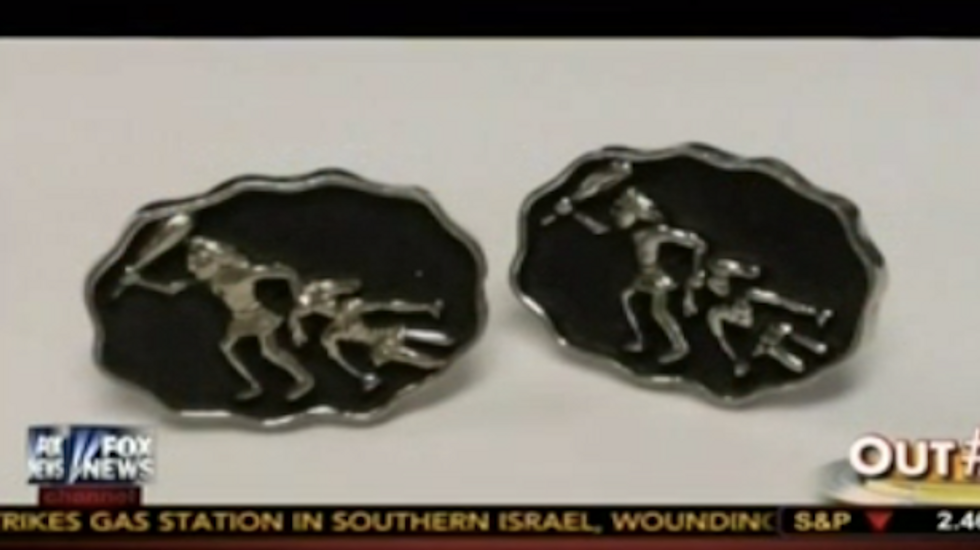 If there's one thing men and women can agree on, it's that accessories depicting pre-historic rape are awesome.

But don't take my word for it. Check out what happened on "Outnumbered," the Fox TV  program featuring four lady anchors and one lucky guy guest. With its daring coverage of such topics as apps that let you stalk your boyfriend's cell phone, the show offers TV journalism at its best. But that doesn't mean "Outnumbered" doesn't know how to have a good time. On Friday, as the episode was wrapping up, an extremely astute and observant Sandra Smith pointed out something(s) adorning the wrists of guy guest Charles Payne, the businessman, TV and radio show host and settlement-paying alleged violator of the SEC: "I just caught the bling on your cufflinks. What are the cufflinks by the way?"

Payne went on to describe the scene captured by his cufflinks with the clarity and detail of an art historian or anthropologist:

This is a, this is a caveman dragging a woman by the hair with one club in one hand and the woman in the other hand.

The women, understandably, chuckled with delight.

All I’m trying to say, I am intimidated by you guys and I have to overcompensate. I snuck the cufflinks out of the house without my wife knowing.

The women continued to laugh at the rape-depicting jewelry, which, I must say, really did make the outfit. In an age when so many men depend on their mothers and wives to shop for them, Payne demonstrated refreshing initiative, stylistic flair, and openness about Neanderthal violence against women.

Of course, if you follow Charles Payne at all, you won't be surprised by his risk-taking truth telling.  How many TV commentators are brave enough to point out that “lavish and generous” Social Security Disability benefits turn men into "modern-day eunuchs."