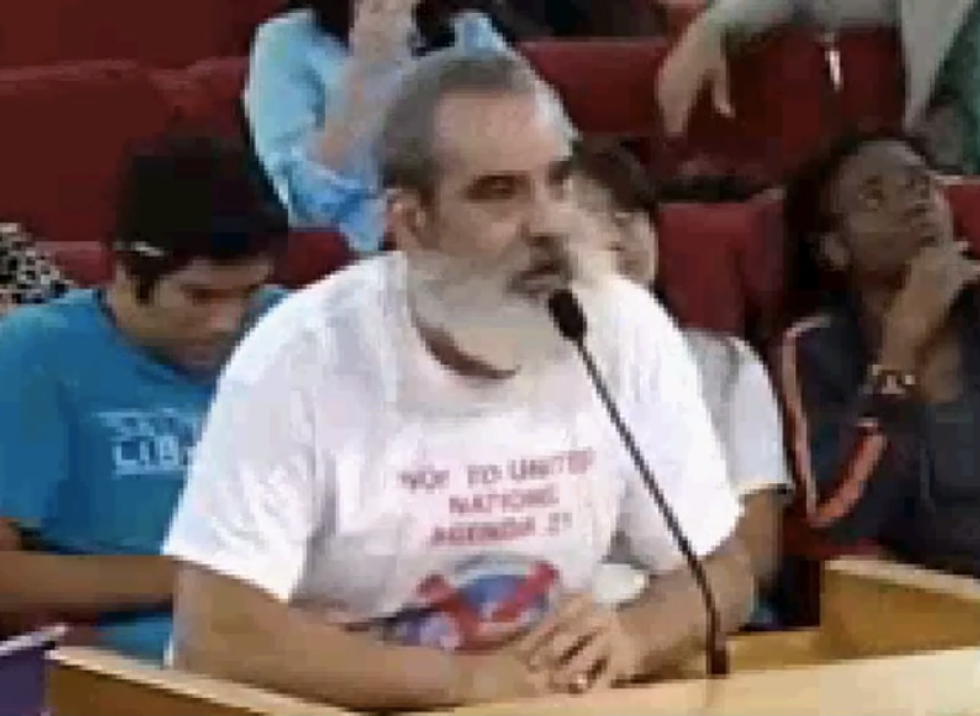 A 54-year-old Florida man is in jail after he threatened to shoot the members of the Miami-Dade County Commission on Tuesday.

According to the Miami Herald, Jose Antonio Fernandez attended the meeting to tell county officials that if they seized his property, he would have "the right to shoot every last one of you."

“Will you please remove him completely from the building, and follow up on that?” said Chairperson Rebeca Sosa to a pair of sergeants-at-arms who flanked Fernandez and led him from the room.

"Enough is enough!" Fernandez shouted. "This is America!"

Fernandez has been locked in a dispute with environmental regulators over violations of wetlands preservation codes. The Department of Environmental Resources Management maintains that Fernandez' plant nursery -- located in a rural area south of Miami called Los Palmas -- has racked up more than $300,000 in fines for environmental violations.

The government seized the nursery when Fernandez refused to pay the fines. Now, his home is set to be sold at a foreclosure auction later this month.

Wearing a T-shirt emblazoned with the slogan "No to United Nations Agenda 21,” Fernandez railed at the 12 assembled council members as well as Miami-Dade Mayor Carlos Gimenez.

“You confiscated my land already,” he said. If the government proceeds with its plan to sell his house, Fernandez said, "the 'bleep' is going to hit the fan.'

He went on, “And I said, 'Enough. I am the people.' And the time that you sell the house, my Constitution gives me the right to shoot every one of you. Shoot ’em!”

Fernandez' situation in some ways mirrors that of Nevada rancher Cliven Bundy, who briefly became a conservative hero for defying the U.S. Bureau of Land Management, to whom he owes millions of dollars in grazing fees. Bundy and a group of armed militia stood down federal authorities earlier this year.

"Agenda 21" is a sustainable development plan proposed by the United Nations. It is non-binding for member countries, who only participate on a volunteer basis. Far-right conspiracy theorists, however, believe that it is actually a sinister plan to implement a one-world fascist government through the use of mind-control.

The Herald reported that Fernandez was charged with "13 felony charges of threatening to harm a public servant -- one for each of the 12 commissioners present and for Mayor Carlos Gimenez -- and a misdemeanor charge of disorderly conduct." He is being held in Miami-Dade County Jail on $97,500 bond.