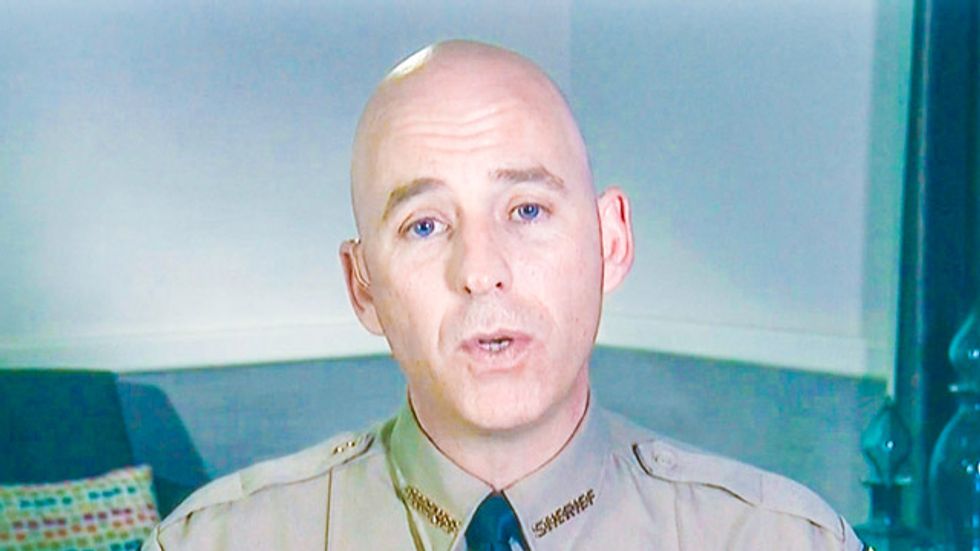 On Tuesday, angry protesters had used trucks to block a road near Oracle in response Pinal County Sheriff Paul Babeu's press release revealing that 40 refugees had been invited to stay at a ranch for boys.

Although the bus filled with refugees never came, Republican congressional candidate Adam Kwasman attended the protest, and mistakenly accused a YMCA bus of being an "abrogation of the rule of law."

Costello spoke to Babeu on Wednesday, and asked him what was so dangerous about the refugee children that he felt the need to publish their bus route.

"Well, that's the question that I've raised," Babeu explained. "Not one answer from anyone in Homeland Security in response to this when we know, in fact, they're coming."

"But no one was breaking any laws," Costello pointed out. "And it's your job to enforce the law."

"And I do enforce the law," the sheriff insisted, adding that he was already "fighting drug cartels," and apprehending "illegals."

"Here's the thing," Costello interrupted. "There's no proof that any of the kids on that bus were gang bangers or drug dealers or anything because you know nothing about them, and neither do the people on the streets, right?"

The CNN host explained that local advocacy groups had accused Babeu of "recklessness" for "the fear-based panic" that he had caused.

Babeu asserted that he was forced to reveal the location of the children because the federal government had failed to contact him with information about what kind of people were on the bus.

"But again, no law was being broken," Costello reminded him. "And it's your job to enforce the law, and to find a peaceful way to do that. Right?"

"What about the laws enforced on you and on me and every other citizen?" Babeu shot back. "But when it comes to immigration, there is no law! There is no consequences."

Watch the video below from CNN's Newsroom, broadcast July 16, 2014.