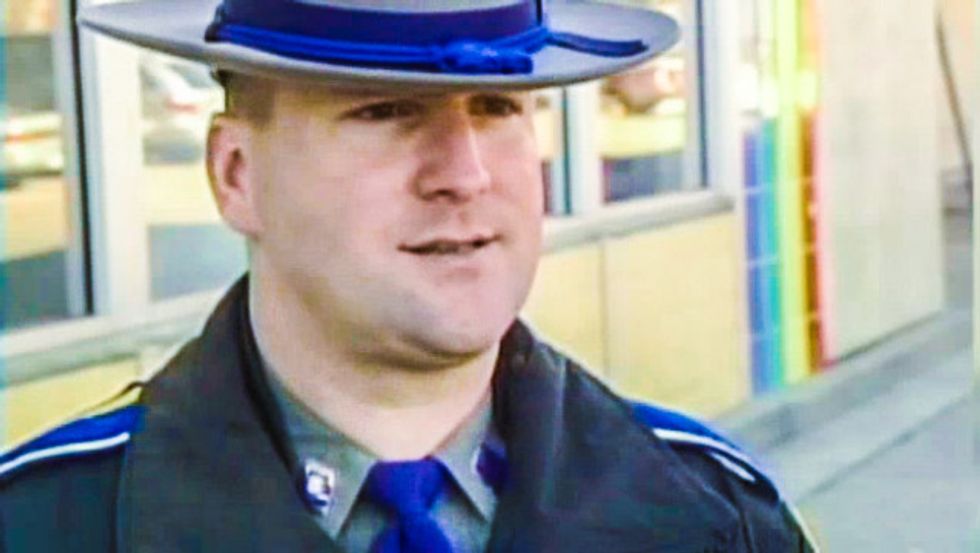 A 45-year-old Connecticut state trooper admitted in court this week that he stole a gold crucifix and cash from a dying motorcyclist.

Trooper Aaron Huntsman, a 19-year veteran of the force, was charged with larceny in 2012 for allegedly stealing from 49-year-old John Scalesse, the president of JAS Masonry, as he died from injuries sustained during a motorcycle crash. The investigation began after family members complained to police that jewelry, clothing and $3,700 in cash were missing from the body.

Dashboard camera video later confirmed that Huntsman had walked over to Scalesse, and had taken the gold crucifix from a pool of blood. The cash and crucifix were found inside of his cruiser.

According to the Connecticut Post, Superior Court Judge Robert Devlin said he would sentence Huntsman to 16 months in prison, and five years of probation after the former trooper pleaded guilty to third-degree larceny and tampering with evidence under the Alford Doctrine. Huntsman faced up to 10 years in prison for both felonies.

“John didn’t deserve his memory to be tarnished like this and we are finally glad it’s almost over,” Scalesse’s mother, Marguerite Scalesse said. “After all we have gone through we are glad that he (Huntsman) at least didn’t make us go through a trial.”

Watch the WVIT video report from 2012 below.