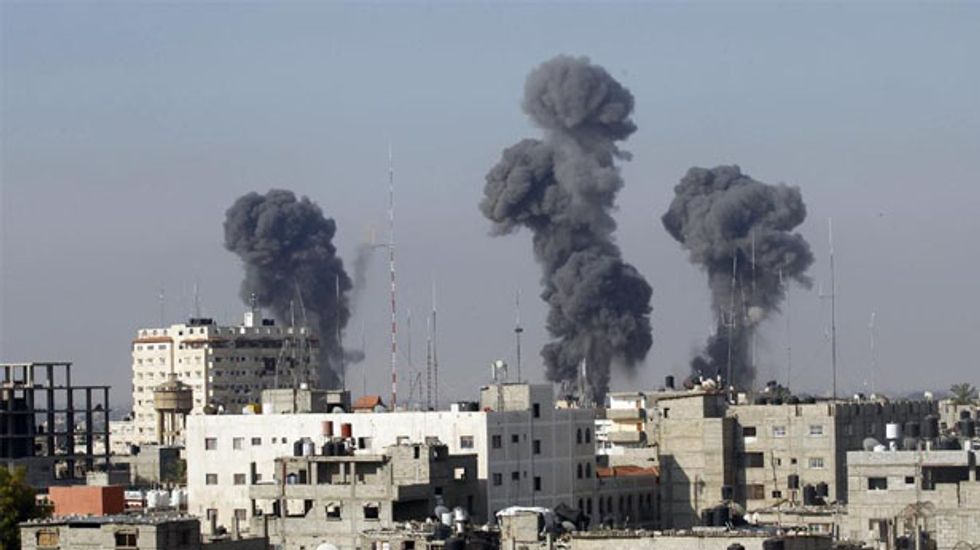 Who knows who lived in the two first-floor apartments above a home for eight disabled adults in a neighbourhood of eastern Gaza.

Perhaps, as a neighbour suggests, one of them was a militant with Islamic Jihad who lived there with his family. But the neighbour says he isn't sure. What is certain is that the occupant was absent in the early hours of Saturday morning when the two Israeli drones "knocked on his roof" – firing warning shots to encourage civilians to vacate the building prior to a strike.

A few minutes later, an Israeli war plane fired a missile into the house. But it didn't detonate on the first floor. Instead, it smashed through to the ground floor where the explosion ripped through the room where five of the disabled residents were sleeping, killing two and injuring the others.

A neighbour found one of the dead, who was missing initially, after he noticed flies buzzing around the place where she was buried. "A body! A body!" the man shouted. Gingerly he lifted the piece of concrete concealing a curly head of hair, face down in the debris.

Atef Abed, a supervisor with the private charity that runs the home, recognised Suha Abu Saada, 47, as her body was dug out of the rubble, one of her legs missing. As small as a child, she had been thrown out of the room where she was sleeping by the blast and buried beneath a concrete wall.

"That's Suha," Abed said as the body was carried past on a mattress covered in a blanket. "Ola Wishaa was 30. She was killed as well. And Ahmed was injured along with Mai and Sali. Luckily two of the other residents were away visiting their families."

It seems a miracle that anyone could have survived a strike that exploded in the very centre of the room where a fin and part of the guidance system remained embedded in the concrete.

A scorched bed stood to on side, damaged by the blast which blew out all the walls and left the palm trees in the garden as truncated stumps standing among the rubble.

"The bomb came straight through the roof," said Mohammad Bahri, a 22-year-old who lives next door. "About 4.30am two drones fired warning shots and then the jet came in and bombed."

The residents were barely mobile, said neighbours, spending their time in bed or in wheelchairs, and could not escape the building.

Imad Abu Shedek denied there had been missile fire nearby. "There was no resistance here. The guy upstairs, I heard he was maybe affiliated with Islamic Jihad, but he wasn't there. The first I knew was when I heard the air strike and got here and saw the bodies."

An Israeli military spokeswoman said she was looking into why the centre was targeted.

The latest deaths came on the deadliest night so far of the campaign, claiming 14 lives.

Other civilian infrastructure damaged in the last 24 hours, according to the UNWRA spokesman Chris Gunness, includes nine of its schools.

The death toll in Gaza, which includes a significant number of civilians, rose overnight to more than 120 after five days of bombing and artillery bombardment, with almost 1,000 injured. There have been no fatalities in Israel.

Israel's defence minister, Moshe Ya'alon, warned in a security briefing that "long days of fighting" were ahead. "We are working to push forward our next objectives. Achievements are accumulating, and we are continuing to destroy significant targets belonging to Hamas and other terrorist organisations."

Both militant factions in Gaza and Israel continued to trade fire on Saturday, with the sound of artillery, guns and air strikes echoing through almost empty streets amid the periodic whoosh of rockets into Israel.

There is growing international concern, and criticism of Israel, over the rapidly rising death toll. The US and European leaders have stressed Israel's right to defend itself, but the UN has expressed its concern over the civilian deaths and anti-Israel protests have been held in Europe.

A senior Arab League official said Arab foreign ministers would hold an emergency meeting in Cairo on Monday to discuss the Israeli offensive and measures to urge the international community to pressure Israel.

The British foreign secretary, William Hague, said on Saturday he was "extremely concerned" about the deaths in Gaza.

The Palestinian president, Mahmoud Abbas, has urged the UN security council to order an immediate ceasefire.

Two mosques were among buildings hit for the first time overnight, according to the militant Islamist group Hamas.

"The bombing of two mosques in Gaza overnight shows how barbaric this enemy is and how much is it hostile to Islam," said Husam Badran, a Hamas spokesman in Doha, Qatar. "This terrorism gives us the right to broaden our response to deter this occupier."

The Israeli military, however, released an aerial photo of the mosque it hit, saying it concealed rockets right next to another religious site and civilian homes.

"Hamas terrorists systematically exploit and choose to put Palestinians in Gaza in harm's way and continue to locate their positions among civilian areas and mosques, proving once more their disregard for human life and holy sites," said Lieutenant Colonel Peter Lerner, an Israeli military spokesman.

Israel has insisted it is determined to end cross-border rocket attacks that intensified last month after its forces arrested hundreds of Hamas activists in the West Bank following the abduction there of three Jewish teenagers who were later found killed. A Palestinian youth was then killed in Jerusalem in a suspected revenge attack by Israelis.