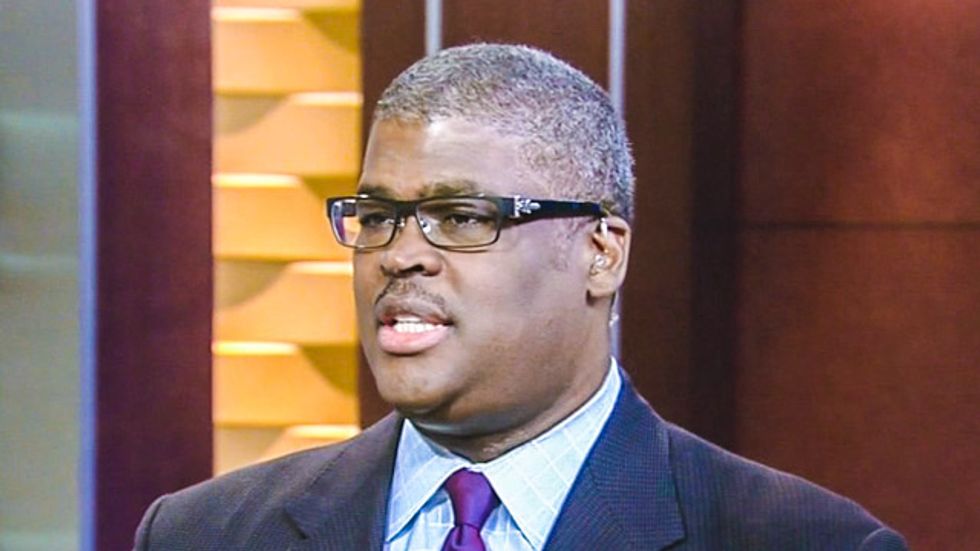 Hosts of Fox News and Fox Business on Monday lashed out at workers who compared their struggle for higher pay to the civil rights movement, arguing that anyone who chose to work a minimum wage job was saying that they were born with "deficiencies" that kept them from getting higher pay.

Over the weekend, fast food workers in Illinois voted to use civil disobedience to fight for $15-an-hour pay, and for the right to unionize.

"It really is insulting," Fox Business host Charles Payne agreed. "It's beyond the pale. Here's one of those things that insults almost everybody. Obviously, it would insult anyone who was involved in the Civil Rights Movement, and also the workers."

The Fox Business host said that to make matters worse, people were "getting these ideas [that] part-time workers should have certain rights... these restaurant workers, minimum-wage workers."

"We're quibbling over things that's really about creating divisiveness," he insisted. "And by the way, it still would be the minimum wage, and I think people out there want to think about maximum."

Payne added that raising minimum wage would really just encourage "people not to embetter themselves."

"If this becomes a civil rights issue, and I can always go and demand more, -- what we're really talking about... there are people in this country who are trying to create a utopian welfare society," he opined. "It's very expensive, and they've got to attack corporate balance sheets to make it work."

In fact, civil rights leader Dr. Martin Luther King Jr. was a supporter of unions, and one of the demands of his March on Washington was an increase in the federal minimum wage.

"We know of no more crucial civil rights issue facing Congress today than the need to increase the federal minimum wage and extend its coverage," King said in a 1966 statement supporting minimum wage legislation. "A living wage should be the right of all working Americans, and this is what we wish to urge upon our Congressmen and Senators as they now prepare to deal with this legislation."