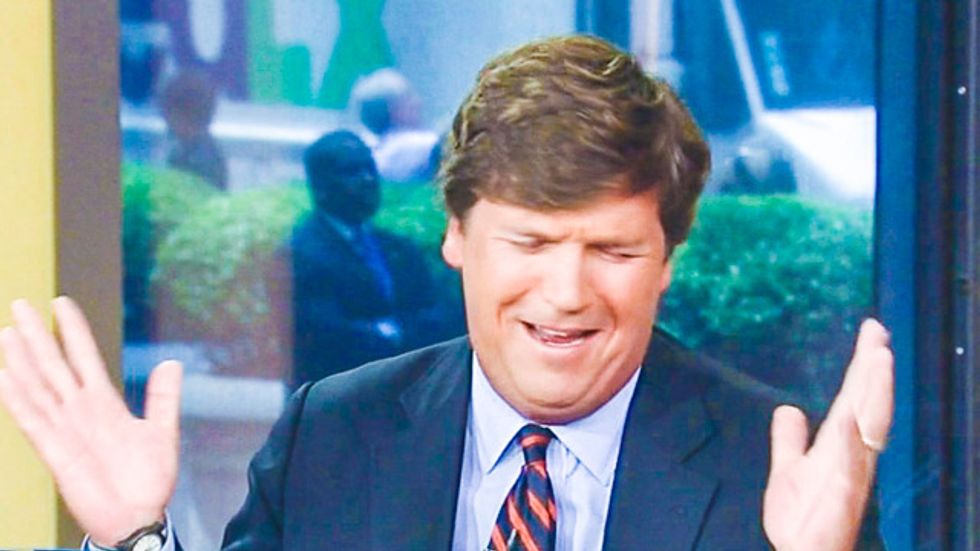 Fox News host Tucker Carlson has converted to secularism -- at least, when it comes to denying help to refugee children who are fleeing violence in Central America.

During a Thursday discussion on the Fox News show Out Numbered, Carlson asserted that President Barack Obama and Democratic lawmakers were "just affirmatively for illegal immigration" because they wanted to deal with the children as refugees instead of deporting them as quickly as possible.

"What the Republicans are trying to do is they are basically trying to take away due process," Fox News analyst Kirsten Powers pointed out. "It's taking away from them the opportunity to actually get a fair hearing to determine whether or not they should be granted asylum."

"What the Republicans want to do is the opposite of humanitarian, and I think that we need to be clear about that," she added. "That's not hawkishness, that's un-American."

"So, you're saying that the United States has an obligation," Carlson interrupted. "Anyone who's suffering around the world has a right to come here and be supported by you and me?"

"Hey, have you ever been to the Statue of Liberty?" Powers shot back. "I'm saying, yes, we are a refuge. We are a refuge to the people of the world who look to us as a 'shining city on the hill.' Does that sound familiar to you?"

"So, I have a moral obligation to share my earnings, and my country with people I've never met because they are suffering?" Carlson complained.

"Are you a Christian?" Powers quipped. "Have you read the Bible? Because the Bible is crystal clear."

"This is not a theocracy!" Carlson exclaimed. "No, no. The country is not run according to Christian precept here."

"I didn't make this up!" Powers argued. "Our country is based on this. You've never heard of America as a refuge of people who are persecuted?"

When Powers asked Carlson if he would have treated Jewish people the same way fleeing violent "pogroms" in the Russian Empire during the 1800s, he refused to compare the situations.

"I'm not even going to engage on that," he said.

As Powers noted, the Bible is clear in Leviticus 19:33-34 that foreigners "must be treated as your native-born" and to "love them as yourself."

Last year, the Secular Coalition for America (SCA) named Carlson's website, The Daily Caller, as the “the most unethical news publication" for its treatment of nonbelievers.

Watch the video below from Fox News' Out Numbere, broadcast July 31, 2014.