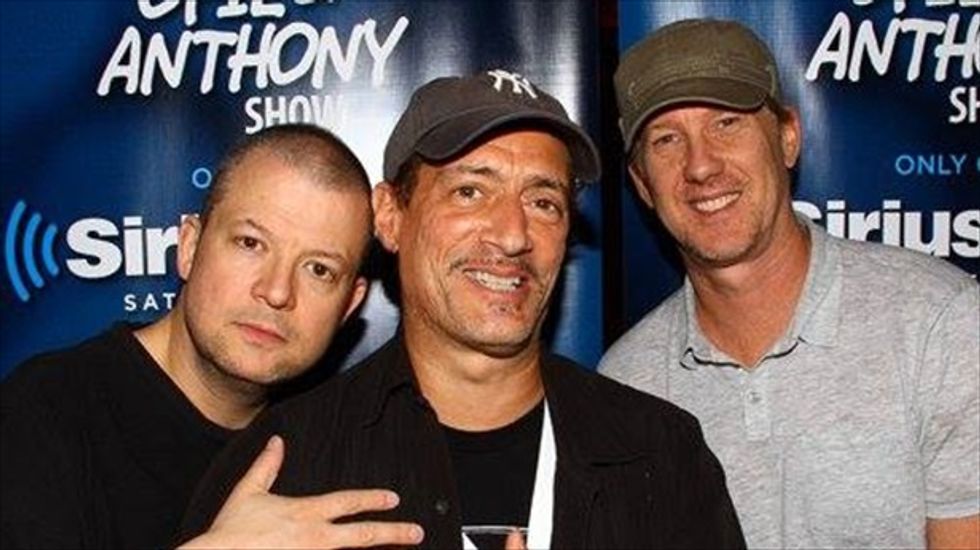 Anthony Cumia, better known to radio audiences as a co-host of The Opie & Anthony Show, was fired on Friday morning following a Twitter tirade in which he accused a group of Black people of abusing him while he was taking a photograph, Buzzfeed reported.

"Sirius decided to cave and fire me," Cumia wrote following the decision by online broadcaster Sirius XM, where the show has aired since 2004. "Welcome to bizarro world. Fired for sh*t that wasn't even on the air & wasn't illegal. So, who's next?"

Sirius decided to cave and fire me. Welcome to bizarro world. Fired for shit that wasn't even on the air & wasn't illegal. So, who's next?

Cumia (pictured above, center) had come under fire after a Wednesday night rant he blamed on being attacked by a Black woman while he was taking pictures in Times Square in New York City. He later posted the picture while referring to the unidentified woman a "whore b*tch piece of c*nt."

The woman, he said, punched him "at least 10 times," leading to a confrontation between himself and a group of African-American men. Cumia claimed that because he is white, he could not retaliate, and then claimed that groups of "savage violent animal f*cks" had overrun the city.

It's a jungle out in our cities after midnight. Violent savages own the streets. They all came 2 defend this pig. I had to yell like at dogs

Savage violent animal fucks prey on white people. Easy targets. This CUNT has no clue how lucky she was. She belted me 10 times. I had a gun

"The decision was made, and Cumia informed, late Thursday, July 3, after careful consideration of his racially charged and hate-filled remarks on social media," the statement read. "Those remarks and postings are abhorrent to SiriusXM, and his behavior is wholly inconsistent with what SiriusXM represents."

But as Jezebel reported on Thursday, Cumia has a long history of targeting African-Americans both on The Opie & Anthony Show and his own podcast.

"Most of the blacks here in the United States have less of an attachment to slavery than I have to f*cking Italy," he once said. "They hear slavery and racism and use it as an excuse to take the path of least resistance which is selling drugs and fucking rolling people for money."